erinwilson
Yellowjackets is a word you never want to end with a period, but with an exclamation point!

They probably annoy you when they invite themselves to your barbecue to partake of your hamburger and other protein-rich foods. They're persistent predators.

But, do you know that they often build their nests near bee hives? "It's one-stop shopping," says postdoctoral scholar Erin Wilson (right) of the Louie Yang lab, UC Davis Department of Entomology.

Wilson, who does research on the Western yellowjacket (Vespula pensylvanica), is the lead author of a research article published in the Nov. 11 edition of Ecology.

On Wednesday, Dec. 1, she'll discuss "Yellowjacket Life History Shifts Modify Invasion Impacts in Hawaiian Ecosystems" at a UC Davis Department of Entomology seminar, set from 12:10 to 1 p.m., in 122 Briggs Hall. The talk, open to the public, also will be webcast live at http://uc-d.na4.acrobat.com/ucsn1/ and then archived on the entomology website.

“The introduction of non-native organisms is a leading cause of imperilment of native species,” says Wilson, who since 2004 has studied the social wasps at two sites: the Hawaii Volcanoes National Park on the island of Hawaii and the Haleakala National Park on Maui.

The yellowjacket “may seriously threaten endemic invertebrates that evolved in the absence of these social insects," she says. "Invasive predators affect native species directly and indirectly, and the magnitude of these effects is highly dependent on the history of the recipient community. Furthermore, the impact of this social wasp may be magnified by apparent shifts in colony structure in the introduced range."

Scientists have found that the incidence of perennial or overwintering colonies is higher in Hawaii than in the native range of V. pensylvanica.

Compared to annual colonies, overwintering perennial colonies can collect twice as many prey items and produce 10 times the worker force, Wilson says. Some perennial colonies were huge, the size linked to Hawaii’s mild climate and the ability of the yellowjackets to establish perennial colonies. One Maui colony included as many as 600,000 individuals.

Yes, that's 600,000 wasps! In its native range, the typical size is less than a few thousand wasps.

Check out Wilson's research article, yellowjacket photos and her website and then listen to her seminar on Dec. 1: 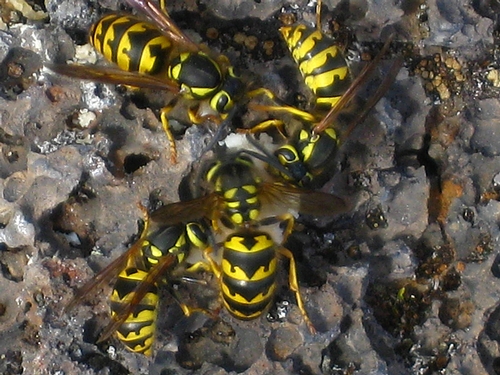 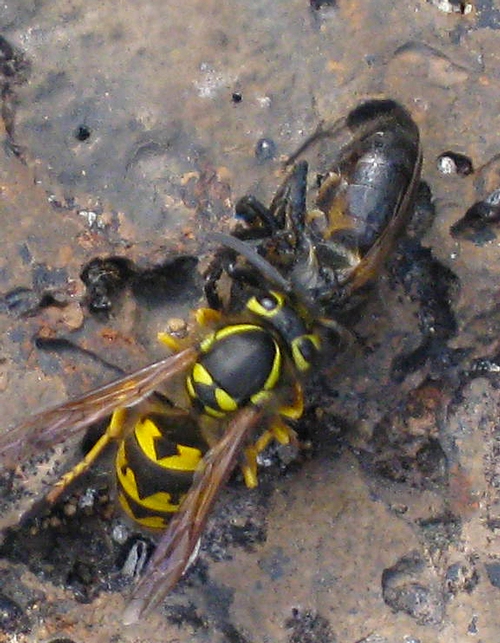 A Kill
YELLOWJACKET killing a honey bee. (Photo by Erin Wilson)
Tags: Vespula pensylvanica. Erin Wilson (1), yellowjackets (3)
Comments: 1
Comments:
by don h. miller, Ph.D
on July 1, 2015 at 10:08 AM
Wasn't familiar with Bug Squad though I had heard of it.
This article on yellow jackets is superb! Many thanks,I
look forward to being privileged to read others.
Leave a Reply: