Bug Squad
sitenum=63
Happenings in the insect world
A Worthy Cause: A Water Bear Sculpture Lynn Kimsey (Photo by Kathy Keatley Garvey)
If you're looking for a worthy cause to support during the giving season (and as a bonus, receive a tax deduction), think tardigrades, aka water bears.

Or more specifically, think "sculpture in front of the Bohart Museum of Entomology at the University of California, Davis."

The Bohart Museum, which owns one of the world's largest tardigrade collections, plans to install a tardigrade sculpture to grace its entrance, says director Lynn Kimsey, professor of entomology at UC Davis.

The Bohart Museum Society has set up a GoFundMe account: see https://www.gofundme.com/f/waterbear-sculpture.

"The reason for this is that we have one of the world's largest tardigrade collections, which was compiled by (senior museum scientist) Steve Heydon's predecessor, Bob Schuster," Kimsey explained.  "This collection is the result of years of collecting, mounting, imaging, and identifying by former collection manager Bob Schuster and emeritus professor Al Grigarick and their collaborators."

The Bohart collection includes some 25,000 slide-mounted specimens. Kimsey and collaborator Carl Johannsen work on a National Science Foundation grant to database and conserve the collection.

Kimsey says this about tardigrades:

Kimsey has been in touch with sculptor Solomon Bassoff (Faducciart) in Roseville. "He did the caterpillar in the Davis Central Park."

The donations are coming in.

"Tardigrades are awesome," Kimsey said, marveling that "They can dry out completely and then become immortal. In fact, SpaceIL may have left thousands of dried tardigrades on the moon when it crashed earlier this year."

And on the horizon: a one-of-a-kind, talk-of-the-campus tardigrade sculpture. 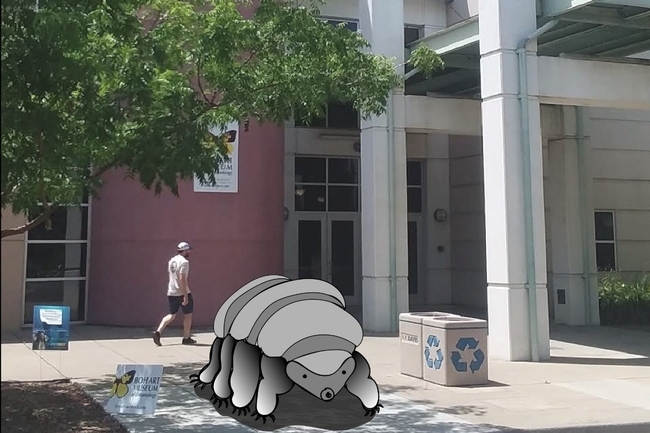