Across the Country
Published on: December 11, 2019
This summer my husband and I have been busy traveling across the country with destinations in the state of North Carolina and Florida. This blog will focus on NC, which I have to say, I am enthralled with. The landscape of those interstate highways, particularly Interstate 85 and the adjacent roads and byways are delightful.
My last drive between Charlotte and Raleigh took a little over 3 hours but it could have taken much longer if I had been allowed to take my time. Allas, the posted speed limit is 70 mph and given the dry sunny weather it seemed to be a mere suggestion. Highway 85 is multiple lanes for each direction as you would expect but the natural pine forests line the highways either side and it seems every other sort of road as well. The space between and on each side of the road is maintained as if it were a park setting which is mowed and planted with ornamental grasses, Crepe Myrtles, and perennials.
As I am a native Californian, I have taken our freeways and highways for granted as a means of getting from one place to another. The thought of a “landscaped” terrain frankly never entered my thoughts. That was until I started driving in this enthralling landscape. When not on the interstates I could hardly contain myself from stopping to photograph the scenery laying before me, it was mesmerizing.
As I was nearing Charlotte heading west on Interstate 85 I noticed groupings of gorgeous dark maroon penstemon-like ornamental grasses, the stalks were full  maybe 3 1/2 to 4 feet tall. The Penstemon genus is the largest endemic group of flowering plants in North America. Commonly known as “Beardstongue”, I can relate to the name as the thickness and color did resemble a chorus of very dark bushy beards singing in the breeze.
Heading eastward on 85 for the first time I was shocked to see the plantings of banks of perennials to the sides and in the median lawns, is this real? Maybe if I spent more time driving out of state I would have encountered landscaped roads. I must say for me it provided a calming effect and gave me a peaceful serenity.
What a different landscape when there is that scarce resource called “rain” throughout the year. Back home now and we are now into fall. Leaves are turning and the breezes can blow from the inland as well as offshore. In a few weeks, we should start receiving some rain as well which will relieve our parched landscape. 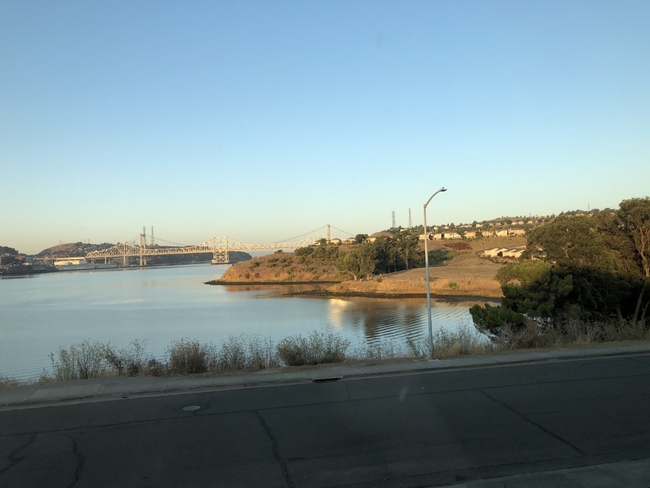