It was one of the last summer days – sunny with only the slightest nip in the air.  Perfect weather to look over my garden and enjoy the remaining flowers and veggies and look forward to next year.  Rather suddenly our mastiff, a reliable beacon of activity around the perimeter of our house, began to put out a ruckus.  I went to the front door but before I opened it I realized that the dog, Millie is her name, was looking up the street rather than out front.  I followed her head and there were 3 turkeys coming up the driveway.  That was fun. So I went out the back of the house to get a better view trying to stay out of sight enough to not disturb them.

I have a very full wisteria growing on an arbor along the roofline and I snuck near it off the back of the house.  Millie didn't come outside but made her presence known and made sure I didn't miss the presence of our visitors.  As I backed away from the house I could see one turkey above the wisteria.  Then there was an increasing clatter.  The alpha turkey headed off, I thought to go to my neighbor's roof, but actually going over our property to a greenway next to our back fence.  And then there was a din of flapping, squawking, and barking to beat the band and a flock (if that is what one calls a group of turkeys) often lined up on the roof and one by one took off to the greenway.  They landed and noisily took off on foot into the grasses.

Then all was quiet, Millie's job was done.; she had a drink and went to sleep.  We both had a snack and I went back to weeding.  Nature was good to us.  Harbinger of the holiday season to come. 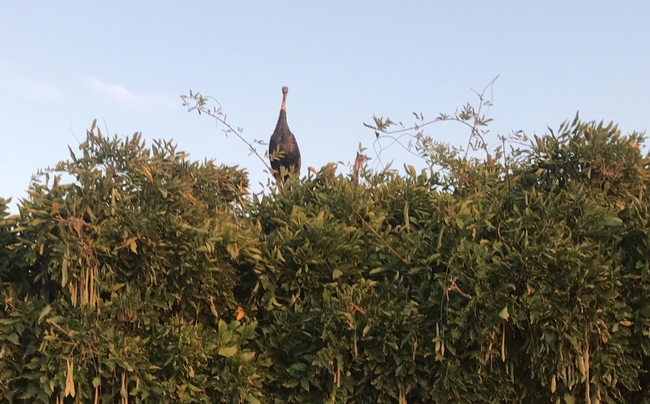