Anita Oberholster, project director
UC Davis scientists, in collaboration with UC Berkeley and Oregon State University researchers, are leading a $3 million federal grant targeting the grapevine red blotch virus and its vectors. The disease threatens the $162 billion grape industry and is described as an "urgent problem."

The four-year grant, "Ecobiology, Impact, and Management of Grapevine Red Blotch Virus and Its Vector(s) in California and Oregon Vineyards,"  from the U.S. Department of Agriculture's National Institute of Food and Agriculture (USDA-NIFA), continues through August 2023.

Oberholster said the virus affects both white and red grape varieties and can have a "significant impact on wine quality."  Integrated pest management specialist Frank Zalom, distinguished professor in the UC Davis Department of Entomology and Nematology, and Rachael Goodhue, professor and chair, UC Davis Agricultural and Resource Economics, serve as co-directors. Frank Zalom, co-project director
First identified in 2012, the disease affects grapevines of all varieties and is internationally present. Symptoms typically include red blotches on the leaves of red varieties, and pale green or pale yellow blotches on white varieties.

In a greenhouse study in 2016, members of the Zalom lab and his USDA-ARS research collaborator Mysore ‘Suhdi' Sudarshana of the UC Davis Department of Plant Pathology found that the three-cornered alfalfa hopper, Spissistilus festinus, transmitted the virus. Prior to their discovery, the treehopper was considered only an occasional pest due to its feeding and egg laying that girdled stems, causing the portion of the plant above the girdle to turn red on red grape varieties. Rachael Goodhue, co-project director
"Although our knowledge of red blotch virus and its spread has improved in the short period of time since it was first discovered, there are still many questions to be answered in order to understand its epidemiology and develop an effective management strategy," Zalom said. "For example, we need to understand mechanisms for how the virus affects grapevines, and if there are additional vectors." 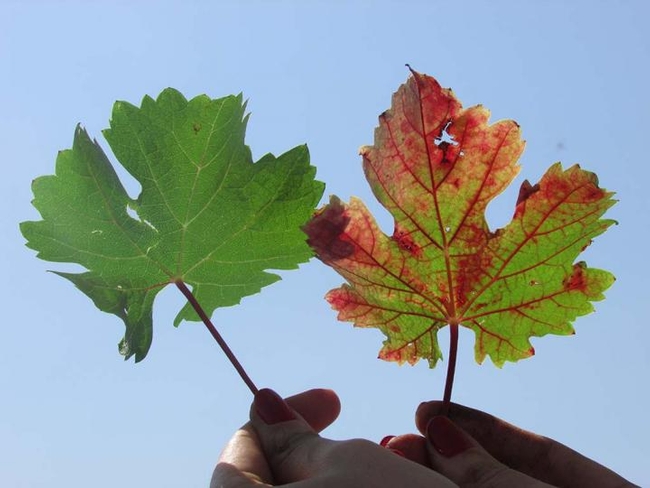 Grapevine red blotch disease, depicted on the right leaf, can have a significant impact on wine quality. (Raul Girardello/UC Davis) 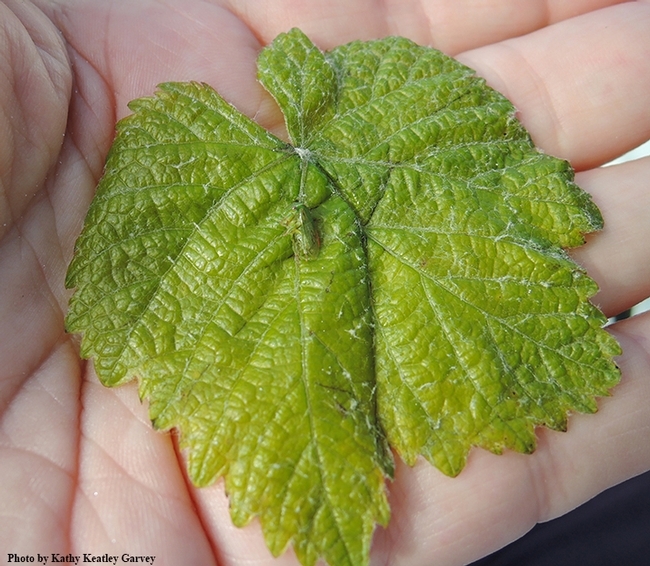