Hanna Kahl (left) and Jill Oberski of the UC Davis Linnaean Games Team listen to the question asked. (ESA Photo)
Members of the national award-winning University of California Linnaean Games Team competed in the Linnaean Games at the recent Entomological Society of America (ESA) meeting in St. Louis, Mo., but this time they didn't take home a trophy.


The team was eliminated in the first round. Some logistics issues--microphone mishaps and difficulty hearing the questions (issues later resolved)--complicated the session.

Washington captained all four recent teams, and Boudinot helped anchor all of them. Some logistics issues complicated the first round of the Linnaean Games. Here UC Linnaean Games Team captain Ralph Washington Jr. (right) strains to hear. At left is Brendon Boudinot. (ESA Photo)
All branches of ESA conduct a Linnaean Games competition, with each branch sending the winner and the second-place winner to the nationals. The UC team has won the Pacific Branch (PBESA) competition multiple times. PBESA encompasses 11 Western U.S. states, plus several U.S. territories and parts of Canada and Mexico.

Some of the previous questions asked of the UC team during the championship rounds:

Question: What is the smallest insect that is not a parasite or parasitoid?
Answer: Beetles in the family Ptiliidae.

Question:Some species of mosquitoes lay eggs that can undergo diapause or aestivation. Give at least three cues that trigger the aquatic eggs to hatch.
Answer: Temperature, immersion in water, concentration of ions or dissolved solutes.

Question: A Gilson's gland can be found in what insect order?
Answer: Trichoptera Matan Shelomi, a former member of the UC Davis Linnaean Games Team, served as a volunteer at the Games. He is now on the faculty of the National Taiwan University, Tapei.
Question: Certain Chrysomelid larvae carry their feces as a defensive shield. To what subfamily do these beetles belong?
Answer: Cassidinae.

Question: In what insect order would you find hemelytra?
Answer: The order Hemiptera.

Question: A 2006 Science article by Glenner et al. on the origin of insects summarized evidence that Hexapods are nothing more than land-dwelling crustaceans, which is to say that the former group Crustacea is paraphyletic with respect to the Hexapoda. What hierarchical name has been used to refer to this clade?
Answer: Pancrustacea

Founded in 1889, ESA is the world's largest organization serving the professional and scientific needs of entomologists and individuals in related disciplines. It is comprised of more than 7000 members, who are affiliated with educational institutions, health agencies, private industry, and government. Members are researchers, teachers, extension service personnel, administrators, marketing representatives, research technicians, consultants, students, pest management professionals, and hobbyists. 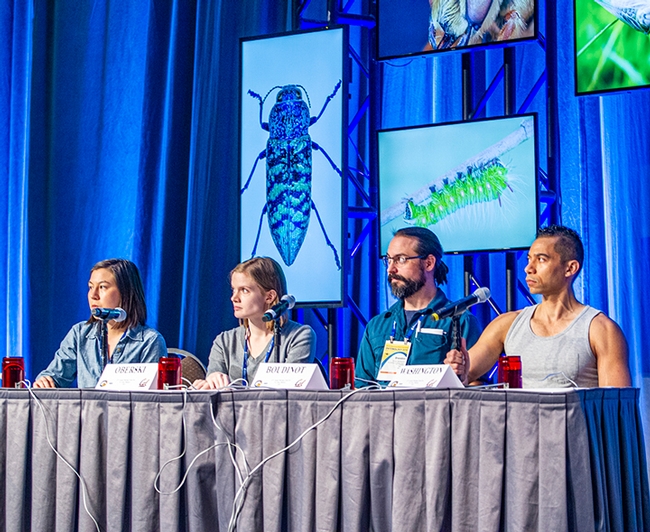