The sign in front of the USDA-ARS facility. (Photo by Kathy Keatley Garvey)
On a day too cold for honey bees to fly and nearly too cold for bundled dignitaries to speak, officials celebrated the opening of the newly constructed USDA-ARS bee research facility on Bee Biology Road, UC Davis campus.

Queen bee breeder Jackie Park-Burris, a past president of the California State Beekeepers' Association and a leader in the industry, snipped the ribbon Jan. 7 in 45-degree temperature, joining a group of other stakeholders to open the U.S. Department of Agriculture's Agricultural Research Service (USDA-ARS) bee research facility.

The facility, located next to the UC Davis Department of Entomology and Nematology's Harry H. Laidlaw Jr. Honey Bee Research Facility, slides Davis into the national spotlight as "Pollination Central" and "The Bee Capital of the World." The Davis facility is the newest of five USDA bee research labs in the United States and as the only one in California. Pratt introduced newly hired research entomologists, Arathi Seshadri and Julia Fine, forming the Invasive Species and Pollinator Health Research Unit at Davis. They are dedicated toward developing technology that improves colony survivorship through long-term studies of multiple stress factors, he said. "They will develop and transfer integrated biologically based approaches for the management of invasive species and the improvement of pollinator health.”

Seshadri and Fine aim to improve honey bee survival and beekeeping sustainability in California and nationwide, Pratt said. They will collaborate with federal, university, non-governmental and industry partners.

Seshadri, a pollination biologist with expertise in honey bee behavior and plant reproductive strategies, will be working with beekeepers and farmer stakeholders to develop projects aimed at finding solutions to the ongoing pollination challenges. Also trained as an evolutionary biologist, she has applied principles of plant-pollinator mutualism, specifically the impact of phytochemicals in pollen and nectar on honey bee health and colony performance. Her contributions to pollinator conservation include enhancing the sustainability of all pollinators, including native bees on farms and urban areas. She also has expertise in agroecosystem-based approaches and citizen science programs to promote pollinator diversity and abundance.

Fine, an entomologist with expertise in insect toxicology, honey bee physiology, reproduction and development, focuses her research on identifying how stressors impact honey bee behavior, health and fecundity. She uses both established and novel laboratory techniques. Her previous projects involved investigating how agrochemical and viral stressors interact to affect the development and survival of honey bee brood and how nutritional stress affects honey bee queen fecundity. In engaging with beekeepers and growers, Fine will research how realistic biotic and abiotic stressors affect honey bee reproduction, longevity and pollination services, and she aims to identify techniques and strategies to overcome these effects. “We don't need to tell the people here how important honey bees are to agriculture, to the natural environment and the importance of minimizing costs to honey bee industry,” Matteri told the crowd. He noted that researchers, through collaboration and cooperation, have made great strides in nutrition, physiology, pathology, environmental factors.

"We've learned a lot,” Matteri said, “and we're looking forward to many good things to come.”

'Bee Capital of the World'
Associate Dean Oberbauer, pointing out the many “individuals focused on apiculture on the UC Davis campus,” described Davis as “the bee capital of the world.”

“The location of this new honey bee lab right next to the Harry H. Laidlaw Jr. Honey bee Research Facility… offers faculty, students and USDA a unique opportunity for expanding partnerships, internships and collaborative research for faculty and students,” she said.

The associate dean lauded the UC Davis research, teaching and public service in apiculture and the what's to come. “We are extremely fortunate and pleased to have this new USDA honey bee lab so close to our researchers and we look forward to this continued partnership in the years to come,” Oberbauer concluded.

USDA's Pacific West Area Director Hackett told the crowd that “for me, this is a homecoming.” After receiving his doctorate at UC Berkeley, he worked in research with UC Davis Professor Robbin Thorp (1933-2019), when “American foulbrood was a hot topic.”

Hackett thanked stakeholders for “your help in bringing this lab here…Your funding on behalf of industry is what made this bee lab come about and we really thank you for that.” He singled out the American Beekeeping federation, American Honey Producers' Association, California State Beekeepers' Association and Almond Board of California.

“With this Davis lab," Hackett said, "we are situated in Pollination Central, in the heart of the almond and tree fruit industry."

“Varroa mites” topped the list of concerns at the November 2015 stakeholder conference, Hackett pointed out, adding that “It will be studied in context with other stressers such as pesticides.”

“We're really looking forward to solving ALL the bee problems,” Hackett quipped, to applause. Research will include “how do you combine treatments to improve honey bee health especially from protecting bees from varroa in this agriculturally intensive, high pollination unit location.”

“By working together we will be able so synergize all of our efforts to help the bee industry and to ensure pollination in country's major specialty crops,” Hackett said. Harry H. Laidlaw Jr., father of honey bee genetics
History of the Bee Program
Extension apiculturist Elna Niño chronicled the history of the bee biology program at UC Davis. The first bee instructor was George Haymaker Vansell (1892-1954) a USDA employee in the Davis Experiment Station. A former student at UC Davis, he taught from 1920 to 1931. His research led to a better understanding of the role of bees in crop pollination.

'We Are Grateful'
In her talk, Park-Burris said that the “California State Beekeepers' Association is overwhelmed that we have a USDA lab to collaborate with our UC Davis lab. We hope there's a lot of collaboration going on. We really look forward to that. As a stakeholder, my family has been raising queens just north of here (Palo Cedro) for over 80 years. Dr. Laidlaw had worked with my uncle and my father. He's been at my house. And he's been through my bees. Julia (Fine) has even already been up to see the queen farm.”

Extension apiculturist emeritus Eric Mussen later commented: "I think that the collaboration among the new USDA bee lab personnel, cooperating researchers, and beekeepers should provide an opportunity to probe deeply into potential causes of colony loss.  The ability to follow the health of individual bees and colonies, throughout the year, should provide important clues about precursors of colony decline, well in advance of the ultimate collapse." 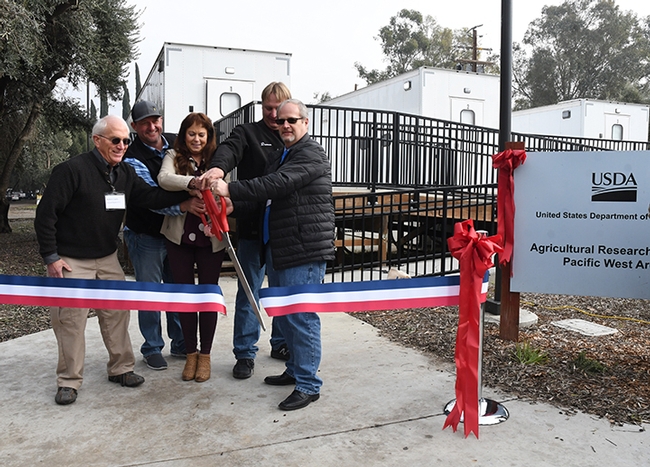 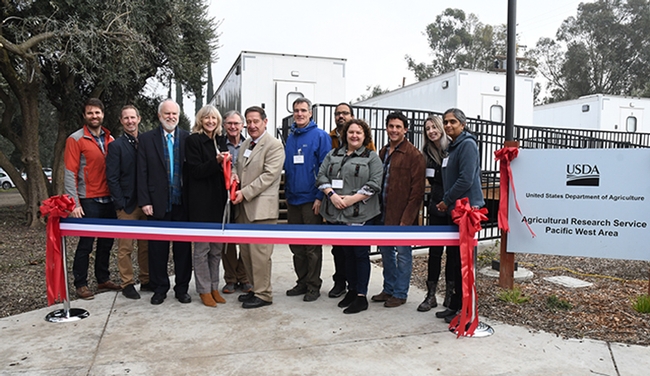 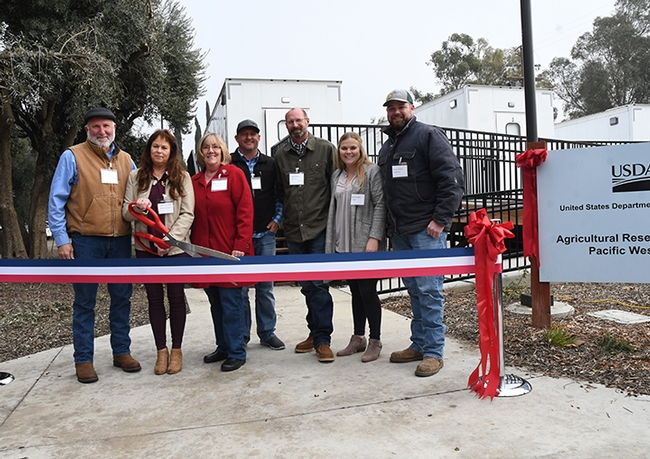 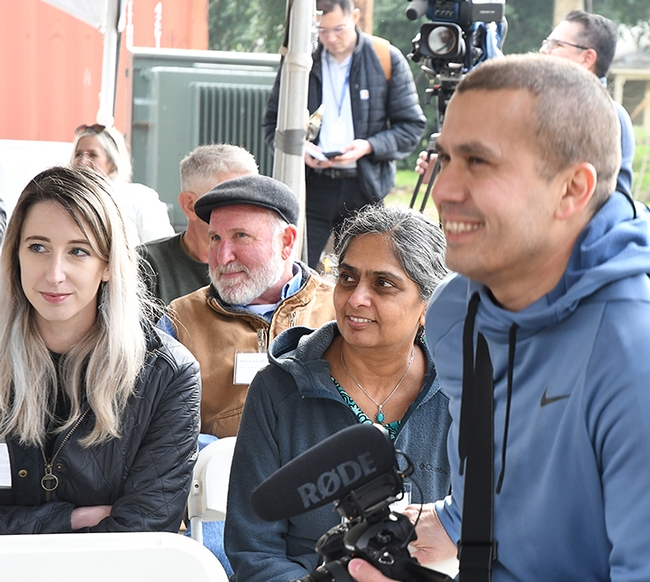 USDA-ARS research entomologists Julia Fine (left) and Arathi Seshadri listen to the speakers at the opening of the USDA-ARS lab. In back is Steve Godlin of the California State Beekeepers' Association. (Photo by Kathy Keatley Garvey) 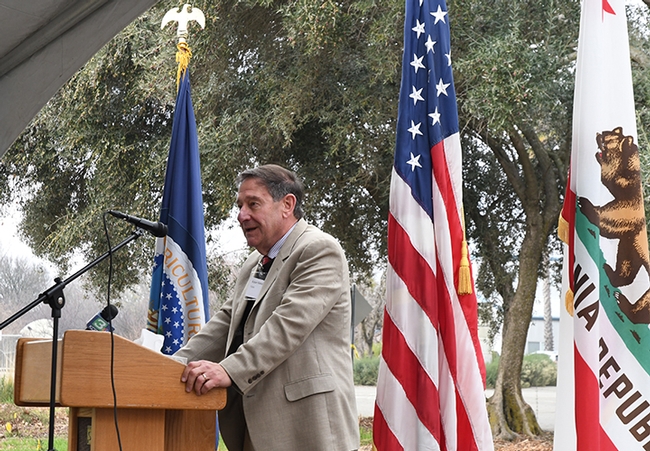 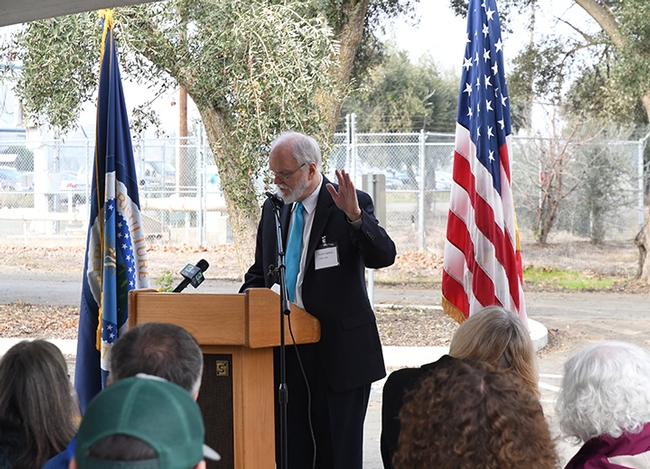 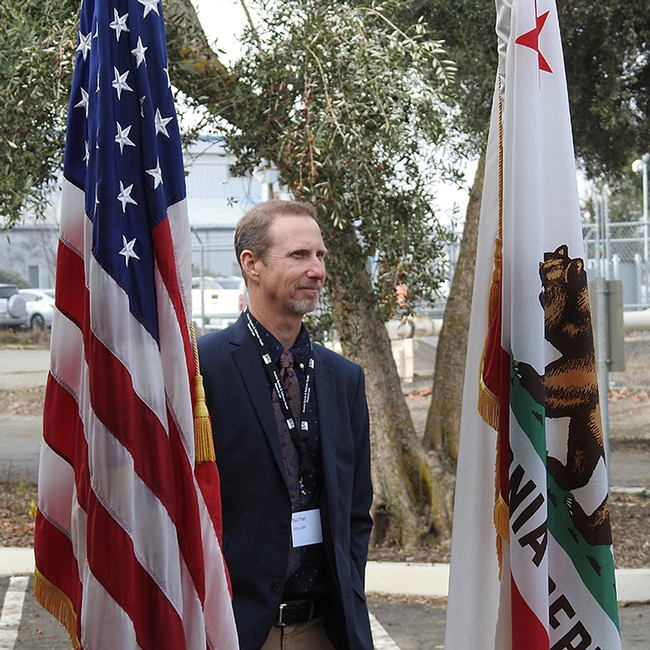 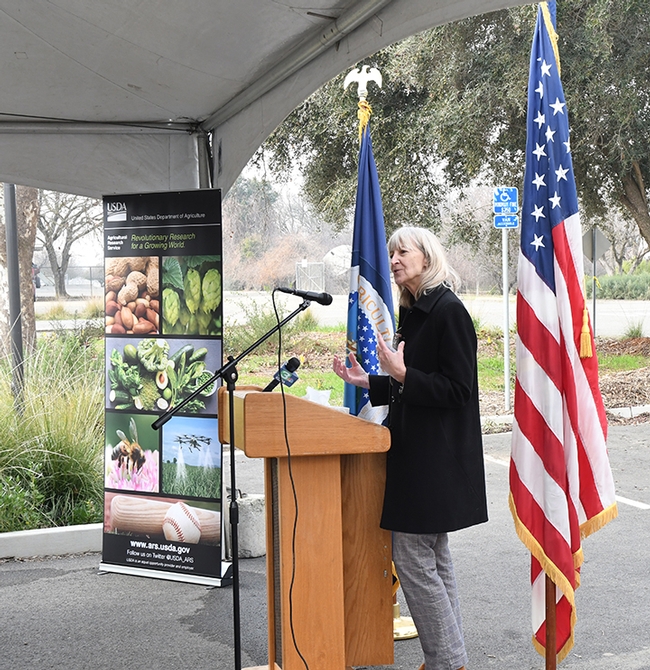 Anita Oberbauer, associate dean, UC Davis College of Agricultural and Environmental Sciences, tells the crowd that Davis is "the bee capital of the world." (Photo by Kathy Keatley Garvey) 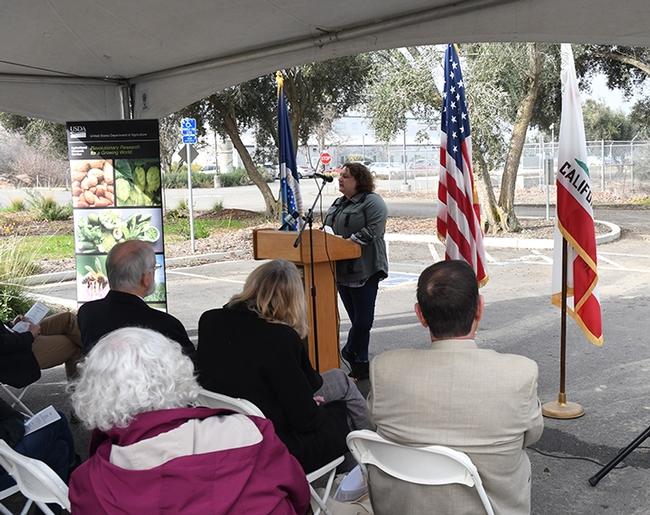 Extension apiculturist Elina Lastro Niño of the UC Davis Department of Entomology and Nematology and founder and director of the California Master Beekeeper Program chronicled the history of the Davis bee biology program. (Photo by Kathy Keatley Garvey) 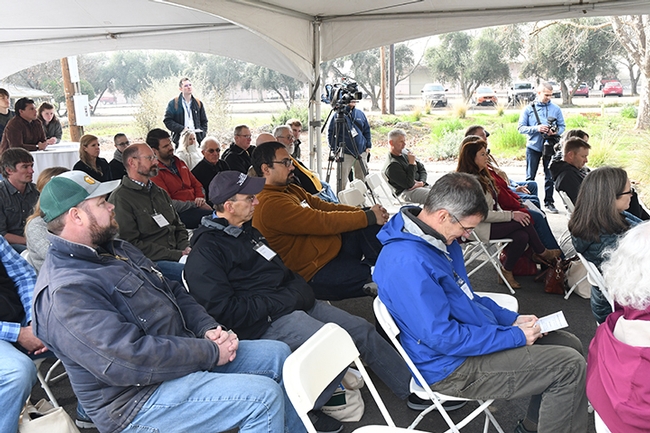 Crowd at the opening of the USDA-ARS lab faciity. In the blue jacket is Professor Neal Williams. Behind him (dark cap) is Steve Nadler, professor and chair of the UC Davis Department of Entomology and Nematology and next to him (on far right) is associate professor Brian Johnson. (Photo by Kathy Keatley Garvey) 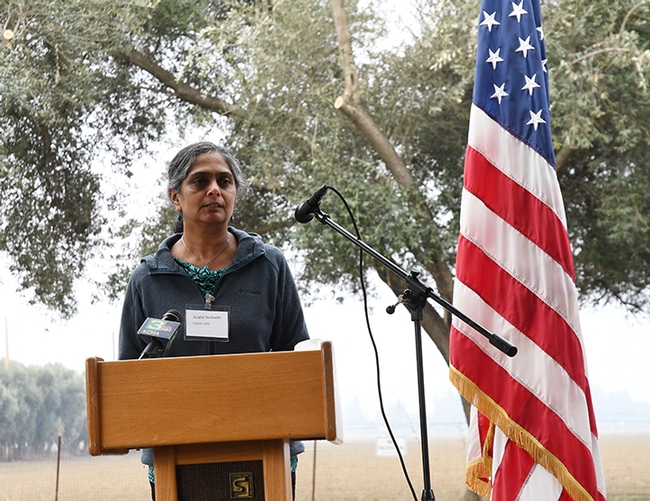 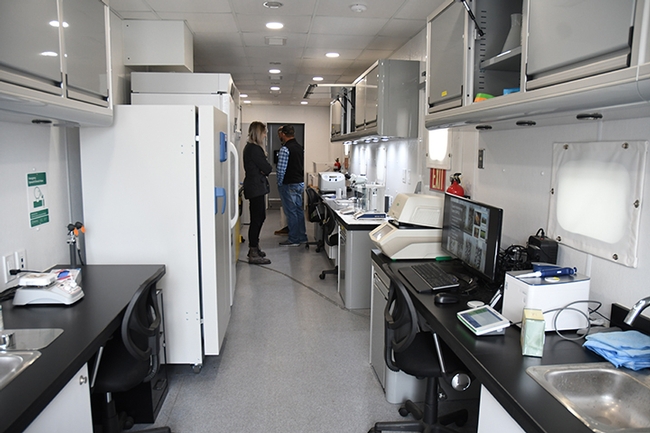 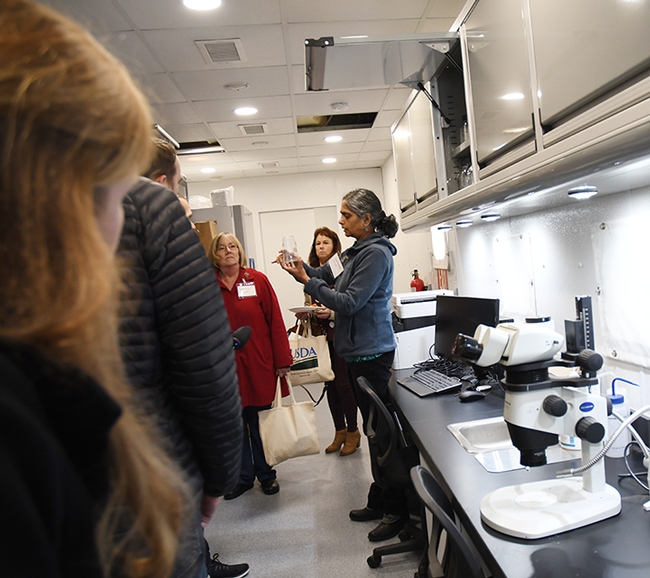 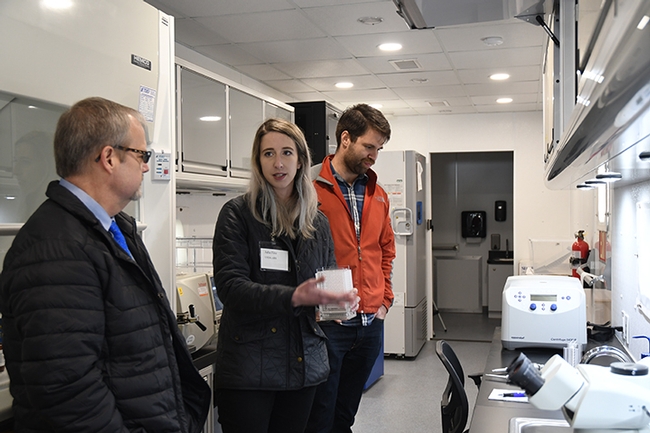 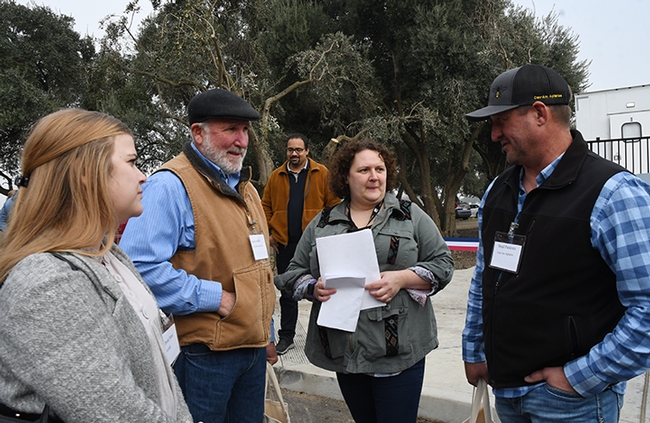 Extension apiculturist Elina Lastro Niño (center) chats with California State Beekeepers' Association (CSBA) affiliates. From left are Brooke Palmer and Steve Godlin of CSBA, Niño and Brad Pankratz of CSBA. In back is Brian Johnson of the UC Davis Department of Entomology and Nematology faculty. (Photo by Kathy Keatley Garvey) 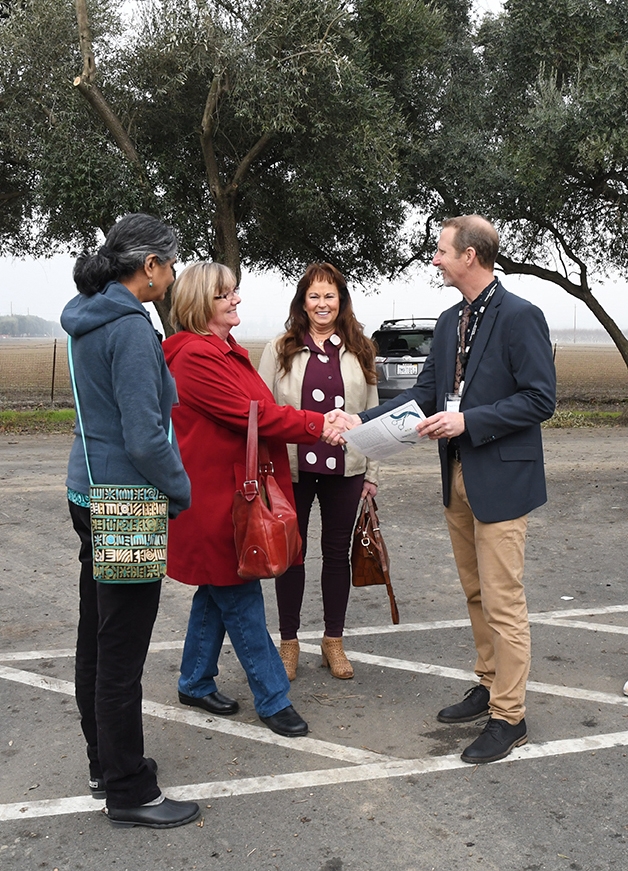