Entomology & Nematology News
sitenum=270
UC News about Entomology and Nematology.
Elizabeth Crone: 'Why Are Monarchs Declining in the West?'
Published on: January 23, 2020 Professor Elizabeth Crone at UC Davis Stebbins Cold Canyon Reserve.
"Why Are the Monarch Butterflies Declining in the West?"

When Professor Elizabeth Crone of Tufts University, Medford, Ma., zeroes in on that topic to the UC Davis Department of Entomology and Nematology, she will discuss the challenges that both monarchs and ecologists face.

Her seminar is from 4:10 to 5 p.m., Wednesday, Jan. 29 in 122 Briggs Hall. Her longtime collaborator, pollination ecologist and professor Neal Williams, will introduce her.

"Ecologists now face the dual challenge of documenting changes in the environment, and figuring out appropriate strategies for conserving and recovering natural resources in changing environments," says Crone, who is completing a research sabbatical at UC Davis.

In her talk, she will focus on “using the tools of population ecology to address both sides of this challenge: quantifying changes in the abundance of western monarch butterflies (and factors associated with these changes), and using theory and data to design strategies and targets for restoration and recovery.”

“Analyses of past dynamics (1980-2017) showed that western monarch butterflies have declined more quickly than their eastern counterparts, and that these declines were most strongly associated with loss of overwintering habitat, and more weakly (but significantly) associated with increased pesticide use and warmer breeding season temperatures,” Crone writes in her abstract. “Analyses of current conditions (2018-2019) suggest that a recent dramatic drop in abundance occurred in spring, between when monarch butterflies leave coastal overwintering sites and arrive in the Central Valley and Sierra Foothills.”

“Surprisingly, we don't really know where western monarch butterflies are during this time period, roughly mid-February through mid-May," Crone says.  "Future research will focus on filling this knowledge gap, as well as building quantitative knowledge of the western monarch demography throughout their complex annual life cycle, which is needed to understand the relative contributions of habitat at different points in the life cycle to population declines and recovery.”

The Xerces Society for Invertebrate Conservation reported this week that its Western Monarch Thanksgiving Count shows a decline for the second consecutive year. “Sadly, fewer than 30,000 monarchs were counted—29,418 to be exact—for the second year in a row, so the western monarch population remains at a critical level,” according to Matthew Shepherd, director of communications and outreach.  (See press release and a blog article about the population count for this winter.) Overwintering monarch butterflies on Nov. 26, 2015 at Natural Bridges, Santa Cruz. (Photo by Kathy Keatley Garvey)
No stranger to UC Davis, Crone has collaborated with Neal Williams "on and off" for the past 20 years.  “We had a National Science Foundation grant to study bumble bee populations from 2014-2019, so I have been visiting regularly since he got here.  Starting in winter 2019, I have also had funding to take partial research leave from Tufts and work on western monarchs.  I have been about half-time at Tufts and half-time at UC Davis."

"I am grateful to Neal and the Entomology Department for hosting me during this extended stay!" she added.

Of her research, Crone says "My research focuses on population ecology, especially of plants and insects, and plant-animal interactions. Specifically, I am interested in how environmental changes translate to changes in population dynamics: For example, is there a simple, linear matching of changes in resources to abundance of consumers, or do interactions among individuals and species moderate these responses? Much of my research also involves developing novel quantitative approaches to predict long-term dynamics from small scale observations and experiments. Current projects include studies of butterflies, bees, perennial wildflowers, sugar maples, and acorn-granivore interactions. Past projects include some of the best documented examples of cyclical dynamics in plant populations and spatial metapopulation dynamics in animal populations. I was also one of the first ecologists to adapt generalized linear mixed models to estimate variance terms for stochastic population models."

Of her teaching: "I am interested in introducing people to general principles of ecological theory, as a guide to interpreting data and understanding the potential implications of environmental change. Making this link requires training students to understand basic biology and natural history, while knowing how to approach problems like a mathematician. I have a strong track record of training graduate students who have gone on to work in quantitative ecology, and in teaching lecture courses that introduce biology students to modeling and statistics. In biology classes, students expect to understand material as it is presented in class, and use time outside class to explore these ideas further, or memorize facts. In math classes, students do not expect to understand the material as it is presented; many of the best math majors come to understand the ideas later by working through problem sets. This difference means that biology students find math classes intimidating and tend to underestimate their own math skills. My approach is to start with tractable problems, and introduce students to the approach of learning by doing problem sets, in the context of ecologically-motivated problems."

Her honors and awards are many:

How did you get interested in science? Was there an "ah ha" moment?

I was in an REU (Research Experiences for Undergraduates) program studying plant-insect interactions in 1990.  The thing that made me want to go to grad school was the fun puzzle of designing an experiment AND figuring out how to interpret the data - I had collected data on beetle feeding rates, and when I didn't know how to analyze them my advisor said "read a statistics book" ... so I did--since then I have always especially loved the puzzle of matching models to data.

From an earlier age, I have always enjoyed being outdoors, which is probably why I chose to study biology.  But that was the moment when I knew I would enjoy a life of research.

Some of your major accomplishments?

From an applied ecology perspective, the biggest is helping the Fender's blue butterfly move from being listed as endangered to nearly ready for down-listing.  From a basic ecology perspective, I figured out the ecological interpretation of variance terms in mixed models as estimates of spatial heterogeneity and environmental stochasticity, and worked out one of the best examples of how mast-seeding species are synchronized by their pollinators.

What fascinates you about monarchs?

The possibility that we can recover the western monarch population from its recent steep decline to being abundant again.  This should be a problem we can fix.

The puzzle of matching models to data and the possibility of saving species from extinction.

Any scientists in the family?

My sister is an astronomer.  My dad was a math professor.  Before him, though, no one in the extended family had even gone to college.

What do you do in your leisure time?

I once gut-renovated a house (with help from carpenters, but doing some of the work myself), I am very proud of my urban pollinator garden in Somerville (near Boston, Mass., and I am a good enough trombonist to (just barely) keep up with my trombonist friends.

I am waiting to find out whether our monarch funding will be extended or whether I will go back to a regular teaching schedule at Tufts.  Even if I go back to "full-time" teaching, I am sure I will be doing western monarch and bumble bee research for the indefinite future, and will continue to be at least partly bicoastal.

(Editor's Note: the Xerces Society's site-by-site monarch count data is available at https://www.westernmonarchcount.org/data/. This covers all years since the first count in 1997.) 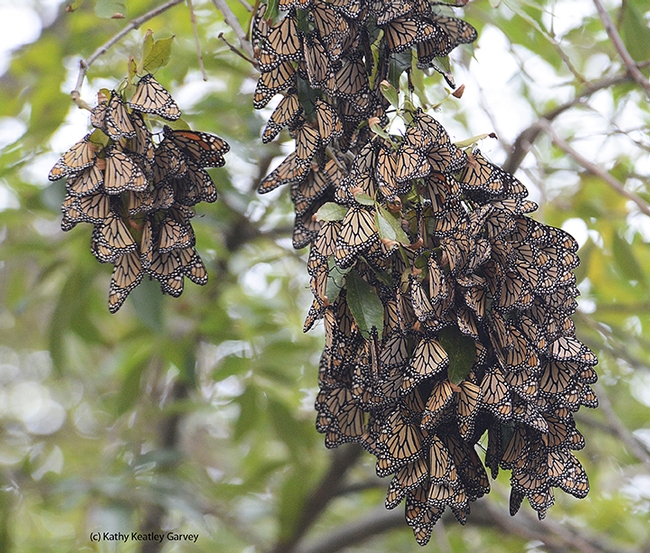