Proper pruning and tree care are important in most trees, including citrus and avocado. The question of what decay fungus is happening to a tree often comes up and a recent UC publication can help answer that question

Wood Decay and Fungi in Landscape Trees by Downer and Perry

The other question of what to do about the fungus is answered, as well. Check it out.

IDENTIFICATION AND BIOLOGY OF DECAY FUNGI

Many wood decay fungi can be identified by the distinctive shape, color, and texture of the fruiting bodies they form on trees. These fruiting bodies take several forms, depending upon the fungus that produces them, but most of them fit into categories commonly referred to as mushrooms, brackets or conks. They often grow near wounds in bark, including old pruning wounds, at branch scars, in proximity to the root crown, or near surface anchor roots. Some decay fungi, such as Armillaria mellea, produce fleshy mushrooms at the base of infected trees or along their roots, often after rain in fall or winter. All mushrooms and some bracket fungi are annual (i.e., appearing and disappearing seasonally), but many conks are perennial and grow by adding a new spore-bearing layer (hymenium) each year.

Decay fungi are divided into those that attack heartwood (causing heart rots) and those that attack sapwood (causing sap rots and canker rots). Further subdivision is based on the appearance of the decayed wood (i.e., white rots, brown rots, and soft rots) or location in the tree (the decay is called a butt rot if it is at the base of the trunk). Canker rots usually appear on branches or the trunk. When a fruiting body is visible on a tree, it is usually associated with advanced decay; the extent of decay may be far above or below the location of the fruiting body. Trees with extensive sap rot may show symptoms of decline, including increased deadwood and a thinning canopy with reduced density of foliage. 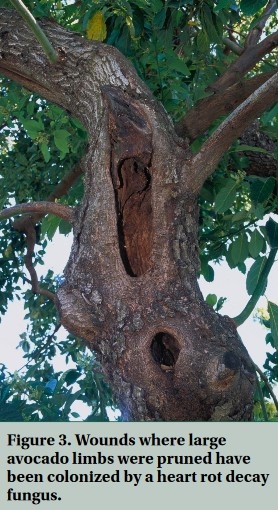