Chinese farmers take a bite out of the California cling-peach market
Published on: January 31, 2011

California cling-peach growers' market dominance is beginning to erode in the face of cheap cling-peach imports from China, according to an article in today's Fresno Bee.

Imports of lower-priced Chinese canned cling-peaches grew from 43,000 cases 10 years ago to more than 2.2 million last year, the article said. Chinese peaches now represent 12 percent of the 16 million cases consumed in the U.S.

To defend their turf, California growers are looking for ways to reduce their production costs. Bee reporter Robert Rodriguez spoke to UC Cooperative Extension farm advisor Roger Duncan about his research with German-made equipment that would cut the cost of spring hand-thinning, a practice that ensures ripe fruit reaches the proper size.

"I am optimistic that growers will take a look at this," Duncan was quoted. "Because it is going to be difficult to compete against a country that can produce a product cheaper than we can.

Mechanical pre-thinning will not replace the hand thinning, but it can reduce the cost -- estimated at about $1,000 an acre -- by 25 to 30 percent.

"We've done lots of studies in California on mechanical and chemical fruit thinning or blossom thinning," Duncan said. "Generally what we see is the earlier you remove those fruit, the larger the remaining fruit are at harvest because there is less competition for nutrients from the mother tree."

In addition to finding efficiencies in their production practices, the cling-peach industry is asking Americans to buy the home-grown product.

"We need to educate consumers that they should be looking for peaches from the U.S.," Reedley farmer Harry Berberian told Rodriguez. "There are a lot of us who have been growing cling peaches for a long time. It's in our blood. And we are going to keep going as long as we can, but it is not going to be easy."

The online version of the Bee story generated many outraged comments from readers, including:

"We used to produce the best peaches in the world, how can we compete with these fellas from China? The folks from this country will work for a few cents a day, they don't complain about the job, and if they do, there's a heck of a lot of Chinese folks that will take their place."

"Who let that happen? We the people want our jobs back that the American government gave to China. It should be economic treason what Wall Street and the government have done!" 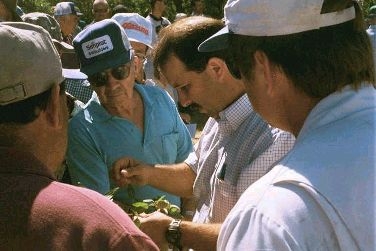