by Tim Hartz and Mark Bolda

During the 2010 production season we conducted a survey of approximately 30 commercial fields in the Watsonville-Salinas area to develop information on strawberry nutrient requirements, and to evaluate current fertilizer practices.  We did whole plant sampling in four fields, two planted with ‘Albion’ and two planted with a day-neutral proprietary variety.  In all fields the uptake of nitrogen was slow through the winter months; by the end of March total crop N uptake was less than 20 lb/acre.  From that point forward, crop N uptake was quite steady, averaging between about 1-1.2 lb N per acre per day.  By the end of August, total N uptake ranged between 140-190 lb N/acre, with the higher amounts in higher yield fields.  Total phosphorus (P) and potassium (K) uptake averaged about 40 and 230 lb/acre, respectively.

Soil sampling showed that the majority of fields began the season with high soil test levels of P and K, in many cases high enough that P and K fertilization would not be required to produce a good berry crop.  However, it appeared that growers often follow a preplant ‘recipe’ when it comes to fertilization, and that typical ‘strawberry mix’ controlled release N/P/K fertilizers were nearly always applied, regardless of soil test nutrient levels.  The efficiency of nitrogen applied preplant is also questionable.  The N in common preplant controlled release fertilizers becomes available at a relatively steady rate over 6-8 months, meaning that if applied in late October more than half the N is likely to be released by the end of March.  Since crop N uptake by the end of March is less than 20 lb/acre, any additional fertilizer N released by that time will be subject to leaching by rain or irrigation.  A moderate amount of preplant controlled release N provides a guarantee of some N availability during the winter, but a large fall application is likely to be inefficient.

Most of the growers we worked with provided us with their fertilization records.  On average, they applied a seasonal total of 187 lb N/acre, about evenly split between preplant and fertigated N.  However, there were large differences among growers in their N management; seasonal rates varied from less than 150 lb N/acre to nearly 300 lb N/acre, with some growers using nearly all preplant N, while others applied nearly all N through fertigation.  We found no correlation between seasonal N rate and fruit yield. 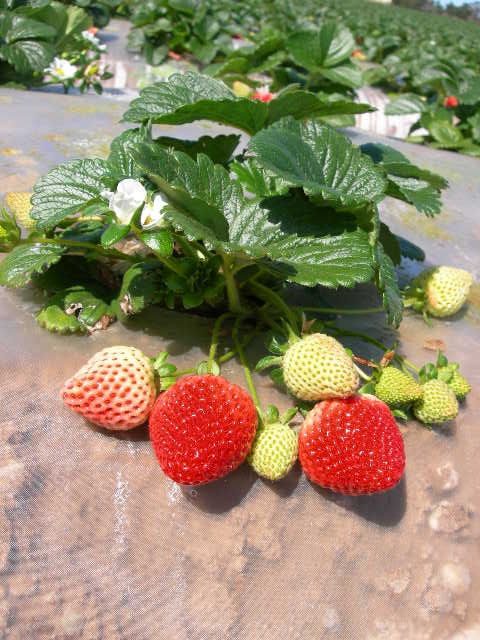