This is the most recent status report of theKuroshio Shot Hole Borer in the Tijuana River Valley of San Diego.  For the full report go to: https://trnerr.org/kshb/

The Ecology and Management of the Kuroshio Shot Hole Borer

in the Tijuana River Valley

This report presents the current status of the Kuroshio Shot Hole Borer (KSHB, Euwallacea kuroshio, Coleoptera: Scolytidae) in the Tijuana River Valley. It provides current rates of KSHB infestation; documents the current state of post-KSHB recovery in the most impacted forests in the valley; compares the current data with data collected over the past five years; and uses GIS technology for the first time to accurately map the spread of the KSHB in the valley.

1. The KSHB in the valley went through a rapid boom-and-bust cycle. Annual surveys of infestation rates in the field and annual calculations of canopy damage from satellite images show that the KSHB population went through a rapid outbreak and a rapid decline over a five-year period. The infestation rates peaked in Fall 2016 and the canopy damage was greatest between 2016 and 2017. The early increase in population was characterized by the KSHB's presence in the Wet Forests and the swift damage to these forests (see frontispiece). The later decrease in population was characterized by the KSHB's presence in the Dry Forests and the slower damage to those forests. The KSHB population decline appears to be due to the KSHB depleting their preferred host trees and not reinvading the recovering host trees in the Wet Forests. This boom-and-bust cycle occurred naturally, with no management interventions to control the spread or severity of the outbreak.

2. The willow forests that were extensively damaged by the KSHB are responding with vigorous regrowth. Since the KSHB heavily damaged the Wet Forests in 2015-17, there has been extensive willow forest recovery in three ways: by the survival of a few, scattered mature infested trees (‘Big Trees'); by the resprouting of mature KSHB-damaged trees (‘resprouts'); and by the seeding of new trees (‘seedlings'). The frontispiece shows the striking recovery of one of the Wet Forests. Some of the forests have recovered so much in just four years that they are now similar to their pre-KSHB stature.

3. The KSHB has not substantially reinfested the recovering willow forests. Even though others predicted that all of the trees in the recovering Wet Forests would be quickly reinfested, only 3% of the Big Trees, 2% of the resprouting trees, 1% of the young trees, and 0% of the seedlings were infested with KSHB in 2019. This unexpected result begs the question: Why are the recovering willows not being attacked by the KSHB? In this report we suggest three possible reasons.

4. The invasive plant, Arundo donax, is now a major problem. Willow trees are arundo's only competitors in the valley, and when the KSHB attacked and heavily damaged the willows it allowed arundo to flourish more than ever before. Our main recommendation for the park managers in the valley is to control the arundo on their property. To assist them we provide a map of the current distribution of arundo using satellite images and object-based imagery analysis (OBIA) software.

The research reported here is unique among KSHB studies. It involves detailed and long-term field surveys of the KSHB invasion in one valley, documents an entire boom-and-bust outbreak of the KSHB and describes the damage to and recovery of the forests. This report also discusses the six most important ecological findings and suggests that incorporating these findings into the existing predictive numerical model would make the model more accurate. Finally the report presents several recommendations for needed future research and for immediate management actions. 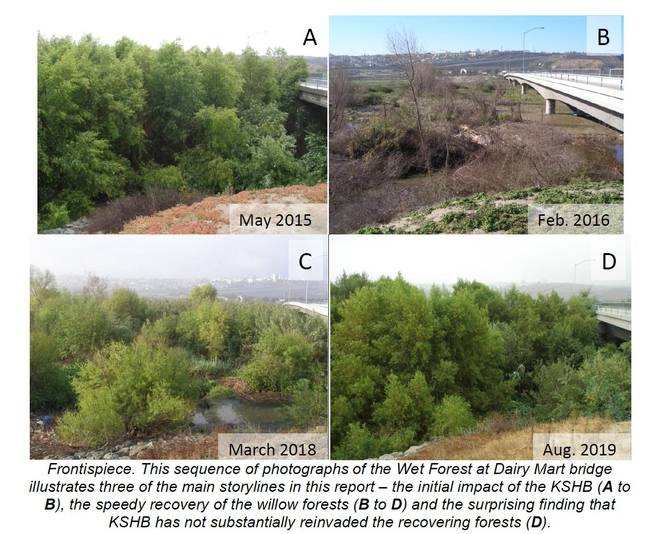