Fitting Lots of Tomatoes in a Small Space for Variety and Harvest
Published on: May 29, 2020

With tomatoes, I'm probably over-optimistic the same as I'm over-optimistic with about everything I try in the garden. It's hard not to be. A new generation of breeders has revived interest in forgotten heirloom varieties. Some have even bred new varieties that take up in shape, color, and flavor where older heirlooms left off. So this year when I started seeds from far too many packets, I've had to reckon with the bare dirt at my feet to think realistically about exactly how everything will fit.

Fortunately, spacing tomatoes is not a life-and-death decision. It's only May, early enough to see if my plan is working out but not too late to start over if it doesn't. There's also lots of good information out there about how close you can space tomatoes and still have healthy plants that give good yields.

What Research Says about Too Close Tomatoes

A lot of research has gone into understanding how close you can space tomato plants and still expect good yields. While there's no consensus on an exact distance, especially considering the number of varieties of tomatoes out there and their relative sprawl, there is consensus that each plant needs space enough for light, air, and nutrients to grow.

Higher density might not be out of the question, though. Researchers from Rutgers University write that staked tomatoes can be planted less than two feet apart within rows, with rows spaced more than three feet apart. A guide on dry-farming tomatoes from the Center for Agroecology and Sustainable Food Systems at UC Santa Cruz suggests that some growers space their plants closer than two feet for the purpose of improving the fruit's flavor. The stress of growing closer together is what they believe makes the tomatoes taste better.

Even closer than two-feet can work according to other studies. The government of Ontario posted a whole page summarizing published research on tomato plant spacing. In many of those studies, there was no real difference in yield, maturity, or fruit size when plants were spaced from one to three feet apart.

But across those studies, not all plants responded to different spacing in the same way. In many cases, there were no statistically significant differences in yield, maturity, or fruit size with in-row plant spacings ranging from 12" to 32" for tomatoes bred for processing.

“Not surprisingly, it tended to be the early, small-vined varieties that benefited most often from closer in-row spacing,” writes Janice LeBoeuf, a vegetable crop s for the Ontario Ministry of Agriculture, Food and Rural Affairs. “There were also a few cases in which higher populations advanced maturity or reduced fruit size slightly.”

That's what research says, sure, but no one I know has grown a single tomato in my own garden. If I want to pack them in and do it right, it helps to know a few things. The first of these is how tomatoes grow.

A tomato is a tomato is a tomato, right? No. I'm not talking about the tomato's variety in itself so much as how that variety will grow. For planting density, a tomato plant's growth habit makes a big difference in how many you can fit in a small space. Growth habits, either determinate or indeterminate should be marked clearly on the seed packet or seedling label. Otherwise, look up the variety by name online.

You can stake determinate tomatoes any way you'd like, but the most common approach is a cage the plants will quickly outgrow. These are sprawling plants that produce an abundance of suckers—those side shoots that emerge from the base of new leaves—that give you even more tomatoes.

Indeterminate tomatoes are the tall-growing kind, usually with large tomatoes. These are the ones you can tie to a tall stake every foot or two and watch as they snake up and up and up and never really stop climbing until the frost kills them.

With indeterminate tomato plants, you can manage their sprawl by pruning out its suckers. Be careful, though, that you don't pinch the flower cluster when you prune your tomato. You can tell the difference because the flower cluster doesn't emerge with leaves.

Last year I planted heirloom determinate and indeterminate tomato varieties anywhere I thought they might grow, anywhere they would fit. I didn't prune them. I tied them all to single stakes, which got fun when I tried to keep the determinate suckers from falling all over the ground with my fresh tomatoes.

My tomato strategy, or general lack of one, yielded about what you'd expect. I enjoyed by Blue and Gold berry tomatoes all summer when I could find them in the tangle of vines and leaves. I had no luck whatsoever with my Black Beauty indeterminate tomatoes. The plants got completely scorched in the Vacaville summer sun and produced not a single edible tomato.

This year, I decided, would be completely different. Where last year I scattered six tomato plants around the entire area, this year I decided to plant the bulk of them in just one space roughly 4' x 6'. In that space right now I have nine tomato plants, a tomatillo, a Pepino melon (tomato cousin, not a melon at all), plus marigolds and edamame bushes for good measure. Too much, right? Maybe, but as I write this I do have lots of tomatoes and tomatillos just a week or two from picking.

Staking and pruning have made all the difference. I planted my three indeterminate varieties between two tree stakes and have been managing them with the basketweave technique. That approach to staking has turned these sprawling shrubs into a wall of green that I can access easily from either side of the planting bed.

My two rows of indeterminate tomatoes are behind the determinates growing up stakes and tied every foot or so. I've been pruning out all the suckers to keep the plants tidy and increase air circulation, considering the density of my determinate varieties.

So far so good, but it's only May and I have already learned a few things so far. First, I probably won't get a whole lot from the middle row of indeterminate tomatoes. It turned out that the basket-weaved green wall is too dense to let light through. I also planted this middle row last, so these plants didn't get enough of a head start to stay above the wall. On next year's plot, on the other side of the garden to ensure healthy crop rotation, they might if they go in first.

I also learned that a Pepino melon bush needs a lot of direct sunlight. I planted mine beside a staked freebie indeterminate tomato that gave it too much shade, spindly though it was. I didn't get sentimental. I pulled that jank tomato out. Hopefully, my Pepino can catch up.

The nice thing about annual crops like tomatoes is that failure, even a big one, can be forgotten by winter when those seed catalogs start showing up again with varieties you didn't think could exist let alone grow in your modest garden plot. Even the failures can work out. Last year was a disaster for tomatoes, but I was grazing berry tomatoes all summer. The nice thing about a garden is that next year it can always be different. 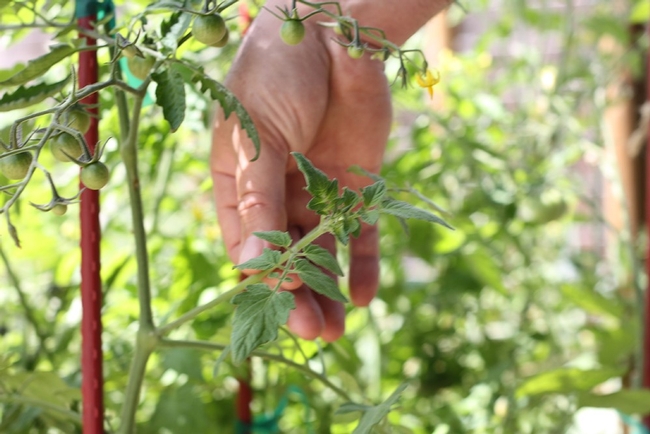 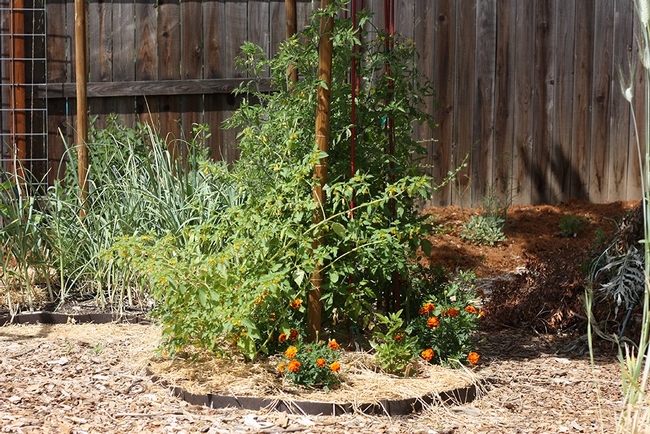 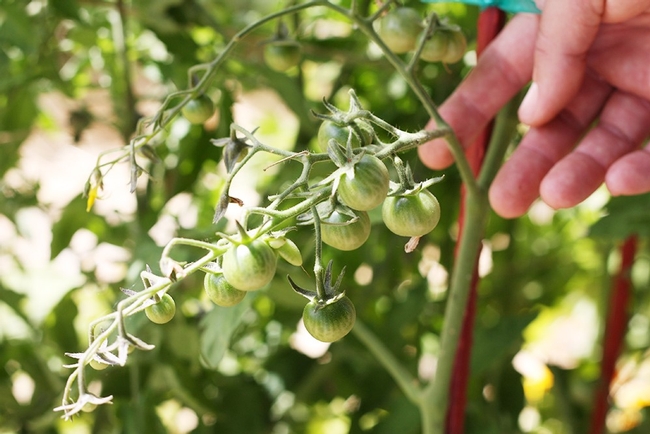 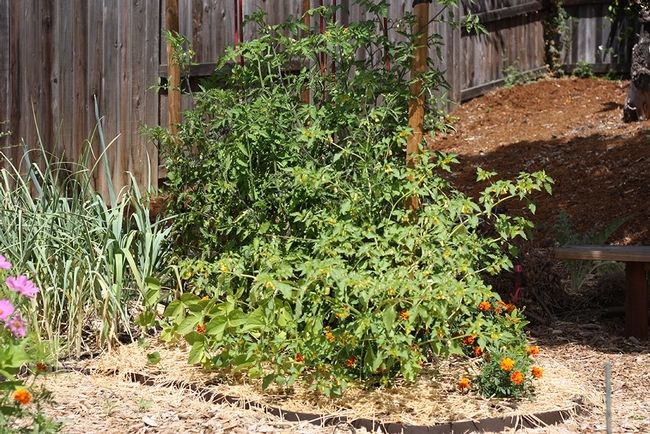 Would you please advise me how to start a small scale tomato farm on 1ha of land. I can erect a shade for the farm.
Best regards
Mulugeta
by jerry moss
on June 4, 2022 at 11:07 AM
I have just transplanted tomatoes from the seed bed to the garden space. The sun is out hot causing them to wilt bad, should i water while the sun is shinning hot
Leave a Reply:

Recent Posts
Ivy Headaches
July 1, 2022
The Gardens at The MET Cloisters
June 30, 2022
Time to Garden with Kids
June 29, 2022
Recent Comments
Barbara Hiebert: How do you get rid of them? I...
Robert F Fretwell: I have seen it a lot on hiking...
Alex Russell: Shonda, thank you so much for the...
Shonda Davis: Great article. I can relate to...
Top Tags
• plants • master gardeners • garden • flowers • Gardening • tomatoes • vegetables • succulents • fruit • pruning • blooms • Master Gardener • bees • seeds • tomato
/ RSS / Podcast