Gardening with Chickens
Published on: June 18, 2020

After moving to our house in Benicia 9 years ago, getting all the books on shelves, having the back yard landscaping re-done, and starting our various volunteer activities, we concluded that it was time to begin a new venture.  So we bought some newly-hatched chickens (Gallus gallus domesticus).  We thought of the many benefits:  free eggs, abundant fertilizer, and entertainment.  There was no thought of chicken dinners.

We enjoyed those benefits, and, since the chickens were to be given free range of the back yard, we assumed there would be control of various pests that could damage our vegetables.  When we released them from the brooder space (aka the garage), they quickly discovered our kitchen garden (Hortus domesticus ‘Julia Child').  This was seen by them as an endless buffet of goodies with all of the soft greens.  So, a fence was quickly in order.

While there are, indeed, many benefits of having chickens, there are some things to be kept in mind in making such a decision.  For example, chickens regularly take dust baths.  How do they do this? They locate the finest and loosest soil available and settle down, make a shallow depression, and proceed to fling dirt over themselves with their feet.  It's quite an enchanting sight—you almost want to bring them a glass of bubbly so they could fully enjoy their bath.  The problem is that they aren't very discriminating as to their location.  They generally ignore the dirt receptacle I built for their bathtub and select any number of places to do this—in the middle of the lawn (if a bare spot shows up), inside the wire cages used as a trellis support for tomatoes (Solanum lycopersicum) or underneath the rose (Rosa floribunda).  The location under the rose is particularly favored in the summer because of the drip irrigation.  Most plants are in danger, not from their eating habits, but from being displaced by their scratching to look for worms and bugs or to create their bathtub.

As for the fertilizer, that makes for a wonderful addition to the compost pit.  What they deposit around the yard is unquantifiable, but the amount placed on the patio is a couple of bucketfuls a year.  The unfortunate part is that they have learned from which door the treat-giver will exit, so they often cluster around that area, causing a cleanliness issue for the kitchen floor.

Chickens are sometimes thought of as an omnivore.  You know, they will eat anything, especially table scraps.  Not necessarily true.  Ours like kale (Brassica oleracea), but only certain lettuces (Lactuca sativa).  It is disappointing that ours do not have a taste for dandelion (Taraxicum officinale), for that is, unfortunately, abundant in our lawn.  On the other hand, we have a remarkably low invasion rate of slugs (Deroceras reticulatum) and other pests.

Chickens are truly entertaining.  If you get more than one breed, you can see personality differences, figure out which is the Alpha Chicken, and watch their continual grazing as they move across the landscape.  Some people have figured out how to train them to do tricks—about the only one ours can do is to jump up to get a treat held above their head.  I couldn't even train them to use the special swing I bought for them.

So, what is a gardener to do if chickens are desired and you want them to free-range?

*  Be prepared to accept some losses, particularly in the leafy greens group.

*  Accept that you will never win the Beautiful Backyard trophy 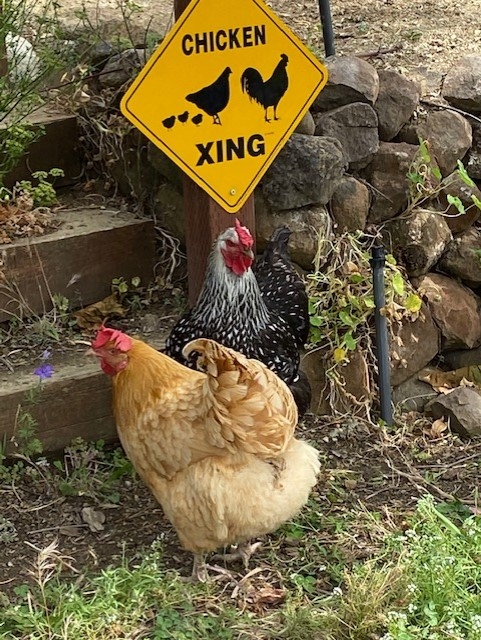 I would love to see how you’ve made your Quonset hut enclosures. One of my hens can break into anything. Have you tried planting a tree collard? They can eat the bottom part, and you can eat the top parts they can’t reach. Let me know if you want to try one. They propagate from stems very easily.
Leave a Reply: