The orange sulphur or alfalfa butterfly (Colias eurytheme). (Photo by Kathy Keatley Garvey)
If you think there's a butterfly invasion in the three-county area of Yolo, Solano and Sacramento, wait until you hear what Art Shapiro, distinguished professor evolution and ecology at the University of California, Davis, says about that.
"I am being inundated with inquiries about the sulphur (Colias eurytheme) outbreak in the valley--emails, phone calls, and especially being hailed on the street," says Shapiro, who has monitored butterfly populations in Central California since 1972 and maintains a research website.
The sulphur butterfly, also known as the orange sulphur or alfalfa butterfly, is yellow or white. In its larval stage, it is a major pest of alfalfa.
"We are beginning to come off what may be the biggest invasion in this region in 20 or 30 years," wrote Shapiro in an email today. "Such invasions occurred almost every year in the 1970s and 80s, decreased in the '90s and became rare since 2000. We do not know why. They appear to be triggered when the growers cut and bale alfalfa when adult populations are high, with outflow in all directions."
"There were significant but much less extensive outbreaks in late viii.2018 and end vii-early viii, 2019 and in the second half viii. 2016. Before that the outbreak of mid-ix, 2011 was the last one comparable to this. The current outbreak is regional, seemingly throughout Yolo, Solano and Sacramento counties at least and including urban areas. It seemingly peaked in the past two days and is now waning."
Shapiro says the "sex-ratio appears to be about 60 percent female, with 35 percent or so of the females white." They arrived "seemingly fresh but are now looking a bit peaked," he points out. They are laying eggs on clover in lawns, and on Spanish lotus and other legumes in the wildlands. "In the city of Davis. I counted about 1500 in just over two hours yesterday, with 20-30 per plant nectaring on bedding Lantana montevidensis in gardens and many visiting clover blossoms in mowed lawns."
"There is no reason to suspect a link to the fires or the smoke," the professor says. "In the past, such outbreaks in viii-early ix have been followed by a secondary, usually lesser, outbreak in late ix-x."
On his website, Shapiro describes the alfalfa butterfly as "one of commonest (in Central California), often reaching very high densities in alfalfa fields in midsummer to autumn."  When the alfalfa is cut, it "may emigrate en masse, even flooding into cities. This is also our most variable butterfly, seasonally and individually."

The eggs, laid singly, are red, and the larva are "basically green with a white-and-pink line on each side, but may have very variable black markings as well. The pupa is apple-green with rosy highlights."

Shapiro says that "Although it is a significant alfalfa pest, this butterfly overwinters as a larva almost entirely in annual vetch at low altitudes, and colonizes alfalfa only as the vetch senesces in May-June. Aside from alfalfa and annual vetches, it also breeds on a variety of clovers and sweet clovers and occasionally on lupines."

"There is no reason to suspect a link to the fires or the smoke. In the past such outbreaks in viii-early ix have been followed by a secondary, usually lesser, outbreak in late ix-x."
The UC Statewide Integrated Pest Management Program (UC IPM) says the butterflies "lay eggs on the new growth of alfalfa that is less than 6 inches tall. Eggs hatch into green caterpillars in 3 to 7 days. Full-grown caterpillars are about 1.5 inches long and are distinguished from other caterpillars on alfalfa by their velvety green bodies with white lines along their sides."

"Caterpillar populations usually result from a flight of butterflies into the field when the alfalfa is less than 6 inches tall," according to UC IPM. "Extremely large numbers of adults migrating between fields are often present from June to September in the Central Valley and from May to October in the southern desert. Factors contributing to economically significant caterpillar numbers are:

"There are four to seven generations per year of alfalfa caterpillar, and each generation is closely synchronized with the hay-cutting cycle so that the caterpillar pupates before cutting occurs." See more information on the UC IPM website.

San Francisco artist-lepidopterist Liam O'Brien shared his illustration of the alfalfa butterfly (below). It will be part of his first book for Heyday Press, scheduled to be published in 2024. "I'm painting all the butterflies of the Bay Area--a Herculean task that will take many years to do," he says. A self-taught lepidopterist, he works in "the areas of conservation where humans and Lepidoptera converge." O'Brien created the Green Hairstreak Project in the Outer Sunset District of San Francisco, Operation Checkerspot for the Presidio Trust, and works annually on the Endangered Mission Blue population in the Marin Headlands.  Bay Nature Magazine awarded him its 2014 Environmental Education Award. He writes and illustrates the monthly Flying Pansy column for BayNature.org. 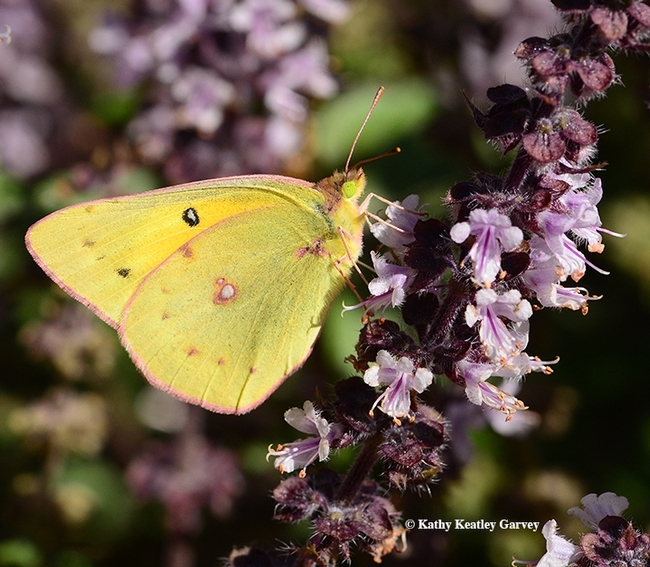 The sulphur or alfalfa butterfly, (Colias eurytheme) is widespread now in Solano, Yolo and Sacramento counties and is the biggest invasion in 20 or 30 years, says Art Shapiro, distinguished professor of evolution and ecology at UC Davis. (Photo by Kathy Keatley Garvey) 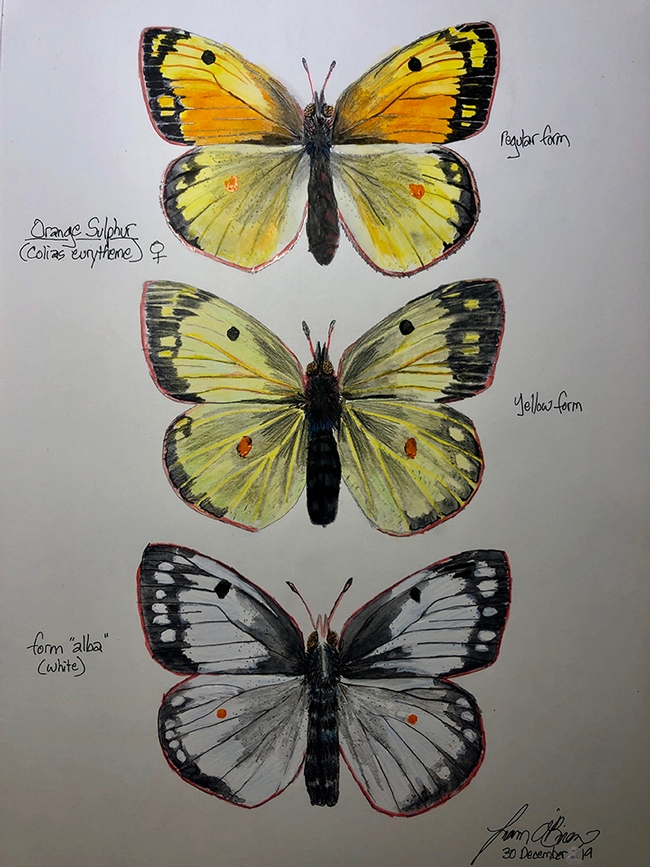