Farmers in the northern San Joaquin Valley saw a demonstration of new stonefruit thinning technology at a UC Cooperative Extension field day in Stanislaus County last week. Reporter John Holland and photographer Bart Ah You filed a story, photos and video about the event for publication in today's Modesto Bee.

The German-made "string thinner" has been researched for two years by farm advisors Roger Duncan and Maxwell Norton and pomology specialist Scott Johnson. It involves running a column of spinning plastic strings around and above the trees during bloom to knock off some of the blossoms.

The result is less fruit set and therefore reduced thinning expenses later in the season. In addition, the fruit that remain have less competition on the tree during their early development, which boosts fruit size at harvest.

"For one variety that was tested, the grower's gross income rose $997 per acre and the thinning cost dropped $386, resulting in a $1,383 (per acre) gain," Duncan explained at the field day.

The machine costs about $16,000, but it quickly pays for itself, said Modesto farmer Paul Van Konynenburg, Holland reported. 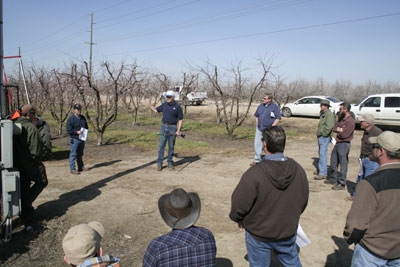