A USDA official was in Oakland yesterday to promote the development of renewable fuel infrastructure in the United States, according to a news release from Propel Fuels. The federal agency plans to fund the build-out of 10,000 renewable fuel pumps across the nation in the next five years.

A story produced by KGO-TV in San Francisco said high fuel prices came at a perfect time for Propel, whose biofuel business is booming.

"What we are trying to do is focus on fuels that are domestically made, and fuels that could contribute to American jobs and reduce our dependence on foreign oil," Propel executive Jim Iacoponi told KGO reporter Wayne Freedman.

Most American-made biofuel is produced with corn. Corn is high in starch, but low in sugars, making it less efficient for making fuel than foreign sugar cane. But high U.S. tariffs make corn a viable alternative.

In the news story, UC Berkeley physicist Richard Muller attributed some of the interest in corn to presidential politics.

"Well, it's Iowa," Muller said. "In order to win the Iowa caucuses go to Iowa and promise they will support corn ethanol."

At the news conference, Canales said corn will only be part of the solution.

In the U.S., there are more than 20 million vehicles (more than 1 million of those in California) capable of running on renewable fuels, but the majority do not have access to these fuels. Propel has plans to build 75 additional stations in the Bay Area and Sacramento, as well as in new markets later this year, the news release said. 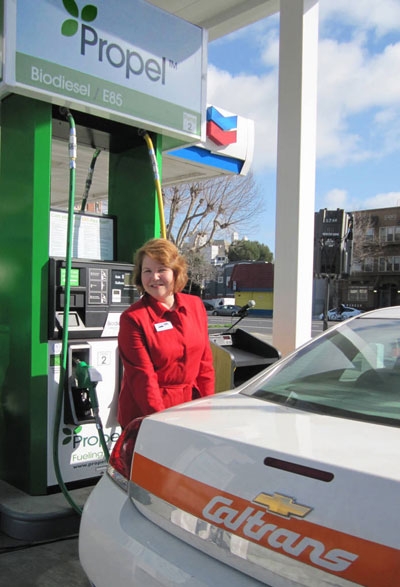