Wildfire Smoke Both Good and Bad for Plants?
Published on: October 27, 2020

Particulate matter in wildfire smoke can land on and coat the leaf surface of plants, reducing photosynthesis.  The particulate matter in the air can also clog the leaves stomata (the cell structures in the epidermis of the leaves that are involved in the exchange of carbon dioxide and water between plants and the atmosphere), thereby reducing gas exchange in the leaf.

But on the flip side, recent research conducted by Kyle S. Hemes, Joseph Verfaillie, and  Dennis D. Baldocchi reported in the January 2020 Journal of Geophysical Research: Biogeosciences indicates that wildfire smoke could increase plant productivity.  They studied the ecological effect of wildfire smoke in the Central Valley during the summer of 2018.  What they found was that the smoky skies only blocked about 4% of sunlight and that the smoke actually scattered the sunlight, allowing the light to reach beyond a plant's upper foliage to further into dense canopies.  The smoky skies increased the photosynthesis efficiency of the plant canopies, leading to productivity increases.  The complete article can be found at https://doi.org/10.1029/2019JG005380. 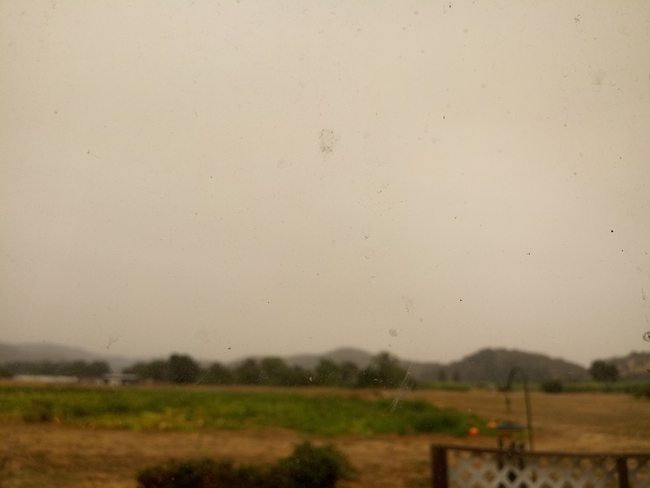 photo by Kathy Low
Comments: 1
Comments:
by Mitchell NewDelman
on October 28, 2020 at 4:03 AM
Interesting finding BUT what is the impact of toxic materials in objects incinerated in wild fires that went UP in smoke and came down as ash laden with heavy metals. Is there an eventual problem of such molecules entering the food chain or seeping into the water table. They cannot just disappear.
Leave a Reply: