Jill Oberski at a previous ESA competition then known as the Linnean Games. (ESA Photo)
“The first sighting of emerald ash borer in North America occurred in 2002, when it was discovered attacking ash trees in Ontario, Canada and what U.S. state?”

If you answered “Michigan,” as the UC Davis Entomology Team did, you're right.

Doctoral students Jill Oberski, Zachary Griebenow and Hannah Kahl of the UC Davis Department of Entomology and Nematology teamed to compete in the Entomological Society of America's Virtual Entomology Games, a college-bowl type of competition formerly known as the Linnaean Games. Zachary Griebenow at a previous ESA competition then known as the Linnean Games
“This  year's format was significantly different from the past since it was held virtually,” said Joe Rominiecki, manager of communications for the Entomological Society of America (ESA). “A  preliminary round was held in early November online via WikiQuiz, and then the finals, with 14 teams total, took place live, broadcast via Zoom, on Monday night, Nov. 16. But rather than a head-to-head competition as in the past, all 14 teams competed at once, answering the same questions--four rounds of 10 questions, plus a tiebreaker question.”

In this year's event, the games were divided into four rounds of 10 questions each. All teams competed to answer the same sets of questions. Each question was worth one point, with 40 being the best possible score. Hannah Kahl, a veteran of the ESA competitions
ESA did not record the Games this year, as the event itself “was mostly just a recitation of the questions, without the more lively 'buzzing in' format of the live event,” Rominiecki related.

Some of the questions the UC Davis team answered correctly (answers below): 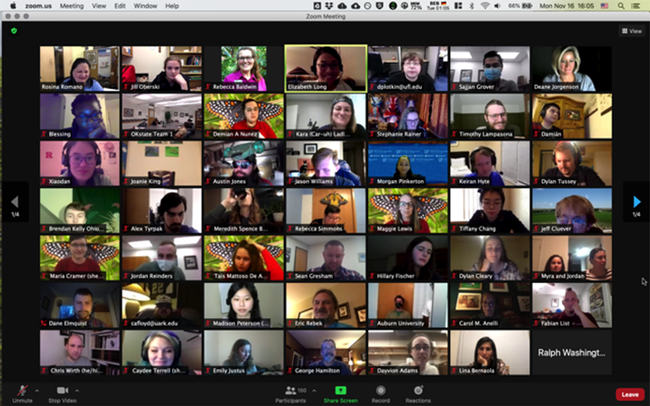