He's a mantis. A masked mantis.

And Santa Claus does not DRIVE a sleigh.

The jolly ol' gent RIDES a mantis. A masked mantis.

Take it from UC Davis Department of Entomology and Nematology faculty members Robert and Lynn Kimsey.

A masked mantis with Santa astride graces their front yard in Davis. The mantis? It's probably a Stagmomantis californica, native to the Western United States—and the Kimsey domicile.

Unfounded (and unfunded) scientific research indicates that passersby have laughed at the mantis, but it is not known whether anyone has ever called him names or banned him from playing reindeer games. A National Institutes of Health grant may determine that.

Rumor has it, though, that S. Claus--aka Kris Kringle or that Pudgy-North-Pole-Resident-Who-Never-Met-a-Cookie-He-Didn't-Like--did approach the red-nosed mantis and mumble something like “with your nose so bright, won't you guide my sleigh tonight?” Or maybe it was “Hey, buddy, can I hitch a ride?”

Of course, all the reindeer loved him and shouted out with glee that he would "go down in his-tor-ee." That's because  Dasher and Dancer and Prancer and Vixen and Comet and Cupid and Donner and Blitzen wanted to get out of work. Who wants to pull a sleigh that defies the maximum federal gross vehicle weight of 80,000 pounds?

But what, pray tell, will happen if the preying mantis gets...umm...hungry along the way?

Professor Lynn Kimsey, director of the Bohart Museum of Entomology and an authority on insects, and Robert Kimsey, who specializes in forensic entomology, caution that children should NOT leave milk and cookies (not even luscious chocolate chirp cookies made with crunchy crickets) on Christmas Eve as the red-nose mantis prefers live crickets, mealworms, bees, beetles, syrphid flies, grasshoppers, butterflies and caterpillars, thank you. 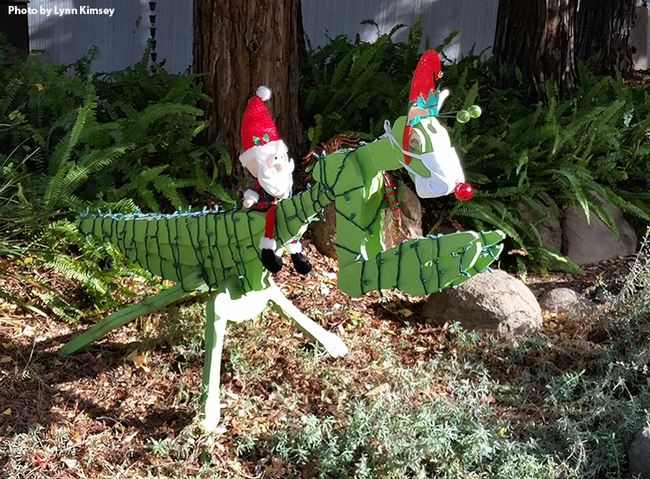 Giddy-up! Santa, being the jolly ol' gent he is, drives The Red-Nosed Mantis in front of the Davis home of entomologists Robert and Lynn Kimsey of the UC Davis Department of Entomology and Nematology. (Photo by Lynn Kimsey) 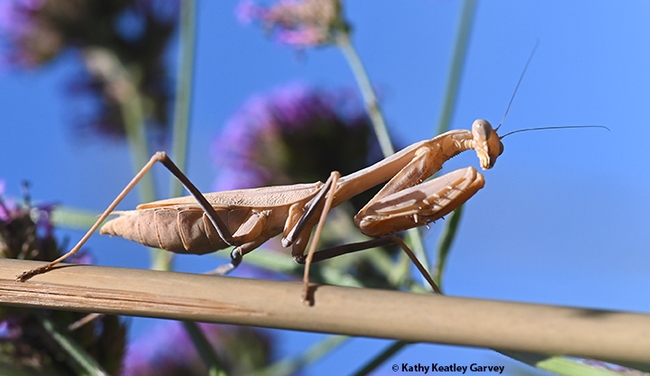