UCANR: Promoting economic prosperity in California
It Could Still be a Cold Winter
Published on: January 13, 2021

A moderate La Niña climate phase is expected through spring 2021. This indicates that slightly above average temperatures and slightly less rainfall than normal can be expected in California's avocado/lemon growing areas.

The fact that the winter weather pattern is expected to be warmer than usual doesn't rule out the possibility of a freeze. A freeze can occur any winter, regardless of the climate phase. And dry winters are often susceptible to sudden cold spells because of the lack of tempering effect of soil wet from winter rains

La Niña is one of three climate phases that are part of the El Niño Southern Oscillation (ENSO) climate pattern. Others are El Niño, during which colder and wetter conditions are expected in California, and neutral, when conditions are neither El Niño nor La Niña.

California's most severe freezes have occurred in weak La Niña, weak El Niño or neutral ENSO phases. Severe freezes in Decembers of 1990, 1998, 2001 and 2006 occurred after droughty years and years of low rainfall. In 2015, it snowed in Temecula and again in 2020 – in February!!! So cold weather is still waiting out there.

During a radiation freeze, cold air drains down and pools in low areas. Know the cold pockets in your grove, and keep that air flowing with a wind machine, if possible.

It's also a good idea to be ready for fires in years of low/no rainfall.

The 2021 Weather Forecast from Fox Weather provided by CAC is below: 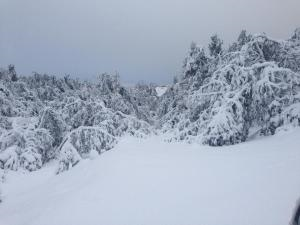 Public Value: UCANR: Promoting economic prosperity in California
Focus Area Tags: Agriculture
Tags: cold weather (2), damage (29), freeze (13), frost (24)
Comments: 1
Comments:
by Greg Alder
on January 14, 2021 at 10:17 AM
Thanks for the good reminder, Ben. Winter's not over until it's over. Doesn't matter if it's in the 80s today. I remember well that damaging cold in February last year!
Login to leave a comment.