Postdoctoral researcher Charlie Casey Nicholson
Robbin Thorp would have been proud of what happened on Thursday, Jan. 14.

When the UC Davis emeritus professor of entomology, a global authority on bumble bees, died June 7, 2019 at age 85, scientists found a way to memorialize him and what he loved.

The Bohart Museum of Entomology--where Thorp spend much of his time identifying bees, helping scientists, and encouraging guests at open houses to learn about the wonderful world of bees--decided to memorialize him with an annual Robbin Thorp Memorial First-Bumble-Bee-of-the-Year Contest.  The first person to photograph a bumble bee in 2021 in the two-county area of Yolo and Solano would win.

And it is only fitting that Charlie Casey Nicholson, who studied bees with Thorp, won. He photographed a black-tailed bumble bee, Bombus melanopygus, in a manzanita patch  at 3:10 p.m., Thursday, Jan. 14 in the UC Davis Arboretum and Public Garden to claim the honor.  The site is near Old Davis Road.

Due to inclement weather, bumble bees are not easy to find this time of year. Neither are they easy to photograph.

In fact, Nicholson noted this was his seventh observation field trip to look for the first bumble bee of the year. He had searched six previous times (three 10-minute observations on the manzanita on each of two other days, Jan.  6 and 7).

As the winner, Nicholson will receive a special Bohart bumble bee coffee cup and a face mask, said contest coordinator Lynn Kimsey, director of the Bohart Museum and a UC Davis professor of entomology. The first bumble bee of the year, a Bombus melanopygus, in flight, at the UC Davis Arboretum and Public Garden. (Photograph by Charlie Nicholson)
Nicholson, a researcher in the UC Davis Department of Entomology and Nematology labs of Professor Neal Williams, a pollination ecologist, and Extension apiculturist Elina Lastro Niño, is a 2015 alumnus of The Bee Course, where Robbin Thorp, a UC Davis distinguished professor of entomology, taught from 2002 through 2018.  The nine-day intensive workshop, geared for conservation biologists and pollination ecologists and considered the world's premiere native bee biology and taxonomic course, takes place annually in Portal, Ariz., at the Southwestern Research Station, part of the American Museum of Natural History, N.Y.

Robbin Thorp would have been proud of what happened on Thursday, Jan. 14. 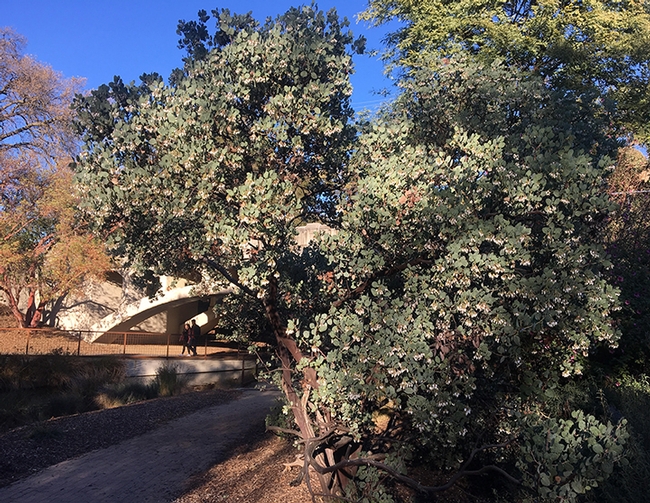 This manzanita plant at the UC Davis Arboretum and Public Garden, near Old Davis Road, is where UC Davis postdoctoral researcher Charlie Nicholson captured an image of the first bumble bee of the year. (Photo by Charlie Nicholson) 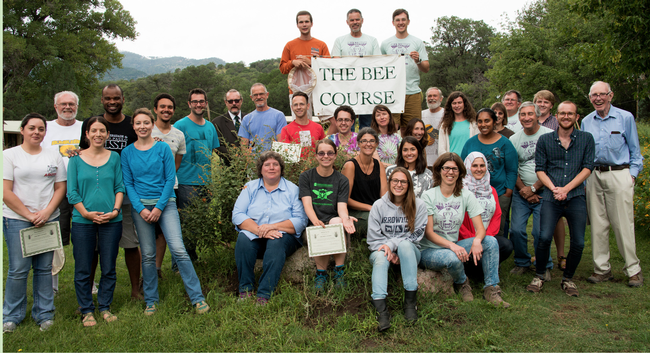 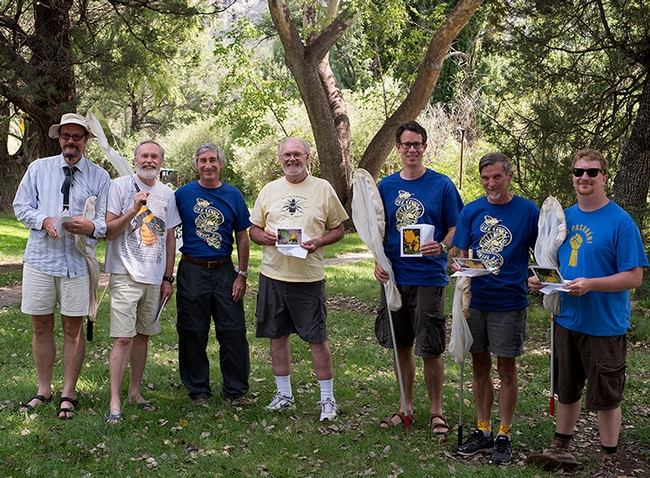