Bug Squad
sitenum=63
Happenings in the insect world
UCF Researcher: When a Fungal Parasite Turns an Ant Into a Zombie De Bekker, an assistant professor at UCF, will present a UC Davis Department of Entomology and Nematology virtual seminar at 4:10 p.m., Wednesday, Jan. 27. The title: "What Makes a Zombie Ant Tick? Connecting Genomes with Behavioral Phenomes in Ants Manipulated by a Fungal Parasite." Access this Google form link to join the seminar on Zoom.

"One of the most dramatic examples of the latter is that of the zombie ants. Here, a fungal parasite takes control of the behavior of a carpenter ant, guiding it up the vegetation where it latches on in a final death grip. Working across various disciplines within the broad field of biology we use this parasite-host interaction as a model system to ask the question how a microbe can control an animal's brain to change the behavioral output so precisely. In addition, we know very little about how behavior in general is regulated. Our research will therefore not only inform us about the mechanisms that these parasites use to manipulate their hosts, but ultimately also give an important insight into the regulation of behavior in general."

De Bekker holds a five-year $970,000 National Science Foundation grant to study "parasitic fungi that hijack behaviors of their hosts." A member of the UCF faculty since 2016, she received three degrees in biology from Utrecht University, The Netherlands: her bachelor's degree in 2004; her master's degree in 2006, and her doctorate in 2011. She specialized in molecular microbiology. She did postdoctoral research at the Center for Infectious Disease Dynamics, Department of Entomology, The Pennsylvania State University, from April 2011 to July 2012, and then served as a postdoctoral Marie Curie Fellow and Alexander von Humboldt Research Fellow at Ludwig-Maximilians University, Munich, Germany, before joining UCF. (See lab website)

Read some of her news media coverage:

Agricultural Extension specialist Ian Grettenberger of the UC Davis Department of Entomology and Nematology is coordinating the weekly seminars. He may be reached at imgrettenberger@ucdavis.edu.

(Editor's Note: The UC Davis Department of Entomology and Nematology's list of seminar speakers for the winter quarter is here. 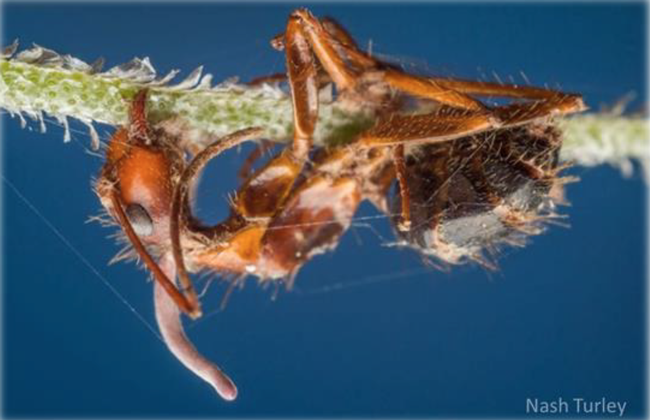