The third instar monarch caterpillar we found munching on the remnants of our cut-back milkweed on Jan. 23 in Vacaville, Calif., is now an adult butterfly fluttering around the neighborhood.

We brought the caterpillar in from the bitter cold and heavy rain and reared it in our Bohart Museum of Entomology  habitat. Did it like the kitchen? The coffee brewing, the dishes rattling, and NPR sharing information on the declining monarch population?

A strange new world, for sure. But there it was safe and sound. Well,  apparently sound.

We could see our little buddy's iconic orange wings through the transparent chrysalis.  We joked about having a gender revealing party. Male? Female?

Finally, on Feb. 24, a healthy male eclosed.  We don't usually name the monarchs we rear, but this one we named "Perseverance" after NASA's 2020 Perseverance rover looking for signs of life on Mars.

We released Perseverance on Feb. 25 on an abnormal spring-like day. For 10 minutes, he warmed his wings. Then he fluttered away as if he knew where he was going and what he was going to do when he got there. Monarchs are like that.

"Safe travels, Perseverance," we called after him.

In a previous Bug Squad blog, we likened our "winter monarch caterpillar find" to seeing the Easter Bunny delivering candy in December or Santa Claus handing out candy canes on Easter Sunday.

"Mama Monarch" must have laid the egg in late December, surmised butterfly guru Art Shapiro, UC Davis distinguished professor of evolution and ecology, who has researched butterfly population trends since 1972 and maintains a research website, Art's Butterfly World. "Evidence of inland winter breeding," he commented. "Nothing surprises me any more..." Indeed, he saw and recorded a monarch in Sacramento on Jan. 29, 2020.

In 2020, we collected more than 300 monarch eggs or caterpillars in our pollinator garden, primarily from two of the three milkweed species. We reared and released them or donated them to researchers at the University of California, Davis and the University of Nevada to start their own colonies.

The magical metamorphosis, the incredible transformation from egg to caterpillar to chrysalis to adult, never ceases to amaze. Neither does the Chuang Tzu philosophy:  "Just when the caterpillar thought the world was over, she became a butterfly."

Just when Perseverance thought the world was over, he became a butterfly.

Maybe he will meet up with that monarch was saw Feb. 23--23 miles away in Benicia. 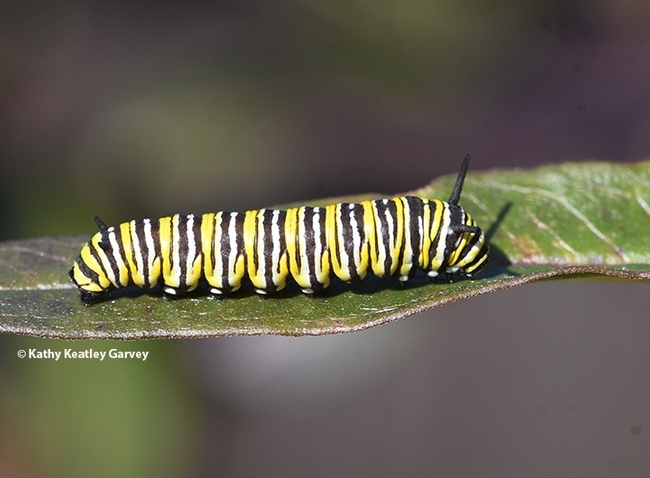 A winter monarch caterpillar munching on the remnants of milkweed on Jan. 23 in Vacaville, Calif. (Photo by Kathy Keatley Garvey) 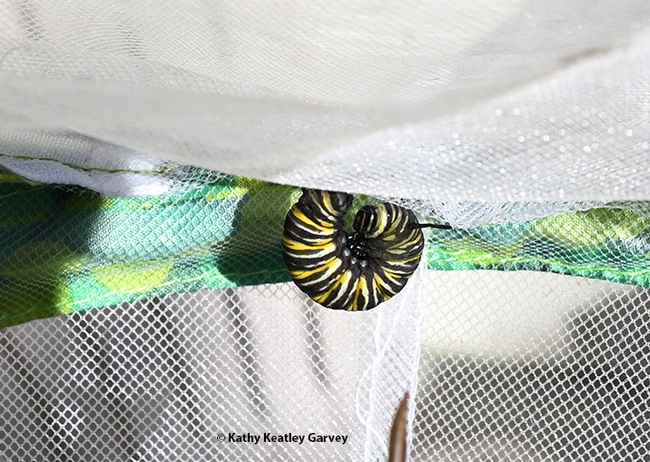 The caterpillar is about to "J" and pupate. (Photo by Kathy Keatley Garvey) 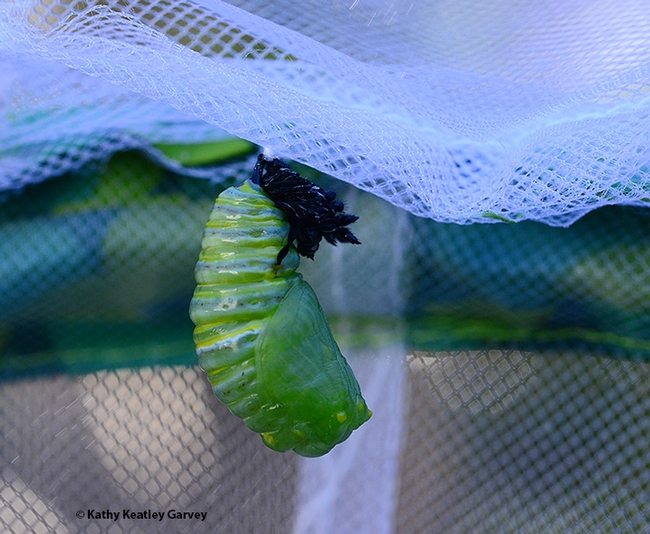 It's almost a chrysalis. (Photo by Kathy Keatley Garvey) 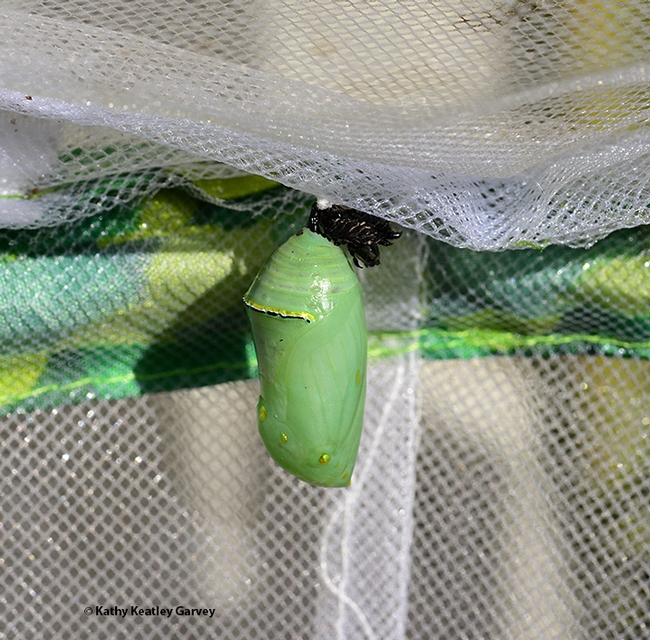 The formation of the chrysalis is complete. (Photo by Kathy Keatley Garvey) 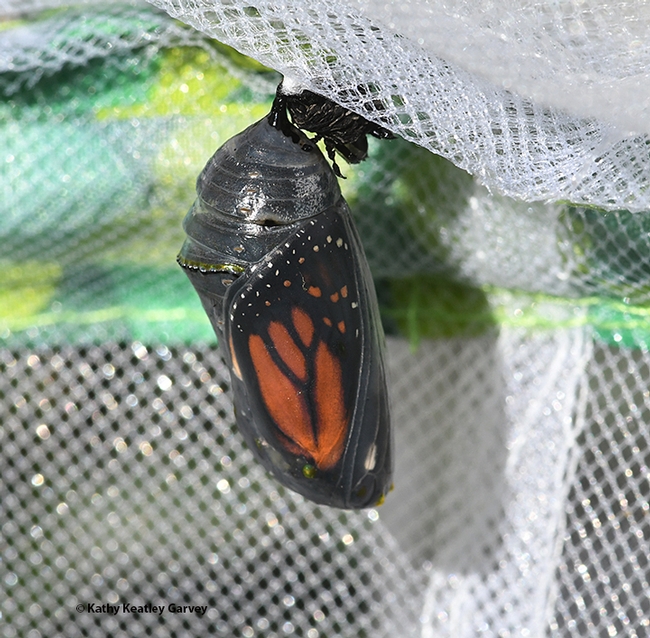 The iconic monarch wings are visible through the translucent chrysalis. (Photo by Kathy Keatley Garvey) 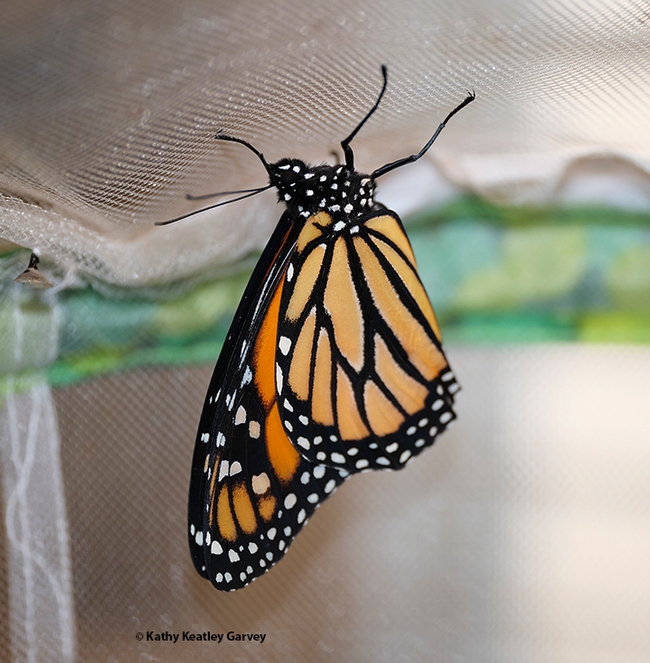 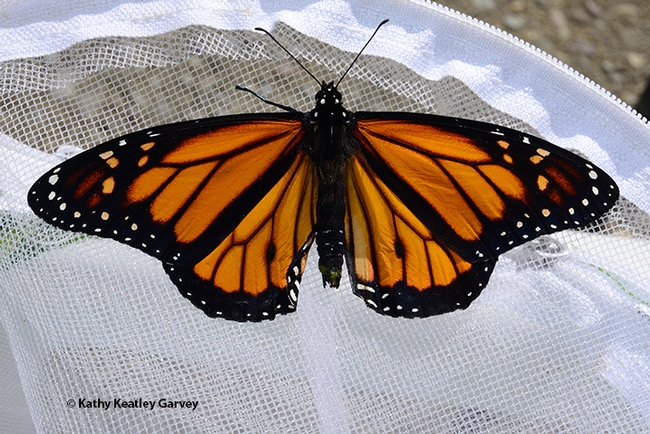 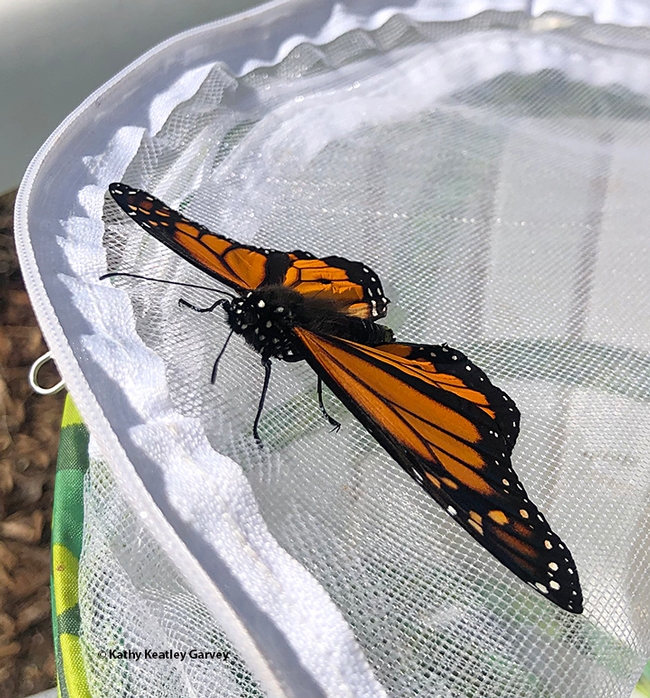 Ready to lift off! Shortly after this image was taken, the male monarch fluttered away. (Photo by Kathy Keatley Garvey)
Focus Area Tags: Environment, Natural Resources, Yard & Garden
Tags: Bohart Museum of Entomology (518), chrysalis (17), monarch caterpillar (7), Perseverance (1), winter monarch (1)
Comments: 2
Comments:
by Milli Wright
on March 2, 2021 at 7:24 AM
I released a female last week. I found her at the bottom of a 5 gallon white bucket standing in a quarter inch of rain water. I carefully lifted her and placed her on a plant in the sun. After an hour, she waved to me as she flew up to the magnolia tree -- hope she's well.
by Lynn [GB] Merrick
on March 2, 2021 at 2:43 PM
Fabulous photos!
Leave a Reply: