The second and final study of the past year by the UC Davis Olive Center focusing on the quality of "extra virgin" olive oil finds that most olive oil imported into the U.S. fails to meet the international criteria for "extra virgin," according to a news release published today in the Sacramento Business Journal.

The report comes on the heels of research results released last July that found 69 percent of the samples of imported olive oils labeled as "extra virgin" and sold in California supermarkets and big box retail stores failed to meet internationally accepted standards to be called "extra virgin" olive oil. The oils were deemed to be too old, poorly made and/or adulterated.

"This study is further proof that consumers are unknowingly buying mislabeled olive oil," the release quoted Patty Darragh, executive director of the California Olive Oil Council.  "The evidence continues to build that substandard foreign olive oil is being intentionally dumped in the U.S. to take advantage of the growing demand for olive oil among American consumers."

Both studies were initiated to investigate a number of confirmed reports that imported olive oils available for purchase in the United States labeled as "extra virgin" were actually lower quality oil. The California olive oil industry and many retailers have long been worried that consumers may be purchasing bottles labeled "extra virgin" but actually receiving something quite different.

"While there are many excellent imported and domestic olive oils available, our tests indicate that there are serious quality problems out there," said Dan Flynn, executive director of the Olive Center at UC Davis and a co-author of the new report. 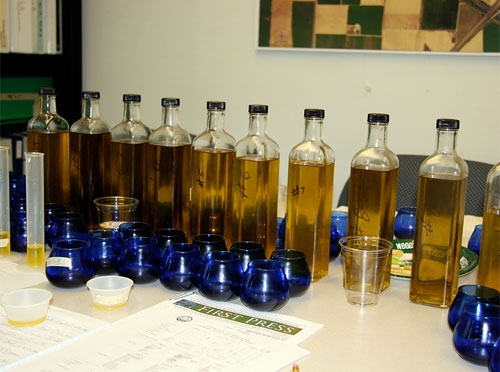