Shamrock Season is Here Again!
Published on: March 31, 2021
Yes, it's that time again where we can all be Irish for a day!

I was originally gathering information on another topic when Steve handed me the grocery ads from the mail.  Seems like everybody had shamrock plants for sale.  Of course, I had to go buy one and then got inspired to research shamrocks instead of what I was originally researching.

Turns out that I really didn't know much of anything about them besides some of the Irish folklore, and I really didn't know much of that either.  So I'll start there. Shamrock comes from the Irish word "Seamro'g" which means "little clover".  It represents the rebirth of spring.  The three leaves explain the Holy Trinity.  The 4th leaf (If any) symbolizes God's Grace.  Four-leaf clovers are considered lucky because the odds of finding one are about 1 in 10,000!  If you should be so very lucky as to find one, then giving it to another person is reputed to double the luck.  In ancient times they were thought to be magical or sacred.  They could enable the holder to see fairies, recognize witches and evil spirits, and enjoy protection from the "evil eye".  Eve was thought to have taken a 4 leaf clover with her when she was banished from the Garden of Eden.  Oxalis tetraphylla is known as the "Lucky Clover" because it naturally has 4 leaves that form a dark maroon eye in the middle.  It is native to Mexico.

There are actually two unrelated genera that are considered "Shamrocks", Oxalis and Trifolia.  Oxalis is also known as Wood Sorrel and there are over 500 species which are most numerous in the tropics.  Trifolia are generally clovers that have three leaves.  Both can be grown indoors or outdoors, in containers, or planted in the ground in hardiness zones 6 - 11.  Outdoor plants can be brought indoors during the harsher winters down to zone 3.  Both also have dormant periods, usually in the summer that can last up to three months for the green plants.  The purple ones usually are only dormant for about a month.  During this time, they like to be on the dry side in a cooler place.  Both have flowers in a variety of colors.

As both plants are members of the legume family, their roots have nitrogen-fixing bacteria thereby giving them value to the soil as a "green manure".  Bees and other pollinators are attracted to the flowers.  Right now, the "Yellow Bell" oxalis in the orchards can be heard to be alive with the humming of bees!  Many of the clovers grow in harmony with lawn grasses and are helpful because they crowd out broadleaf weeds, the most popular clovers being the "white clovers" Trifolium dubnium or repens.  This is because of their tolerance for being mowed.

PLEASE BE AWARE AND ACT / ADVISE ACCORDINGLY --- Oxalis is TOXIC to dogs, cats, rabbits, and horses, and probably other small pets as well as small children because it contains oxalic acid. 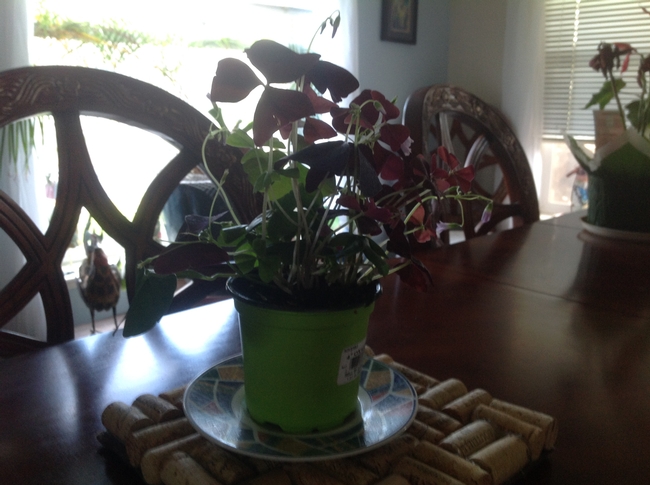 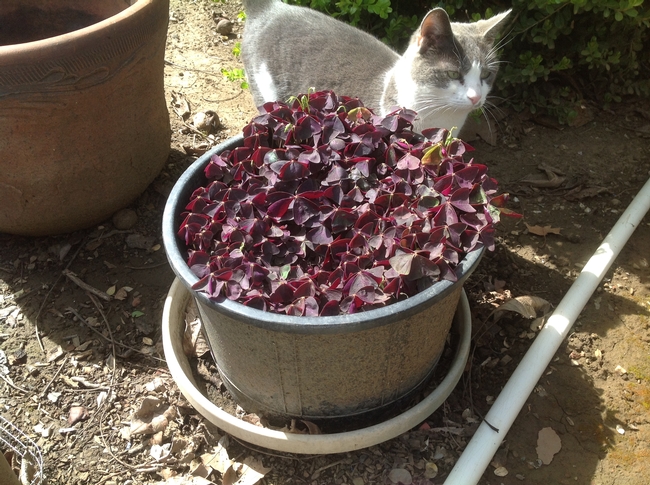