Entomology & Nematology News
sitenum=270
UC News about Entomology and Nematology.
Plants Keeping up with Climate Change Are Also Being Eaten More by Insects
Published on: April 8, 2021 Urban landscape entomologist Emily Meineke (Photo by Leon Godwin)
Many plant species are leafing out and flowering earlier in response to rising temperatures, and those that are not are “declining at alarming rates in some circumstances,” says urban landscape entomologist Emily Meineke of the UC Davis Department of Entomology and Nematology in newly published research in the journal Global Change Biology.

“However, the plants that are keeping up with climate change might also experience costs to earlier leaf-out,” said Meineke, lead author of the first-of-its-kind study, Phenological Sensitivity to Temperature Mediates Herbivory.

One of the costs is that “early” species get eaten more in warmer years. “This seems to be because when they leaf out earlier,” she said, “they also lengthen the amount of time herbivores have in a given year to eat their leaves.”

The publication is the result of a massive five-year research project involving herbarium specimens collected from the northeastern United States and France from 1900 to 2015.  These two areas have warmed more than the global average, Meineke said, and the plants studied are distributed widely across them.

Meineke, an assistant professor who joined the UC Davis faculty in March 2020, launched her research while a National Science Foundation postdoctoral fellow at the Harvard University Herbaria, where she studied how worldwide urbanization and climate change have affected plant-insect relationships over the past century. The blueberry, Vaccinium corymbosum, is a significant commercial food crop. (Photo by Kathy Keatley Garvey)
Co-authors are Charles Davis of the Harvard University Herbaria and Jonathan Davies of the Departments of  Botany, Forest and Conservation Sciences, University of British Columbia, Vancouver and the African Centre for DNA Barcoding, University of Johannesburg.

“This was a true collaboration,” Meineke said. “Each of us was interested in different pieces of the research. Davies and Davis brought the phenology hypotheses and expertise, and I brought an interest in/knowledge of herbivory and how it may change as the climate warms.”

The authors wrote that “both insect and plant development are sensitive to temperature, though the specific cues plants and associated insects use to time life history events may differ and include photoperiod, chilling, ‘forcing' and precipitation. For the vast majority of insect and plant species, the combined and relative contributions of these cues have not been well characterized.”

The specimens studied were selected first on the basis of the availability of previously published phenological sensitivity metrics: flowering sensitivity and leaf-out sensitivity. “We use the general term ‘phenological sensitivity' to refer to the extent to which a particular life event (e.g., for plants, budbreak, leaf-out, flowering, fruiting) responds to temperature from year to year (e.g. days change in phenology per ‘C' warming),” they explained.

The next step? “We are now beginning to look into whether and how herbivory might have shifted over time in California native plants,” Meineke said. “Our focal species so far is the valley oak, Quercus lobata, but we hope to eventually expand these observations to more taxa. We're also looking into other mechanisms that might drive herbivory shifts here in the west, where phenology is driven more by moisture than by temperature.”

A native of Greenville, N.C., Meineke holds a bachelor's degree from the University of North Carolina in environmental science, with a minor in biology, and a doctorate in entomology from North Carolina State University where she completed her dissertation,  "Understanding the Consequences of Urban Warming for Street Trees and Their Insect Pests.”

The project was supported by a Discovery Grant from the Natural Sciences and Engineering Research Council of Canada. The material is based upon work supported by the National Science Foundation Postdoctoral Research Fellowship in Biology in a grant awarded to Meineke.

Species interactions drive ecosystem processes and are a major focus of global change research. Among the most consequential interactions expected to shift with climate change are those between insect herbivores and plants, both of which are highly sensitive to temperature. Insect herbivores and their host plants display varying levels of synchrony that could be disrupted or enhanced by climate change, yet empirical data on changes in synchrony are lacking. Using evidence of herbivory on herbarium specimens collected from the northeastern United States and France from 1900 to 2015, we provide evidence that plant species with temperature‐sensitive phenologies experience higher levels of insect damage in warmer years, while less temperature‐sensitive, co‐occurring species do not. While herbivory might be mediated by interactions between warming and phenology through multiple pathways, we suggest that warming might lengthen growing seasons for phenologically sensitive plant species, exposing their leaves to herbivores for longer periods of time in warm years. We propose that elevated herbivory in warm years may represent a previously under appreciated cost to phenological tracking of climate change over longer timescales. 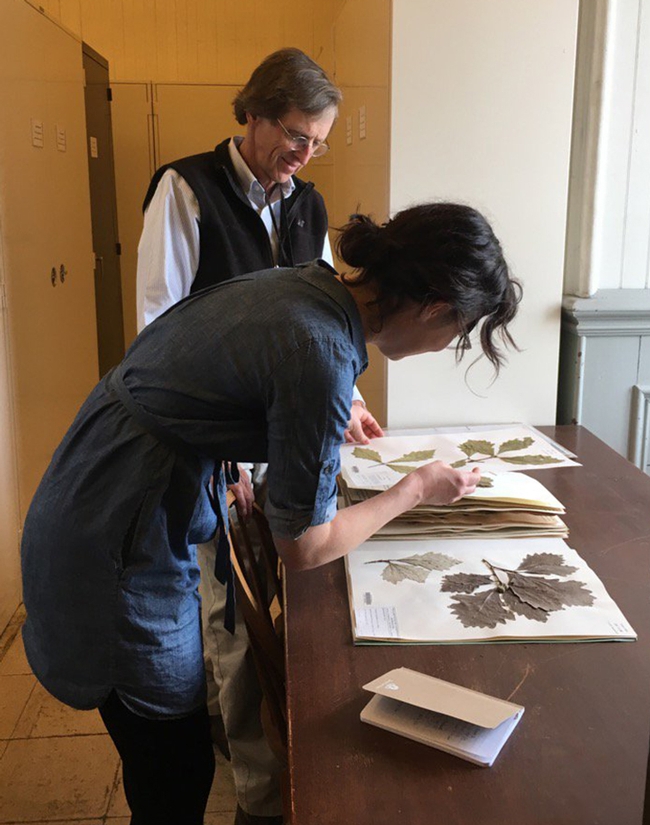 Urban landscape entomologist Emily Meinke working with Dave Barrington, director of the Pringle Herbarium at the University of Vermont. (Photo by Aimée Classen) 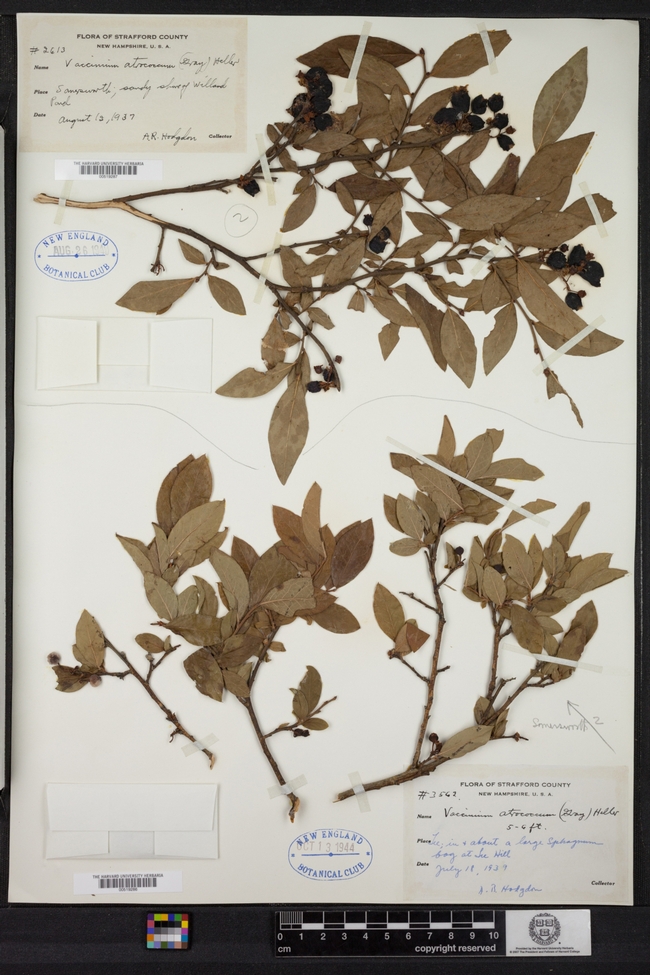 Two herbarium specimens of Vaccinium corymbosum, highbush blueberry collected in the 1930s and housed at the Harvard University Herbaria. Within the image, there are several instances of insect herbivore chewing damage that exemplifies the damage quantified in this study. Link: https://bit.ly/3t7FL5S 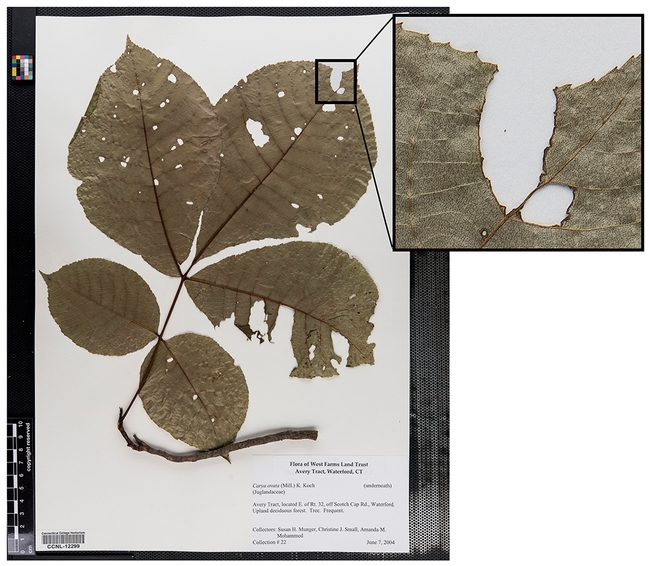