Rebecca Godwin, UC Davis doctoral alumnus, just published a comprehensive taxonomic revision of the New World members of the trapdoor spider genus, Ummidia.
Trapdoor spiders have long shared space with us, but few people are aware of their presence, behavior or biology, much less their taxonomy that can yield surprising results.

Not so taxonomist and arachnologist Rebecca Godwin, who holds a 2020 doctorate in entomology from the University of California, Davis and just published a comprehensive taxonomic revision of the New World members of the trapdoor spider genus, Ummidia.

In a nearly 10-year project that encompassed 800 specimens from 16 natural history museums throughout the world (including the Bohart Museum of Entomology at UC Davis), she updated the descriptions of the 20 known New World spiders, and described 33 new species.

“This study,  along with many others conducted utilizing museum collections,  is indicative of the importance of natural history collections and their usefulness in discovering unknown biodiversity,” said Godwin, who joined the faculty of Piedmont University, Demorest, Ga., last August as an assistant professor of biology.

“The revision was an undertaking,” Godwin said. “I first started working on it almost ten years ago, but it was really only scratching the surface of the stories these spiders have to tell.”

Importance of Taxonomy
"The Ummidia revision really highlights the importance of taxonomic work and typifies the large number of arthropod species that remain to be described, even in North America,” Bond said. “In many instances, taxonomic work alone stands between a species being lost to both extinction and obscurity, particularly in light of the current human driven wave of mass extinction. As such, one could argue that never before has the discipline been so important; it is impossible to ‘save,' conserve, and/or inventory undiscovered species.”

Godwin's “richly descriptive taxonomic monographs represent important, hypothesis-driven science,” Bond said. “Rebecca started her work with a collection of specimens and then postulated tests of what constituted the limits of a species; where in the hierarchy of life that species is placed; and what homologous characters support her hypotheses." Co-author Jason Bond, the Evert and Marion Schlinger Endowed Chair in Insect Systematics
One of the new specimens in the revision is Ummidia frankellerae, which Professor Bond discovered in Cayo, Belize on a 2019 UCBohart Museum Bioblitz. He named it for Bioblitz leader, UC Davis doctoral alumnus and Bohart associate Mary Frances "Fran" Keller, a professor at Folsom Lake College. Keller and Dave Wyatt, a biology professor at Sacramento City College (and Keller's first entomology undergraduate instructor) led the tour.


At the onset of the UC Davis research, the number of described species in the genus, plus one subspecies, totaled 27. Of that initial number, 20 were considered New World species or in the Western hemisphere (the Americas.) The distribution ranged from North America and South America to Asia, Northern Africa and Europe.

“I am continually blown away by how little we know about what is out there living on this planet with us,” Godwin commented. “I think that anytime we can learn more about the organisms we share this planet with, it's a valuable endeavor. Most people don't even realize they are sharing their space with these spiders, literally right under their feet—not to mention the fact that these spiders tend to have very limited ranges and have very low dispersal.  They can be winked out of existence without our ever knowing they were here, and I find that kind of heartbreaking.”

“Additionally, I think Ummidia is a fascinating group for evolutionary and population dynamic studies,” Godwin said. “Within a single genus there are the ‘traditional' extremely non-vagile species sympatric with species that appear to have mastered ballooning, potentially giving them much greater dispersal capabilities.”

Godwin said that “there are incredibly small species living alongside relatively quite large species. Is this dwarfism? Paedomorphism? Are there potentially sneaker males at work? We know so little about the actual life history and behavior of these spiders and how it might be varying from species to species.”

“Ummidia is a wide-ranging genus, found in the southwestern Mediterranean, Central Asia, and in the Americas from as far north as Ohio and Maryland west to Arizona and south to Brazil, including the Greater and Lesser Antilles,” they wrote.

Ballooning, a behavior that distinguishes some Ummidia, “facilitates the dispersal of individuals over geographic features that would otherwise serve as barriers to gene flow,” they noted.

“Although species of Ummidia are very widespread and occur in a number of habitats, they tend to be very patchy in their distribution,” they wrote. “This, paired with the highly cryptic nature of their burrows, make them very difficult to collect, and so by necessity this revision is based almost entirely on historic rather than newly collected material. Much of this material was amassed from a number of collectors and institutions by the late Dr. Willis Gertsch, who spent over 40 years working on a revision of the group. Gertsch never published his work on Ummidia prior to his passing in 1999, but his notes and correspondence, stored in the archives of the American Museum of Natural History proved useful and insightful in the completion of this work.”

Godwin, citing the difficulty of revising the morphologically homogenous group, quoted Gertsch in one of his writings:  “This is the most difficult ctenizid genus I know with such feeble, variable, erratic, aberrant characters that I find myself uncertain as to...what is a species.”

At Piedmont University, Godwin teaches a number of biology classes, including introductory biology and invertebrate zoology. Her main research interests include the phylogenetics, taxonomy, and systematics of trapdoor spiders.

She is also keenly interested in science communication. “I have a true passion for effectively communicating science both with students in the classroom as well as with the public,” she said. “I believe that effective science communication at all levels and societal science literacy are crucial to create an informed society.” 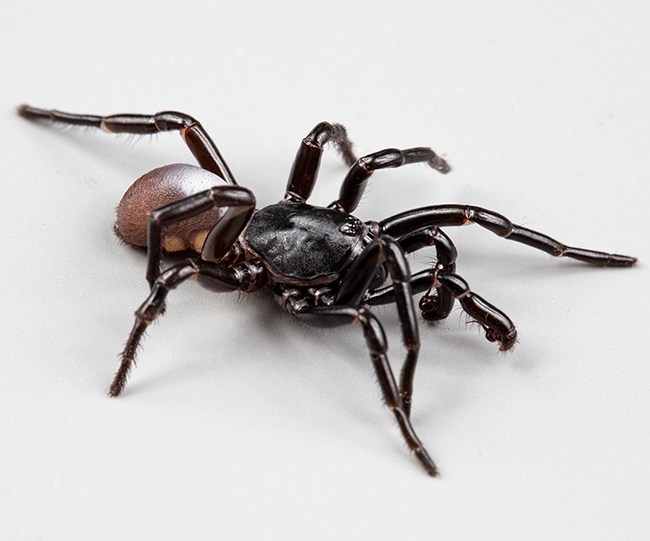 A male Ummidia rongodwini (named for the husband of researcher Rebecca Godwin). It's found in the southeast, and this one is likely from the Carolinas. (Photo by Jason Bond) 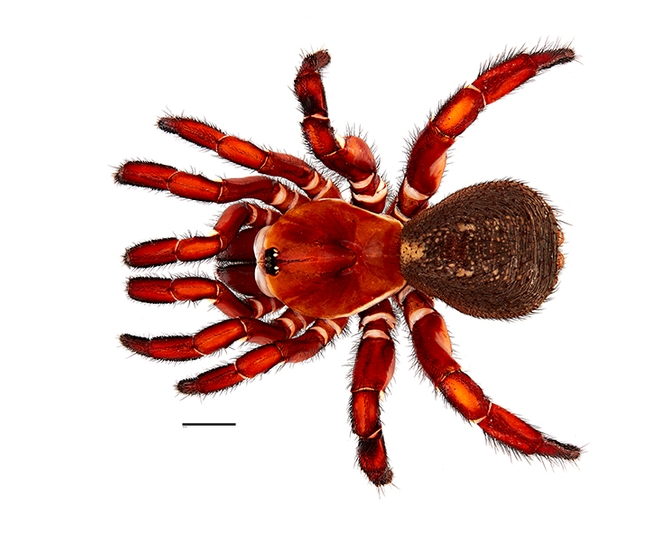