Yellow Starthistle is a plant of Old-World origin that arrived in California in the mid 1800's. It is believed that it made its way to California in contaminated alfalfa seed from Europe. It is one of California's worst noxious weeds, infesting parks, rangelands, pastures, hay fields, orchards, vineyards, canal banks, roadsides, and other disturbed areas. Since its introduction, yellow starthistle has spread steadily and now infests nearly 15 million acres throughout the state. Disturbances created by cultivation, poorly timed mowing, road building and maintenance, or overgrazing favor this rapid colonizer. It forms dense infestations and rapidly depletes soil moisture, thus preventing the establishment of desirable species. The spiny flower heads deter many grazers, and its toxins are poisonous to horses, causing a nervous disorder called “chewing disease”, which is fatal once symptoms develop. Horses are the only animal known to be affected in this manner and should not be allowed to graze on yellow starthistle. 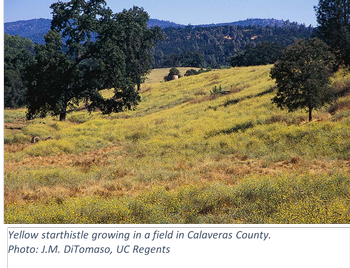 Over the years, several control strategies have been developed for combating yellow starthistle including well-timed mowing, grazing with livestock (excluding horses), hand pulling, burning, cultivation, and the use of herbicides. All of these can be highly effective but are often implemented on a scale that does not equate to the severity of the population statewide. Because yellow starthistle is a prolific seed producer and the seeds can remain viable in the soil for several years, populations continue to spread when left unchecked. To have an impact on these larger infestations, often we look to biological control. Biological control involves using living organisms, such as insects, mites, or fungi, to reduce weed populations. In nature, many plants are controlled biologically in their native host range by organisms that feed on them. However, since yellow starthistle is not native to California, no biological control agents were present on its arrival. Yellow starthistle was first targeted for biological control in the 1960s.  Since that time, six species of insects that attack the flower heads to reduce seed production have been introduced. These agents were found in the native host range of yellow starthistle, from Turkey and Greece throughout much of Europe and the Mediterranean basin. These insects were brought to the United States after they underwent years of research and testing and were officially permitted. It is imperative that anything approved for release be as host specific as possible without causing harm to other nontarget species. Host specificity testing focuses especially on plants closely related to the weed target. In the case of yellow starthistle, which is in the sunflower family, testing included commodities such as artichokes, sunflower, and safflower, as well as native species including thistles. The first agent introduced, the gall fly, Urophora jaculata, never established. The hairy weevil (Eustenopus villosus) and the flower weevil (Larinus curtus) are generally the most abundant agents, followed by the gall fly (Urophora sirunaseva), bud weevil (Bangasternus orientalis) and peacock fly (Chaetorellia australis). The false peacock fly (Chaetorellia succinea) was accidentally introduced in 1991, but subsequent studies indicate that it does not pose a risk to safflower or other plants native to California. A rust pathogen, Puccinia jacea var. solstitialis, was permitted and introduced to California, but it did not establish well. All these insects work by attacking the flower head where they lay their eggs, hatch, and then feed on the developing seeds, ultimately reducing seed production. Although the flower head insects sometimes attack very high proportions of flower heads, yellow starthistle is a very prolific seed producer with an individual plant producing as much as 100,000 seeds! Even if the insects reduce seed production by 50%, that still leaves a lot of seeds. 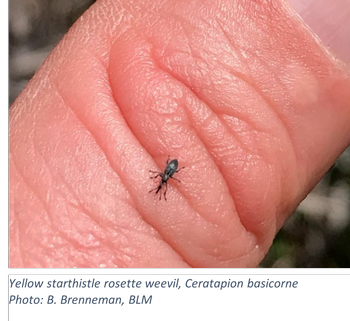 Knowing this, researchers have been on the hunt to add a new insect to the arsenal of biological control. Preferably an insect that attacks at a different region of the plant.  Introducing the yellow starthistle rosette weevil, Ceratapion basicorne. The rosette weevil is native to the Mediterranean Region, occurring from Spain to Azerbaijan and was first collected as a prospective agent of yellow starthistle in a survey of Turkey in 1984. Since 2001, Dr. Lincoln Smith, Research Entomologist with the United States Department of Agriculture, Agricultural Research Service has been studying the insect at his research laboratory in Albany, California. After nearly two decades of research, the insect was permitted for release in California on October 2019 by the USDA Animal Plant Health Inspection Service (APHIS), permit no. P526P-19-04298. According to Dr. Smith, “this insect poses no risk of injuring other nontarget plant species except bachelor's button (Centaurea cyanus). Adults emerge from hibernation in early spring, larvae develop inside the rosette roots during spring, adults emerge in June, and then they spend the rest of the year hiding. There is only one generation per year, so populations will grow slowly, which will gradually reduce yellow starthistle populations. Successful biological control is expected to reduce, but not completely eliminate the weed." 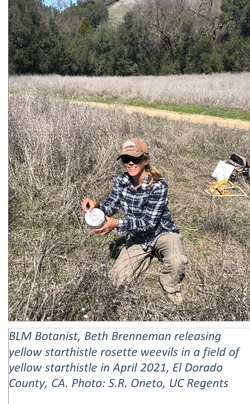 The new warrior insect was first released in April 2020 in Solano County, CA. This was the first release of Ceratapion basicorne in North America. A second release, overseen by Dr. Smith was made in El Dorado County in April 2021 in collaboration with the Bureau of Land Management working alongside regional BLM botanist, Beth Brenneman, BLM Biological Control Specialist, Joseph Milan, and University of California Cooperative Extension Farm Advisor, Scott Oneto. Now that the insect has been released, researchers with USDA, Bureau of Land Management, and University of California Cooperative Extension will be monitoring the site intensively over the next several years to determine the rate of reproduction and efficacy at feeding on yellow starthistle.

For more information about the weevil or if you have questions, contact the local University of California Cooperative Extension office or http://cecentralsierra.ucanr.edu

Public Value: UCANR: Protecting California's natural resources
Focus Area Tags: Agriculture, Environment, Natural Resources, Pest Management
Comments: 2
Comments:
by Juan Medrano
on May 5, 2021 at 4:14 PM
How do you grow and propagare the star thistle rosette weevil?
Please help me understand the life cycle: adults emerge from hibernation in early spring (April), at this time do they mate and lay eggs on the rosette roots and larva developed in the rosette roots? Then larvae pupate and adults emerge in June. Where do adults go in hiding and hibernation? Are adults eating at this time as they develop?
Thanks, this is fascinating and would like to understand it better.
by Scott Oneto
on May 14, 2021 at 4:56 PM
Thanks for the question Juan. The yellow starthistle adults emerge from hibernation in the early spring and feed on yellow starthistle leaves. Females lay eggs in the leaves of rosettes from late March to early May in central Italy and we are expecting to see a similar timing in much of California. Eggs hatch in about 10 days at room temperature, and first instar larvae mine in the leaf blade and down the petiole. Larvae feed primarily in the root crown (upper part of root stem), complete development in about two months, and pupate inside the plant. Adults emerge in June, feed on yellow starthistle leaves for a few days then disappear. They are thought to aestivate (become dormant during the summer or dry season) and hibernate (overwinter in a dormant state) in secluded places, and adults have been found under tree bark in July. Newly emerged females are in a state of reproductive dormancy, and although they mate, they are not able to lay eggs until completion of hibernation. In
the spring, after feeding for 1–2 weeks, females lay a few eggs per day for 1–2 months before dying.

In terms of propagating the weevil, we hope that the weevils that are currently being released will reproduce and over the course of a few years these sites will be used as a nursery where insects can be collected and moved to new locations.
Leave a Reply: