Plum leaf curl is a malady indicated by tightly curled and deformed leaves which are usually near the ends of new plum shoots in the spring. Unlike leaf curl in peaches and nectarines, which is caused by a fungus, leaf curl in plums is caused by an infestation of the leaf curl plum aphid, Brachycaudus helichrysi. This insect sucks tree fluids from plum leaves, causing them to curl.  Colonies of these aphids will mass inside the curled leaves on which they are feeding. Damage caused by plum leaf curl aphid, Jack Kelly Clark, UC IPM
The leaf curl plum aphid is shiny and can vary in color from yellowish green to brownish yellow.  While doing their damage, they secrete large amounts of honeydew, which can attract ants and encourage the growth of sooty mold fungus on the leaves as well. Although this mold is unsightly, it does not harm plum leaves directly.  However, it can interfere with photosynthesis by partially blocking the sunlight that reaches the leaves.  Heavy infestations of aphids can also slow tree growth, reduce fruit size and reduce fruit sugar content.

The leaf curl plum aphid overwinters as eggs deposited near the base of buds. In spring, the eggs hatch and the aphid population builds rapidly on newly opened leaves. In May, the aphids migrate from their plum tree host to summer host plants in the daisy family (Asteraceae).  In the fall, leaf curl plum aphids return to plum trees to lay their eggs and the cycle begins again. Plum leaf curl aphid, Jack Kelly Clark, UC IPM
There are several natural enemies of the leaf curl plum aphid. These include lady beetles, green lacewings, brown lacewings and soldier beetles. Although these insect predators can often lead to natural control of aphid populations, any damage that the aphids have already caused cannot be undone. Curled leaves will remain curled and fruit size may still be reduced after the aphids are suppressed. If leaf curl plum aphids are a chronic problem, two treatments of horticultural oil just as buds are swelling can be effective. Hard blasts of water can remove the aphids from trees if this is done early in the growing season before they have been able to shelter inside curled leaves. Additionally, limiting the amount of nitrogen fertilizer applied to the plum tree leads to less new shoot tip growth, thus depriving the aphids of their favorite plant parts. Pyrethrins or insecticidal soap can kill aphids during the growing season, but are usually ineffective because the aphids are protected inside their curled-leaf home.  Whenever a pesticide is used it is important to read and follow all label instructions and to consider its impact on natural enemies and pollinators such as honey bees.  Treatment of trees later in the summer will have no impact on the aphids because they will not be present; they have moved on to their summer host plants. The Master Gardeners Spring 2021 Workshop Series has begun.  Topics include:  Plant Propagation, Native Gardens, Invasive Plants, Honeybees, and a 4-part series on Firewise Landscaping. Visit our website to read about these upcoming free workshops and to register for them. 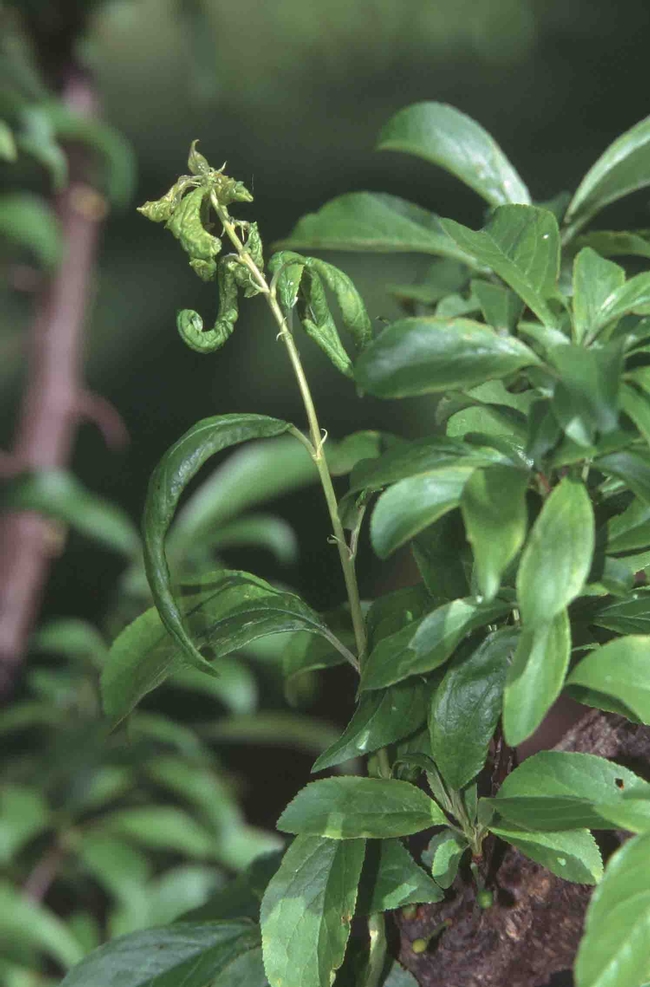