Scientists say that within several weeks, trillions of cicadas from Brood X will emerge in 15 eastern-central states of our  nation, from Georgia to New York.

These periodical circadas have spent the last 17 years underground feeding and growing, and growing and feeding and  soon they will tunnel out and emerge together in what some call a "synchronous emergence."

Scientists will be delighted. The cicadas will call for mates; the squeamish will recoil at the numbers and sounds; and predators will eat their fill.

"Nearly 3,400 species of cicadas exist worldwide," according to a May 10th article in Scientific American. "But periodical cicadas that emerge en masse once every 17 or 13 years are unique to the eastern U.S. The 17-year cicadas live in the North, and the 13-year cicadas are found in the South and the Mississippi Valley. The three species of 17-year cicadas—Magicicada septendecim, M. cassinii and M. septendecula—form mixed-species cohorts called broods whose members arise like clockwork on the same schedule. The broods are identified by Roman numerals. Brood X is the largest of the 12 broods of 17-year cicadas, which emerge in different years."

Nature photographer Allan Jones of Davis says he expects "to hear quite a bit about cicadas emerging back East soon."

"I do not see cicadas often around here, but one flew by me several years ago in the Ruth Risdon Storer Garden (UC Davis Arboretum and Public Garden) and lit in the Ranger Sage." That was on June 7, 2011.

Community ecologist Louie Yang, associate professor, UC Davis Department of Entomology and Nematology (he goes by the name of "cicadachaser" on Twitter), commented: "I don't know the western cicadas well, but that appears to be Okanagana arboraria."

Yang recently (April 29) presented a seminar to Georgetown University's Biology Department on his research on cicada emergence as a resource pulse in local ecosystems.

The Bohart Museum of Entomology at UC Davis (temporarily closed due to the COVID-19 pandemic) has scores of cicada specimens, according to director Lynn Kimsey, UC Davis distinguished professor of entomology.

I have one. My mother, who grew up on a West Texas ranch,  left one in her estate. She tucked it into a little box labeled "Texas bug." No one knows when or where she found it, but it measures two-and-a-half inches long and an inch wide.

What we do know is that the cicada is considered one of the world's loudest insects. "The chirping and clicking noises of the male cicada are actually a species-specific mating call that can be heard by females up to a mile (1.6 kilometers) away," according to LiveScience in its piece on "Why Do Cicacas Sing."

"But with one estimate putting the number of cicadas at 1 billion per square mile, it's easy to understand why East Coasters might find this cicada serenade anything but romantic," LiveScience related.  "Male cicadas produce their calls by rapidly vibrating a white, drumlike plate, or tymbal, located on either side of their abdomens. A chorus of lovesick cicadas can reach volumes greater than 100 decibels, which is louder than a lawnmower at full bore. Luckily for anyone needing a good night's sleep, these bugs usually cease their racket by sundown."
Check out the circada map published in the Entomological Society of America's Entomology Today.  Entomologist John Cooley of the University of Connecticut researches periodical circadas and urges folks to take photos of the arrival of Brood X.  "Brood X includes all three of the 17-year-cycle species--Magicicada septendecim, M. cassini, and M. septendecula—that arise together every 17th spring to congregate on trees throughout much of the eastern-central United States," writes entomologist-writer Leslie Mertz of Michigan in Entomology Today.

Wish we were there... 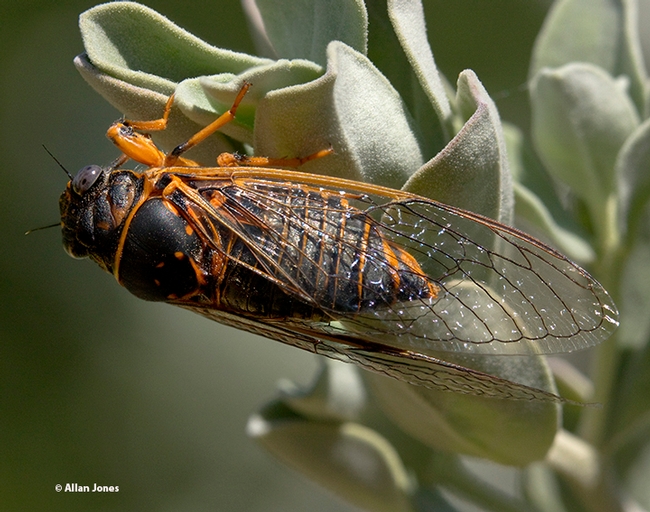 Photographer Allan Jones found this cicada in the Ruth Risdon Storer Garden of the UC Davis Arboretum and Public Garden several years ago. It appears to be a Okanagana arboraria, according to Louie Yang of the UC Davis Department of Entomology and Nematology faculty. (Photo by Allan Jones)
Focus Area Tags: Environment, Innovation, Natural Resources
Tags: Allan Jones (19), Brood X (2), cicadas (2), Louie Yang (18), UC Davis Arboretum and Public Garden (22), UC Davis Department of Entomology and Nematology (580)
Comments: 2
Comments:
by Gail
on May 12, 2021 at 8:50 AM
I've never experienced an emergence of cicadas, and would really like to go East to see and hear this one. Any tips about where and when to go (I'm in the SF Bay Area). My dream is to go with someone who knows about this marvel, but I don't know of any such person. Like a "Cicada Emergence Tour."
by Kathy Keatley Garvey
on May 12, 2021 at 4:57 PM
You might contact the Entomological Society of America at esa@entsoc.org
Leave a Reply: