California farmers will have to pay millions of dollars to Mexican authorities to export their products to the neighboring country if a trucking dispute is not resolved before summer, according to an article in La Opinión. Mexico plans to impose the new tariff in retaliation for the cancellation of a U.S. pilot program that permitted Mexican trucks to transport goods on U.S. highways.

The Border Trade Alliance reported this week that California agriculture will be the second most impacted economic sector if the two countries do not reach an agreement in relation to the free passage of Mexican trucks in U.S. territory, the article said.

"The retaliatory tariffs that Mexico has imposed on U.S. goods in response to the trucking impasse are hurting the U.S. economy and are a drag on President Obama's goal to double exports," BTA president Nelson Balido said in a statement released by the organization. "As Texas A&M University's Center for North American Studies recently reported, the U.S. agriculture sector alone has been negatively affected by the tariffs to the tune of $153 billion."

La Opinión reporter Claudia Nuñez spoke to the director of the UC Agricultural Issues Center, Dan Sumner, about the potential economic impact of the trade dispute.

"California exports about 20 percent if its agricultural production, principally to Mexico," he was quoted in the article. 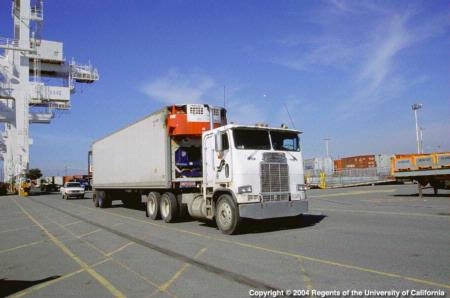 U.S. and Mexican governments are involved in a a cross-border trucking dispute that could hurt both countries.
Tags: Dan Sumner (32), economy (20), Mexico (1), trade (11)
Comments: 0
No Comments Posted.
Leave a Reply: