Dan Sumner a part of NY Times animal cruelty debate
Published on: May 13, 2011

New laws were proposed this spring in Iowa, Minnesota and Florida that would make it a crime to take undercover videos or photos at industrial farms, a tactic often used to show mistreatment of animals and unsanitary conditions, the New York Times reported.

In response to this development, the Times invited nine experts to debate issues related to farm animal welfare. The director of the UC Agricultural Issues Center, Dan Sumner, took part in the discussion, noting that in addition to legal and moral questions, there are economic issues worth considering.

In his essay, titled Economics in the Hen House, Sumner outlined Proposition 2, a law voters approved in 2008 that ends the use of conventional cages in California egg production by 2015. Sumner said the new law will ban eggs that 95 percent of buyers now choose - less expensive, conventionally produced eggs - and allow only more expensive "free range chicken" eggs, which are already available, but rejected by the vast majority of shoppers.

He believes the use of graphic images in the campaign detracted from an informed policy debate about the potential impacts of Proposition 2. Emotional appeals with ugly images can sway a public debate, he said, while noting that farmers also use their own favored images to garner support for farm policy.

"A picture may be worth a thousand words, but sometimes a few numbers and some evidence may be worth even more," Sumner concluded. 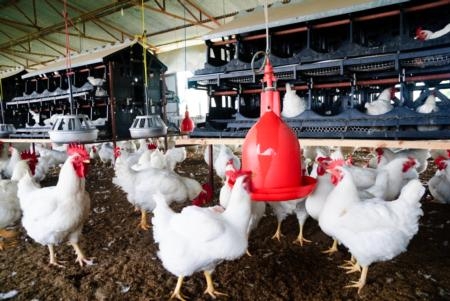 Curious, since the original prompt was about taking images on farms: Where is this photo from?
by Jeannette E. Warnert
on May 13, 2011 at 11:35 AM
The photo is from iStock Photos. It's one of the shots that Communications Services bought and posted in the repository for our use. This hen house looks like a resort, doesn't it!
Leave a Reply: