I don't know how many of you take the Daily Republic, but my mom and I still do.  In a Friday issue before Mothers' Day, there was an article about a newer variety of Monarda that looked like lacy flowers.  My mom called me and went on and on about how exotic and beautiful it is and how perfectly it would go in her yard.  I read the article and looked it up online since it's easier to get her something she is raving about than trying to figure out a gift.  Well, pretty much every place that said they had it in stock had not updated their site.  Even Morningsun Herb Farm had a very depleted stock.  So, I did what every good daughter should do, I passed it off to my sister since she lives close to Annie's.  She was successful in finding Monarda, but not the lacy-looking variety. And since she is a good sister, she got one for me also.  Both are red colors, but neither has bloomed yet, so I can't comment on which one will be prettier.  So, I'll say it will be mine.

Now I have this plant that I know very little about and have to figure out where to put it in not one, but two, yards.  What's a girl to do???  Research, of course.  Here's what I found out...

Monarda didyma is also known as Bee Balm, Oswego tea, and Bergamot.  It is a member of the Lamiaceae family.  While it is native to the eastern area of North America, it does very well in California gardens according to The Western Garden Book, and grows well in our zone.  The US Forest Service site was interesting to me in that it gave explanations of how the plant got its different names.  Bee balm is the common name that came from the herbal use of the resin for healing and soothing bee stings.  The name Oswego tea came from the early white settlers to North America who were taught by the Oswego tribe of Native Americans (in the area that is now Northern New York) the way to make herbal tea from the leaves.  The name Bergamot came from the similarity in fragrance to the bergamot orange.  Monarda is in recognition of Nicolas Monarda, a Spanish physician and botanist who authored the information which introduced the North American herbal plants to Europe.  Didyma is the Latin word meaning "in pairs" or "twins" because the stamens occur in pairs.

Along with the USFS site, the Missouri Botanical Garden site gave the most concise description and care information.  The plants vary in height from 1 foot to about 5 feet.  Monarda is a clumping plant that spreads by rhizomes from the edges to about 1 1/2 feet in diameter.  It also spreads by seed from the flower head after it ripens and turns brown.  One can either break it open and spread the seeds or allow it to open on its own and self-sow.  It can spread very widely in that manner.  The flowers are unique and stunning.  They range in color from scarlet to deep lavender.  There were also pictures of spotted and white flowers on the Wikipedia site.  They are grouped in dense heads on the ends of the stems and sometimes at the lower stem axils.  The flowers are tube-like structures with two lips, the lower being slightly larger and can be up to two inches long.  They bloom from late June to late August and bloom more when the spent flowers are removed. The stems are four-sided to square looking with the leaves on opposite sides of each other.  There are little spreading hairs on the underside of the leaves. (I need to go outside and look at the leaves again!)

Monarda like to be in full sun to light shade in very hot areas.  They like rich, humusy, moisture-retaining soil and will also do well in clay soil.  They don't like the soil to dry out completely and are more prone to rust or fungus when that happens.  If they get very crowded, they need more aeration to prevent fungus and powdery mildew.  Monarda is easily propagated by dividing every three to four years in the autumn or spring.

Monarda attracts hummingbirds and butterflies and also other beneficials.  The other good thing is that deer and rabbits tend to avoid them.  When I visited the Boyce-Thompson Arboretum with my friend just south of Phoenix, there was a beautiful, big plant (which I didn't think to take a picture of while telling my friend what little I knew) that was well attended by the hummingbirds in the area.  By big, I mean about 4 feet tall and easily 4 feet long in the garden with bright red flowers.  I'm looking forward to seeing what my little plant does, and also to getting mom's planted and more purchased for her yard (as requested after she scrolled through the pictures on my phone). 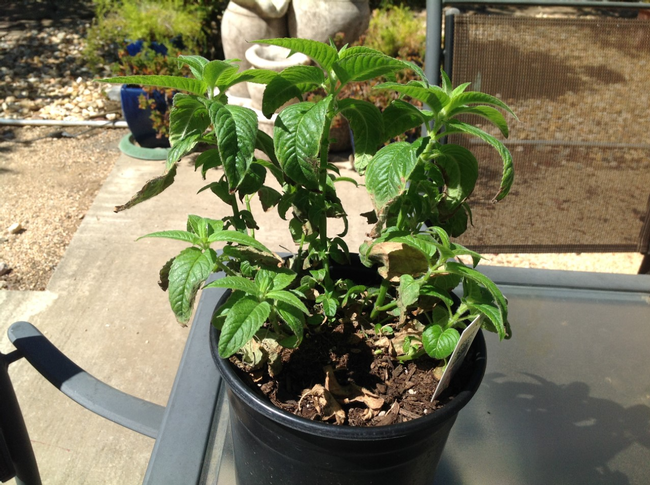