Bug Squad
sitenum=63
Happenings in the insect world
If Cinderella Were a Moth...

If Cinderella were a moth, what species would she be? Maybe this tiny, shimmering one.

When we spotted this visitor during National Moth Week on a Mexican sunflower, Tithonia rotundifola, in our pollinator garden, we asked our Bohart Museum of Entomology associates for identification.

How did the raisin moth get its name? Most likely because it was first identified on Muscat raisins in Fresno County in 1928, according to Wikipedia.  It's a pest in its larval stage, feeding on such dried fruits as raisins and dates. "The larvae in particular are herbivorous and prefer to feed on dry fruits on the ground or still on the plant. In particular they feed on fallen figs, ripe carob pods, grapes, cottonseed cake, cacao beans, prunes, peaches, apricots, pears, and more." This species is found throughout much of the world, including California, Florida, the Eastern Mediterranean region, and some parts of Australia, South America, and Africa.

Remember the Cinderella story? After her father died, Cinderella lived with her cruel stepmother, Lady Tremaine, and two evil stepsisters, Anastasia and Drizella, who forced her to work as their maid.  When Cinderella received Prince Charming's ball invitation, she wanted to wear her deceased mother's party dress but her jealous stepsisters destroyed it. Like magic, her Fairy Godmother appeared and gifted her with a a silver shimmering gown and tiny glass slippers. Bottom line, Cinderella loses a slipper at the ball, when the Fairy Godmother's magic vanishes. Prince Charming learns it belongs to Cinderella, and they marry and live happily ever after.

Not sure if this moth lived happily ever after, but poof, it vanished shortly after I took this image. 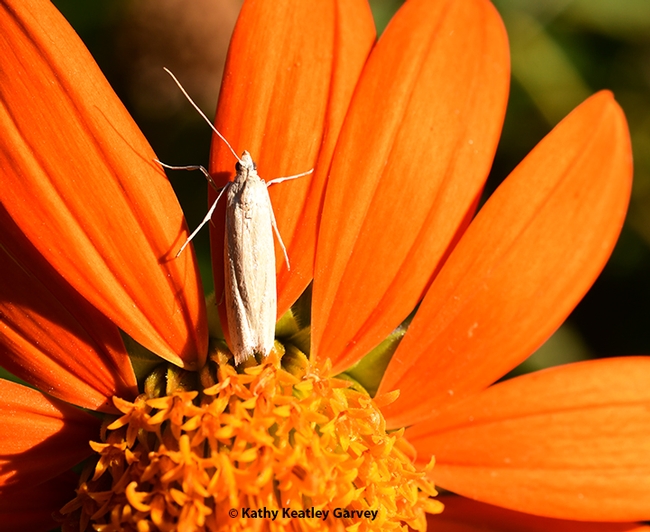