The United Nations General Assembly designated 2021 as the International Year of Fruits and Vegetables. This issue of Down on the Farm takes a look at one of ARS's major contributions to fruit production: citrus rootstocks.

Remember that old commercial that declared, "A day without orange juice is like a day without sunshine"? Thanks to the Agricultural Research Service (ARS), consumers can enjoy "citrus sunshine" whenever they like. Begun by USDA more than a century ago, the citrus research program has helped to ensure a bounty of not only oranges, but also grapefruits, mandarins, lemons, and more.

But that bounty was severely threatened in 2005 with the appearance of a new and destructive disease. Citrus greening, or huanglongbing (HLB), has caused Florida citrus production to plummet around 70 percent in the 15 years since the disease hit U.S. citrus groves. HLB, which causes low yields, yellowed leaves, and bitter-tasting fruit, is caused by a bacterium, Candidatus Liberibacter asiaticus. So far, there is no cure.

Like other crops, citrus crops are susceptible to a variety of diseases and pests. One reliable way to fend off those threats is to graft the fruit-producing part of a tree (the scion) to the lower trunk and root system (the rootstock) of a different tree that has been bred to resist the disease or pest. Rootstocks are also used to obtain specific tree sizes, yields, and fruit quality, among other goals.

A 6-year-old Owari Satsuma Mandarin tree on US-942 rootstock developed by ARS. In this trial, US-942 was the highest yielding rootstock, averaging more than 300 pounds of fruit per tree. (Photo by Jake Price, University of Georgia, D4632-1)

With ARS's long history of helping growers keep their groves healthy and productive, the agency had the expertise required when HLB appeared. To quickly address the problem, the ARS citrus breeding project was refocused in 2005 partly to develop new, HLB-tolerant, highly productive citrus rootstocks.

Led by Kim Bowman, a plant geneticist in the ARS Subtropical Insects and Horticulture Research Unit in Fort Pierce, FL, the team released 12 new HLB-tolerant citrus rootstocks between 2007 and 2018. Before and after the releases, Bowman conducted dozens of field trials to evaluate and validate the rootstocks' performance, providing the scientific data needed to demonstrate their potential and gain industry acceptance. These rootstocks, all with the prefix “US,” have since become a key component in the survival of the Florida citrus industry.

Not surprisingly, demand for the rootstocks was extremely high, and growers also needed assurances that they'd be getting the real deal. Bowman arranged for the plant material to be certified disease-free by the Florida Department of Agriculture, paving the way for the rootstocks to be commercially propagated on a large scale.

Bowman and his colleagues have also done a great deal of research on rootstock propagation. Even though most common citrus rootstocks can be grown uniformly from seeds, it takes several years for a young tree to produce a lot of seeds, and the seeds of many new rootstocks don't grow into true-to-type plants. The scientists have shown that using plant cuttings or tissue culture is an acceptable alternative to starting new rootstock trees from seed, and it's a much faster way to create hundreds of thousands of plants.

The use of these alternative methods has dramatically increased propagation for some of the new rootstocks, so that nurseries are not limited by seed supply.

From 2018 to 2020, the HLB-tolerant "US" rootstocks were used to produce nearly 3 million new citrus trees, or about 37 percent of all trees propagated in Florida. These rootstocks have also proven effective in areas affected by other diseases besides HLB. The rootstock "US-942" demonstrated the most consistent outstanding performance in field plantings and was the most popular rootstock in Florida from 2018 to 2020, with about 1.8 million trees propagated during that 2-year period, or about 22 percent of all propagations.

A 6-year-old Owari Satsuma Mandarin tree on US-942 rootstock developed by ARS. In this trial, US-942 was the highest yielding rootstock, averaging more than 300 pounds of fruit per tree. (Photo by Jake Price, University of Georgia, D4632-1) 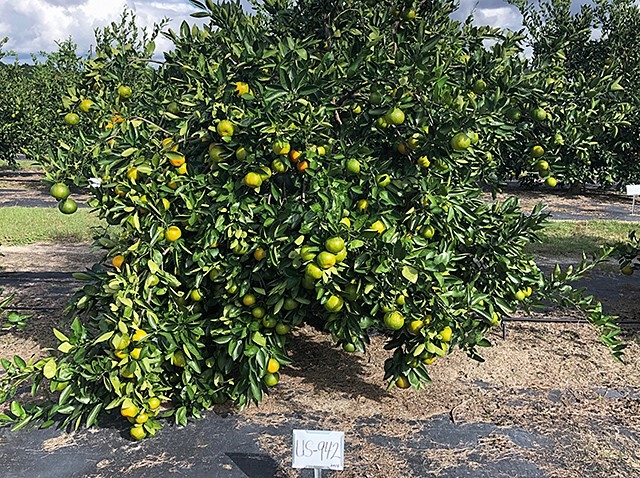