The Bohart-motif cake featured monarch, morpho and dogface butterflies, along with a dragonfly and assorted beetles. It is atop a replica of an insect-specimen drawer. It was proclaimed "too pretty to cut." (Photo by Kathy Keatley Garvey)
With spider decorations dangling from trees and entomologists representing everything from a horse fly to a tortoise beetle to a lamp, the UC Davis Bohart Museum of Entomology celebrated its 75th anniversary on Saturday, Oct. 23 with an outdoor Halloween party hosted by the Bohart Museum Society.

Rain dampened the Crocker Lane event but not the enthusiasm as the crowd toasted the work of the Bohart Museum and its director Lynn Kimsey, UC Davis distinguished professor of entomology. She has administered the Bohart Museum since 1990.

The UC Davis museum traces its origins back in 1946 to two Schmitt boxes filled with insect specimens collected by noted entomologist Richard M. Bohart (1913-2007), UC Davis professor of entomology and museum founder. Named the Bohart Museum in 1982, it is now the home of nearly eight million insect specimens, collected worldwide. Bohart senior museum scientist Steve Heydon and his wife, Anita, came dressed as steampunk figures. (Photo by Kathy Keatley Garvey)
Bond, who on Oct. 25 was named Associate Dean for Research and Outreach for Agricultural Sciences, UC Davis College of Agricultural and Environmental Sciences,  drew attention to the “remarkable planet that we live on and the diversity of animals and plants we share” and museum collections. UC Davis entomology student Gwendolyn "Gwen" Erdosh arrived in a monarch costume. She has nearly 30 million followers on Instagram as gwentomologist. (Photo by Kathy Keatley Garvey)
The specimens are an amazing resource, Bond told the crowd. “They not only record the diversity of insects in the past but sometimes we can use them as a key to solving problems associated with human diseases and agricultural pests and the like.” Entomologist and UC Davis biology manager Ivana Li prepared and served a buffet. Kimsey cut a specially decorated cake, adorned with images of a monarch, a morpho and a dogface butterfly (the state insect), a dragonfly, and assorted beetles. Tiffany Warrick of CreaTions N EvenTs, Rancho Cordova, created the cake and dozens of Bohart-motif cupcakes. Entomologist Jeff Smith, curator of the Lepidoptera collection at the Bohart Museum, came as Jeff Smith. (Photo by Kathy Keatley Garvey)
“As I was on the way out the door, I didn't have a costume so I grabbed the lampshade,” Maples quipped. Heydon begged to differ. “Some of his friends were planning to come as moths,” Heydon said.

With crayons and ink pens, attendees drew insects and pasted them on a piñata, formed in the shape of the number 75. Then, cheered by the crowd, they took turns whacking it, spilling out Halloween candies, and mementos from the UC Davis College of Agricultural and Environmental Sciences.

Financial support. Bond urged the crowd to help support the outreach mission of the museum. Bohart Museum scientists are seeking donations for their traveling insect specimen displays. They aim to raise $5000 by 11:59 p.m., Oct. 31 for their UC Davis CrowdFund project to purchase traveling display boxes for their specimens, which include bees, butterflies and beetles. These are portable glass-topped display boxes that travel throughout Northern California to school classrooms, youth group meetings, festivals, events, museums, hospitals--and more--to help people learn about the exciting world of insect science. UC Davis medical entomologist-geneticist Geoffrey Attardo (right), a global authority on tsetse flies, chats with Professor Jason Bond, a global authority on spiders. (Photo by Kathy Keatley Garvey)
“When COVID halted our in-person outreach programs, we were still able to safely loan these educational materials to teachers,”  Yang related.  “Now that UC Davis is open again to students we have all these bright, students on campus with fresh and diverse perspectives. We want to support their talent, so the funds we are raising will go to students for the creation of new traveling displays. This fleet of new educational drawers will expand and update what we can offer. Some of our current displays were created 15 years ago! One can only imagine all the places these drawers have been and all the people who have been inspired."

The Bohart Museum, currently closed to the public due to COVID-19 precautions, is located in Room 1124 of the Academic Surge Building on Crocker Lane. In addition to its insect collection, which is the seventh largest in North America, the museum houses a live “petting zoo,” comprised of Madagascar hissing cockroaches, stick insects and tarantulas, and a gift shop (now online), stocked with insect-themed t-shirts, hoodies, jewelry, books, posters and other items. Further information is on the website at https://bohart.ucdavis.edu. 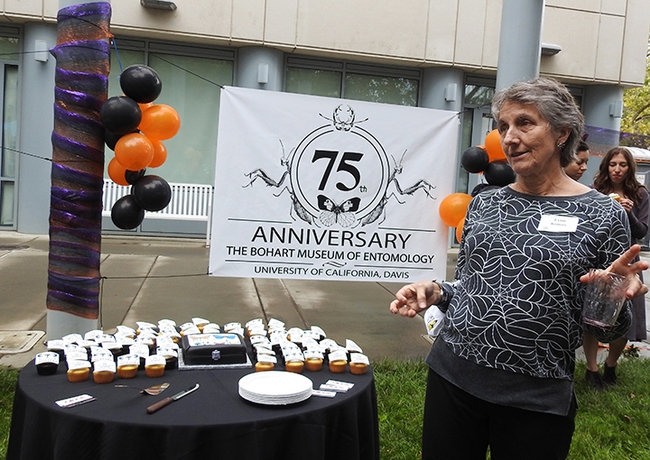 Lynn Kimsey, director of the Bohart Museum of Entomology, talks to the crowd before cutting the cake. (Photo by Kathy Keatley Garvey) 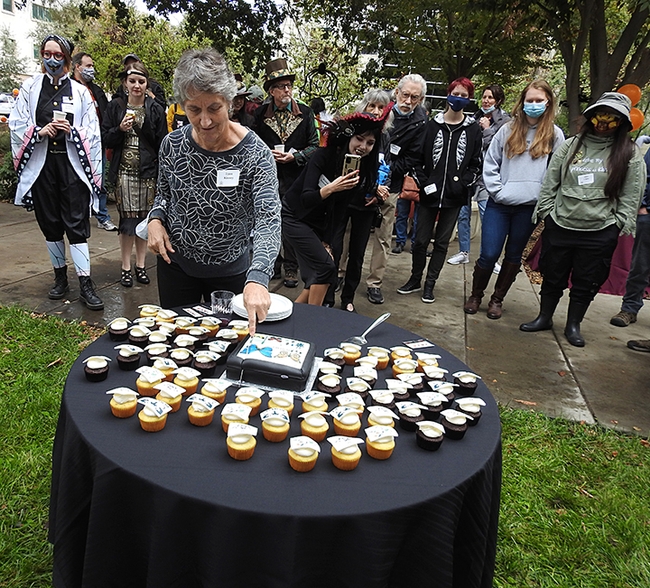 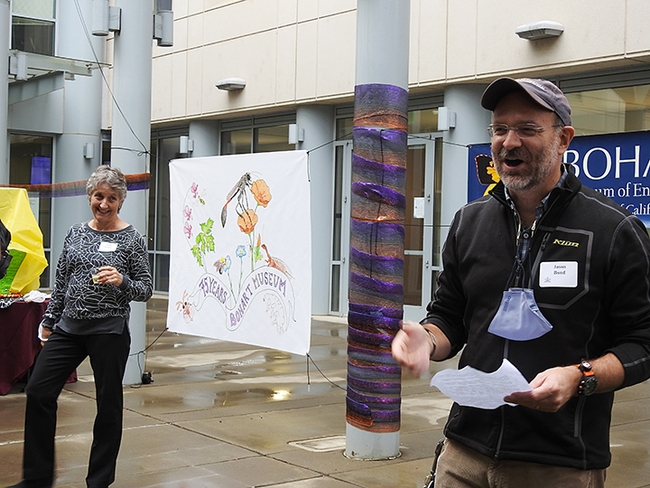 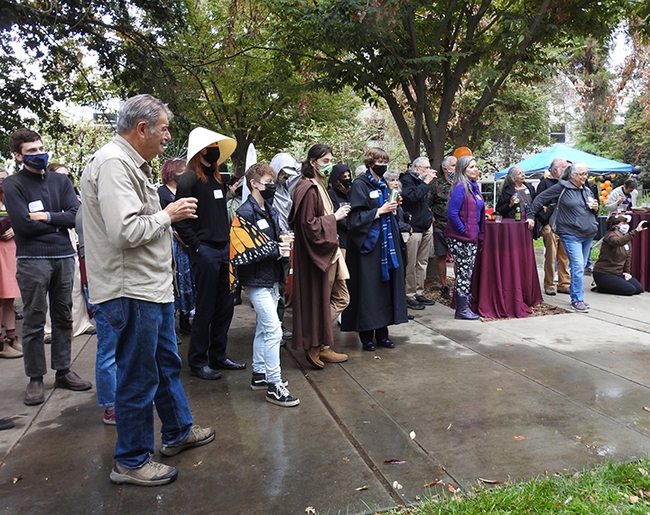 The crowd listens intently to the ceremony praising the work of Lynn Kimsey, director of the Bohart Museum of Entomology. (Photo by Kathy Keatley Garvey) 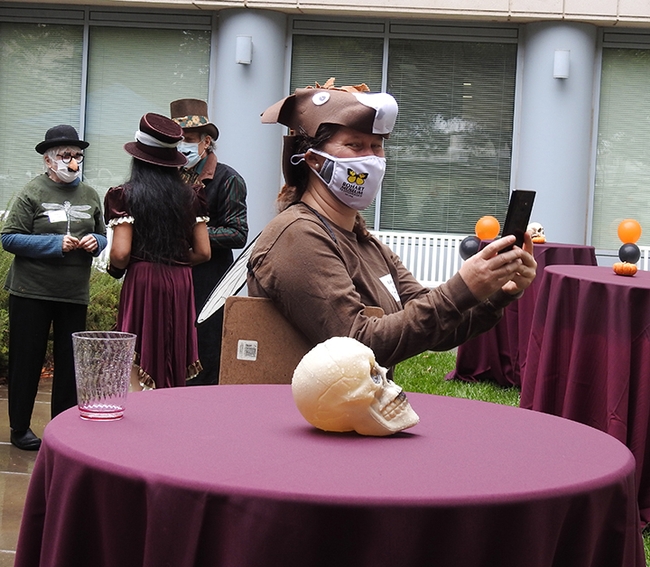 Tabatha Yang, the Bohart Museum's education and outreach coordinator, captures some images. In the background are Ellen Lange with Steve and Anita Heydon. (Photo by Kathy Keatley Garvey) 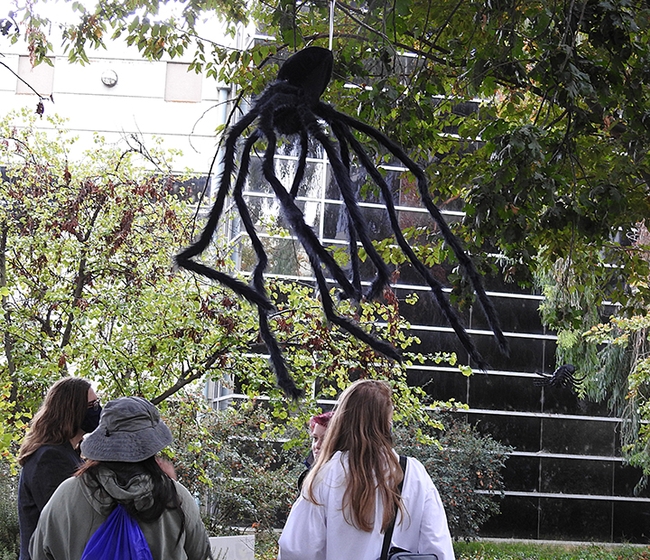 Spiders dangled from the trees at the Bohart Museum Society's party and guests paid them no mind. (Photo by Kathy Keatley Garvey) 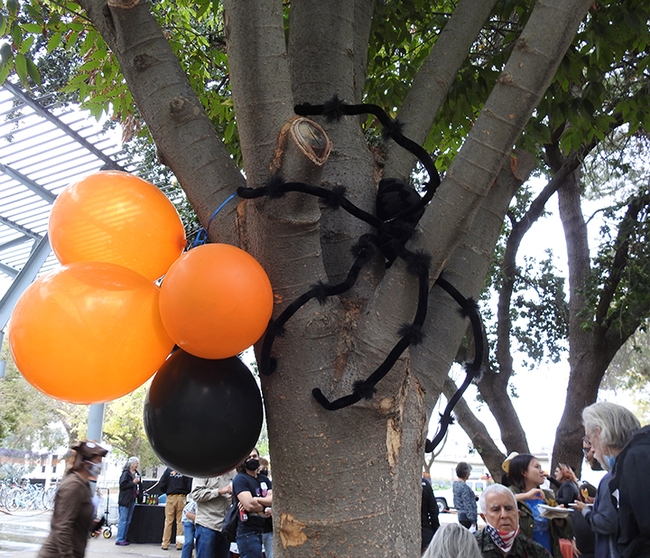 What kind of spider is this? Arachnologist Jason Bond identified the replicas. (Photo by Kathy Keatley Garvey) 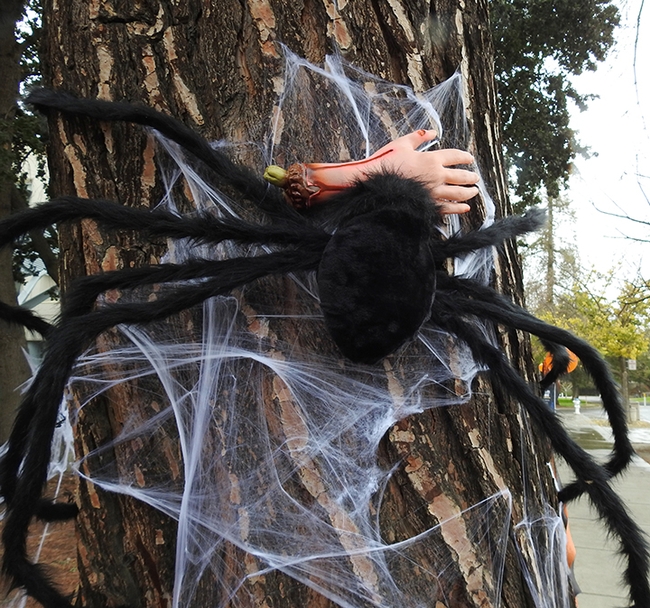 A hand mysteriously appears near a spider web. (Photo by Kathy Keatley Garvey) 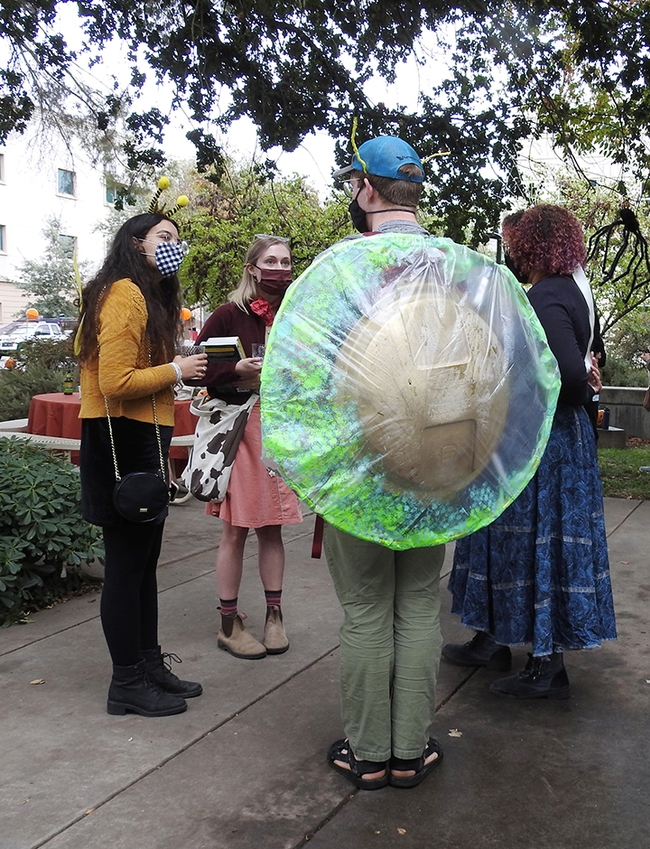 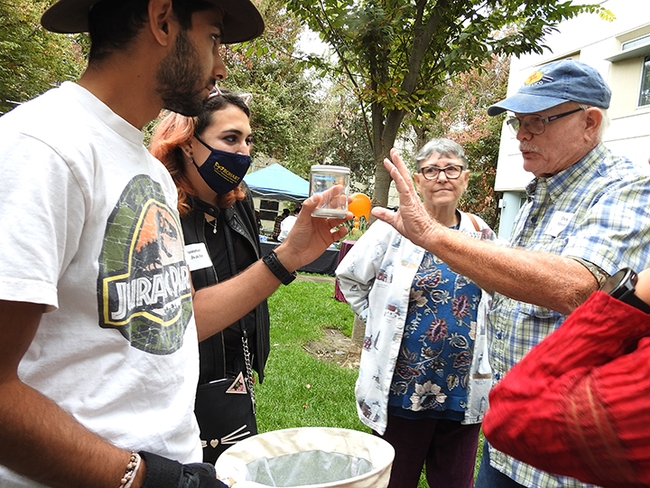 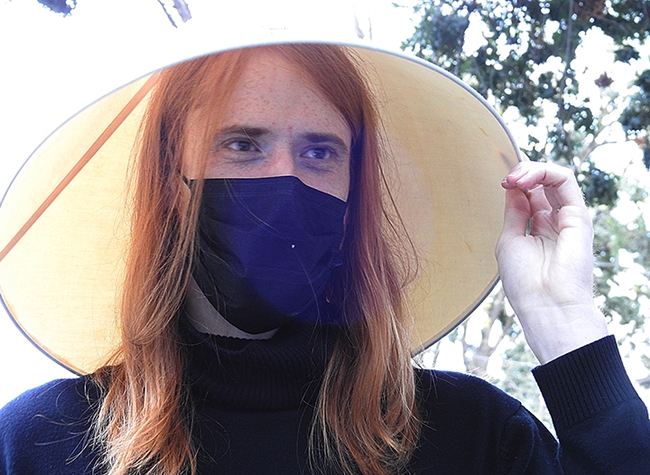 What's a moth to a flame or a light? Entomologist Benjamin Maples donned a lightshade as his costume. (Photo by Kathy Keatley Garvey) 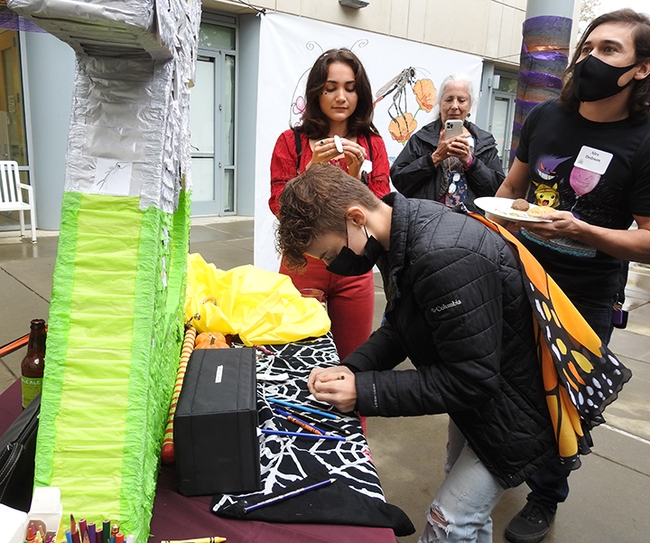 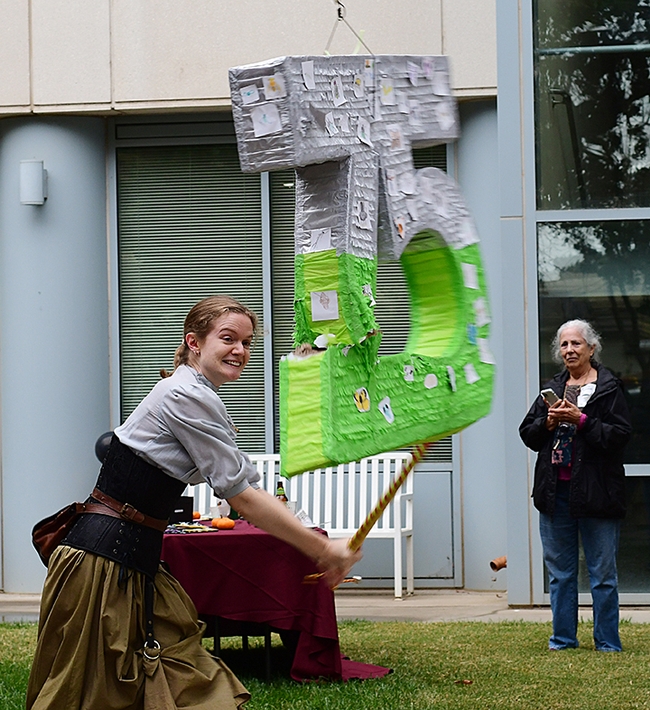 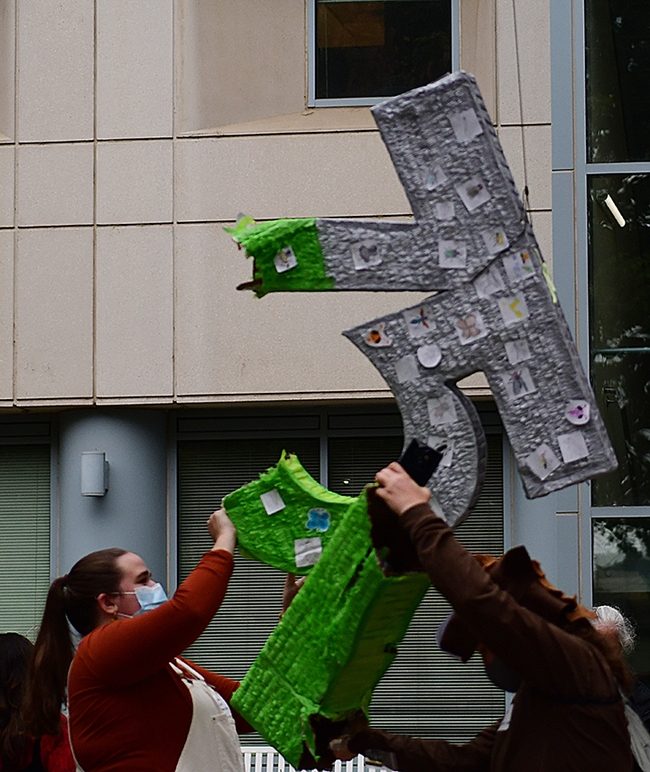 Emma Cluff, a UC Davis graduate and Bohart associate who works in the lab of Jay Rosenheim, UC Davis distinguished professor of entomology, takes down the piñata, with the assistance of Tabatha Yang, education and outreach coordinator dressed as a horse fly. (Photo by Kathy Keatley Garvey) This "Thank you" sign is part of the Crowdfund project to raise funds for traveling display cases. Crowdfund donations end on Oct. 31. (Photo by Kathy Keatley Garvey)