After the recent downpours, many people are also now experiencing the down-blow of autumn leaves.  In my former hometown, we would rake the leaves into a huge pile on the street curb.  Days or sometimes weeks later a city worker driving “The Claw” scooped the massive leaf piles into a dump truck to be hauled to the dump.  If another rain deluged the area before the leaves were collected, some of the leaves would float into the French drains and clog them up resulting in lakes at street intersections.  The first year I experienced this as a teenager, I remember my younger brothers making sailboats from cardboard milk cartons to float in the lake in front of our home.  It took days for the rainwater to fully empty from the intersections.  When we moved to Vacaville, we were told immediately, “Put the leaves in the can for the weekly collection.  Do not pile them up on the street.”  This was a non-issue for our home, a brand new one with a scrawny whip planted by the contractor in the middle of the front yard and a soaked, squishy, sticky clay mess devoid of any plants in the backyard. Today the recommendation is to recycle the leaves.  Let them land on the lawn, mow over and mulch them.  Let them decompose on the lawn to nourish the next Spring's leaves.  I don't know why this took so long to figure out.  Natural places have no one raking or mowing the leaves.  Leaves land, they decompose, and in the process, they provide nourishment to their source and surrounding trees.  It will likely take a while for this new practice to be accepted.  On my way downtown, I saw a professional lawn care company in front of an office complex, blowing the leaves into a pile, meticulously raking them up onto a tarp, and dumping the tied-up bundle into the back of their truck.  Then they mowed.  They left a patch of bright green lawn without a speck of mulched autumn leaves.  I expect they will be returning to add fertilizer soon.  I wondered, would they have needed any fertilizer, if they had mowed/mulched the leaves?

Watching them work, I was also reminded of a small sign I bought last year that sits in a raised bed in my backyard.  It says:  “Compost: Proof that there is life after death”. 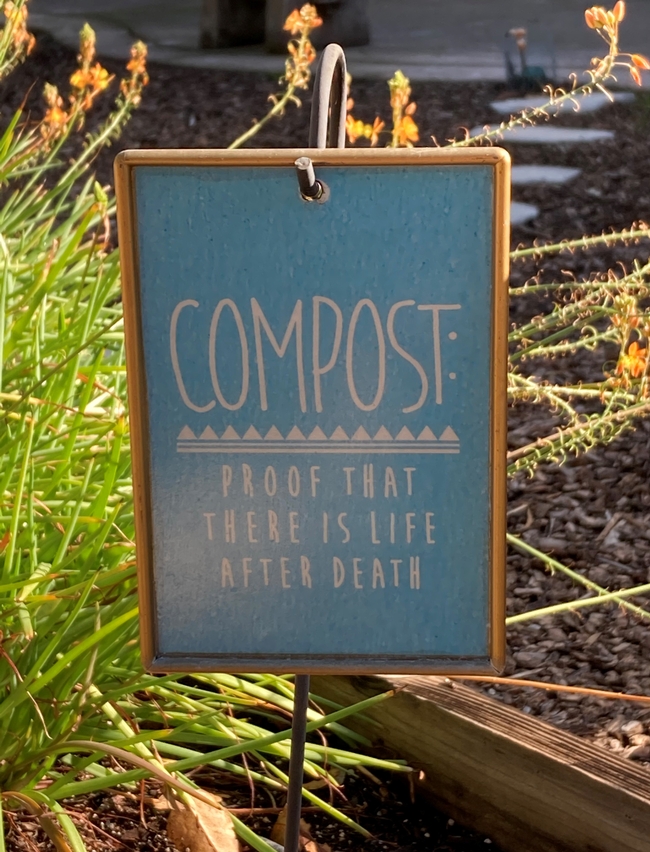 Comments: 1
Comments:
by howard fitzpatrick
on November 13, 2021 at 2:59 PM
unfortunately, my 100 foot redwood tree drops 4 stomped down yard waste barrels of detritus on my back lawn in the fall that I don't believe would be suitable mulch.
Leave a Reply: