As fall arrives and the rain starts falling, I start looking for the buckeye trees hoping to see the seed capsules starting to germinate. Their unique seed capsules have always intrigued me. The tree starts producing a brown, leathery fig-pear-shaped ball in summer. This brown husk sloughs off and reveals a shiny, hard, 1-2½ inch, dark brown capsule with a white-tan eyespot on the bottom. It resembles a chestnut and was called a ‘hetuck' by the Native Americans because the bottom of the capsule has the shape and color of a buck's eye. It is one of the largest seeds of any California native plant and any non-tropical plant species. The capsules are packed with nutrients and a lot of moisture content. This gives them an advantage in dry environments. Most California buckeye trees have only one seed per capsule. These capsules roll downhill by gravity or by animals. When the first fall rains come, the smooth capsule opens up and the seed started to germinate. It produces a glossy rose pink or red stem, topped with tiny chartreuse green, fingered-foliage; this is the infant tree. In the winter the buckeye's characteristic branches are leafless, crooked, and filled with capsules. Their smooth, silver-gray bark illuminates in the winter light. These multi-trunked trees are known for their distinctive winter display and are gorgeous during a full moon. Aesculus californica is one of the first trees to put out new, apple-green leaves during the winter-early spring. The leaves are opposite, dark green on top, silvery, light green on the undersides, a smooth leaf surface, and have finely serrated margins, its leaf arrangement is palmately compound with 5 leaflets, rarely 7. I have fond memories of this tree from my younger days. We would hike during the summer and see a lot of California Buckeyes that looked dead. When it's hot and there is no water available, they shut down their systems and shed their leaves. The Buckeye leaves that survive the summer will turn a beautiful red fall color and fall to the ground. In the 1970s, plant ecologist Harold A. Mooney found that buckeyes have high photosynthesis rates in spring. When that process shuts down, the tree pulls in carbohydrate reserves from its trunk and roots to supply its seeds with nutrients. This fruit production takes a lot out of a buckeye branch. These fruiting branches may be late to leaf out the following year. These California natives are doing what they do best. They evade the drought and stop its evaporative losses by shedding their leaves in summer. This tree's dormancy, along with the golden hues of the wild oat grasses, is what makes California so beautiful. In spring, many people ask me what are those beautiful white trees in bloom? The large, upright candelabra of white blossoms is a magnificent thing to see. While in flower, these trees will be alive with a massive amount of multi-branched, 4-12" inflorescences (flower spikes). Bearing a profusion of fragrant, white to pale pink, flowers with orange stamens. The California buckeye is polygamo-monoecious. A tree with both unisexual and bisexual flowers on the same tree.  Because they have all four characteristics of a flower: sepals, petals, stamen, and pistil, bisexual flowers are referred to as “complete” or “perfect” flowers. Most of the 200 or so flowers in each of a buckeye's large inflorescences are male; only about 10 percent have ovaries. Despite the services of pollinators like the variable checkerspot butterfly, less than 10 percent of that 10 percent produce fruit, each typically with a single seed. The Aesculus californica is a nectar source for early spring migrating butterflies, the sequoia sphinx moth, and a host plant for the Pacific azure butterfly. It also attracts native bees and other pollinators.

This tree is not meant to be near apiaries. This tree is detrimental to honey bees but not native bees. The seeds are poisonous, as is the whole tree. This makes them deer, gopher, and rabbit resistant. The only animals that can safely consume the raw seeds are chipmunks and squirrels. The Native Americans used the seeds for numerous applications. They would crush the seeds, and throw them into a stream, this would stupefy the fish, and they'd scoop up the fish. The seeds were used as a hemorrhoid remedy, and also as a flour source that was high in protein. This is after they had boiled, leached, and ground the seeds, to remove the toxins. Native Americans used Buckeye wood to make bowls and use it as a fireboard for bow drills. The bark was used for snake bites and toothaches. Settlers in the U.S. used to carry the seed pods around in their pockets for good luck.

Buckeye trees are an ancient lineage. Although taxonomists disagree as to whether the genus Aesculus originated in Asia or North America, fossils document its presence in the American West in the Paleocene, just after the downfall of the dinosaurs. California buckeye's ancestors appear to have been accustomed to cooler, wetter climates than our present Mediterranean regime. With the advent of drier summers about three million years ago, many of the buckeye's forest associates died out, but it survived by cutting its evaporative losses and shedding its leaves in summer also known as drought-deciduous.

The California Buckeye tree is widespread in California and has one small population in southern Oregon. It is a familiar presence, as it grows from the western coast to inland foothills, from the Tehachapi mountains to our Sierra Nevada mountains. These important trees live for 50 to 150 years old. They can grow 10 inches a year with optimal conditions. They are good for bank stabilization. When fires occur, the trees can burn but will resprout from the roots. Most of the time, these trees grow to 15-20 feet tall. This tree is considered one of ‘California's Big Trees'. A record size, CA Buckeye tree is growing in Santa Cruz. This 46-foot tall tree, with a 14.5-foot circumference and a 60-foot canopy, is a joy to see. If you have room for this California beauty, please plant one. 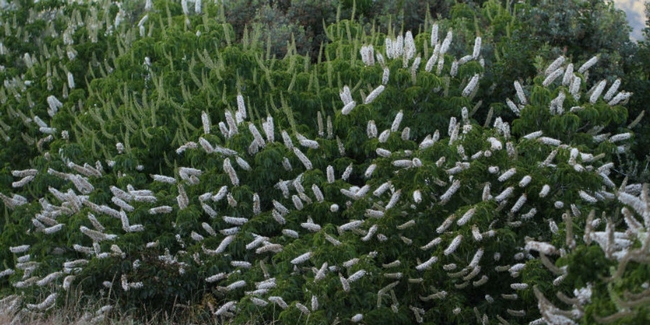 Comments: 1
Comments:
by howard fitzpatrick
on November 20, 2021 at 10:04 AM
Excellent article. I learned from it and enjoyed it greatly.
Leave a Reply: