Lohitashwa “Lohit” Garikipati with praying mantids. (Photo by Joel Hernandez)
When praying mantis scientist Lohitashwa “Lohit” Garikipati, a 2019 entomology graduate of the University of California, Davis, joined a Bohart Museum of Entomology Bioblitz to Belize that summer, he returned with three M's: memories, mantids--and the makings of a publication.

The “makings,” is now published. It's the first of what is expected to be many in his entomological career.

“A Checklist of Mantodea of Belize, with a Regional Key to Species,” co-authored with UC Davis professor and arachnologist Jason Bond, is now online on ZooKeys.

“Lohit did a great job on this, and there's even an online Lucid identification key,” said Bond,  the UC Davis Department of Entomology and Nematology's Evert and Marion Schlinger Endowed Chair in Insect Systematics and the newly selected associate dean of the UC Davis College of Agricultural and Environmental Sciences.

“This is a great example of undergraduate research opportunities in entomology,” said Bond. Garikipati worked in the Bond laboratory as a lab assistant before and after receiving his bachelor's degree in entomology in June 2019.  He is now studying for his master's degree in biology at Towson University, Md., with advisor Christopher Oufiero.

For the ZooKeys publication, Garikipati and Bond updated the list of known Mantodea in Belize, adding 12 new species to the country records, bringing the total known species of Mantodea in Belize to 21. They provided information on habitat and microhabitat observations; and a regional dichotomous key and Lucid interactive key to known species in Belize. They also included a list of other possibly endemic species. In addition, the scientists remarked on the merit of further sampling efforts in central America, based on recent studies.

“Our findings,” they wrote in their abstract, “suggest that our understanding of Central American Mantodean diversity could be vastly improved by further documentation.”

Grateful to Jason Bond. “After a probably too lengthy amount of time, I am extremely pleased to present my first publication,” Lohit wrote on his Facebook page. “I cannot understate how grateful I am to Jason Bond for providing his time and advice to help guide me through this process, it quite literally would not have been possible without his enthusiasm and support. Thanks to the other members of the Bond lab as well for their advice and critique of various parts of the manuscript during its development. Hopefully we can continue to update and document the fauna of the southern Yucatan peninsula and further our understanding of mantis distribution.” This is one of the illustrations in the publication, “A Checklist of Mantodea of Belize, with a Regional Key to Species” in ZooKeys, co-authored by Lohit Garikipati and UC Davis professor Jason Bond. (Screen shot)
While at UC Davis, Garikipati shared his expertise of mantids at the Bohart Museum's open houses, displaying mantids he reared, including orchid and ghost mantids, and fielding scores of questions. He worked as a student lab assistant in the Bohart Museum and held the offices of vice president and secretary of the UC Davis Entomology Club. He also co-administered a “Mantis Keepers” Facebook page,  then the world's largest mantid community with some 7000 members. Today Garikipati now does what he calls “a fair bit of science communication on my instagram, @mantodeology!”

Mantids have long fascinated Lohit, who grew up in Pleasanton, Alameda County. “I first became interested in praying mantises when I was about six years old,” he said. “I found a praying mantis on my aunt's curtain in India and had no clue what the insect was! After a lot of Googling and finding out that people kept various species as pets, I started rearing both native and exotic species.”

“Admittedly, mantises are not the easiest organism to rear; it took me a few years before I bred my first species, Mantis religiosa (Linnaeus),” Lohit said. “I was really fascinated just by their hunting methods and cryptic strategies; I think I could watch them hunt another thousand times and still be as fascinated. Currently, I think I'm pushing 40 or 50 species that I have reared, with representatives from most families. Captive observations have been a large part of fueling my interest and raising questions about these organisms, as they've afforded me the chance to watch organisms that are often rarely found in the wild.”

High Biodiversity. The June 22-July 6 bioblitz, led by biology professors and Bohart associates Fran Keller of Folsom Lake College and Dave Wyatt of Sacramento City College and headquartered at Toucan Ridge Ecology and Education Society (T.R.E.E.S) Field Station and Research Center, spanned four locations.  The area boasts "some of the highest biodiversity the country has to offer," according to its website.

“Lohit and Brian Fridie (undergraduate at the University of Florida, Gainesville)  captured many more individuals and more species than I ever saw on any of our trips,” said Keller, who holds a doctorate in entomology from UC Davis, where she studied with major professor Lynn Kimsey, director of the Bohart Museum and a UC Davis distinguished professor of entomology. “Granted, I was collecting everything and leading the trip but having specialists on the trip helps us gather and document insect diversity greater than we could do with just Dave and I collecting.” A praying mantis collected in 2016 during a bioblitz to Belize. It's held here by tour leader Fran Keller, professor, Folsom Lake College. (Photo by Fran Keller)
What amazed Garikipati the most about the mantids he found?

“Possibly the thing that surprised me the most was the sheer underrepresentation of taxa in the country,” Garikipati said. “I had expected to maybe find one or two new country records, but I did not expect to more than double the number of species recorded from the country! The other thing that astounded me was how numerous and diverse insect populations were as well (this was my first time collecting in the tropics). Despite the sheer scope of the environment there, mantises were not an uncommon find (though they are still as a whole much more difficult to find than many insect groups).”

“It was a real pleasure searching for mantises in Belize,” Garikipati said. “My favorite find was most likely seeing wild individuals of species I'd only be able to see in pinned collections and on iNaturalist. There is something so enchanting about seeing an animal in its natural habitat, and these observations bring up many questions. It was definitely a fun experience and I am very happy to be able to contribute to our understanding of these animals.”

More Than 50 Specimens. He and his colleagues collected more than 50 specimens from 14 genera and 19 species as part of the survey. Using the specimens they collected, they generated a dichotomous key and a Lucid interactive key.

“The aim is to provide both citizens and entomologists unfamiliar with this group with an easy method to identify collected species with high accuracy,” wrote Garikipati and Bond. “Photographs in the Lucid key are included to aid with character determination.”

In their publication, the scientists thanked Julio Rivera (an entomologist at Universidad San Ignacio de Loyola in Lima, Peru)  for his assistance, patience, and providing some of his unpublished work to assist in identification. “We also thank Brendon Boudinot (UC Davis doctoral alumnus) for his boundless energy, support, and methodological feedback; Philip S. Ward (professor and ant specialist at UC Davis) for assisting in identification of Formicidae; Brian T. Fridie (undergraduate at the University of Florida, Gainesville) for his assistance in collecting mantises; and one anonymous reviewer for feedback on an earlier version of the manuscript.”

Garikipati's future plans? “I am looking to continue to incorporate ecology into my comparative morphology work,” he said. “Currently, I am investigating diversity in prey capture mechanisms in mantises, which may have implications for prey specialization.” His thesis title: “Diversity of Prey Capture Mechanisms in Praying Mantises: Implication for Prey Specialization.”

“Mantises,” he said, “have long been homogenized--until relatively recently--both in terms of their behavior and morphology by the general public, and I'm hoping by showcasing diversity both in behavior and morphology, the public's perception of these animals will change. “And this research will provide us valuable insight into the impact mantises have in the ecosystems they are in, as well as their potential use as bioindicators for conservation purposes.” 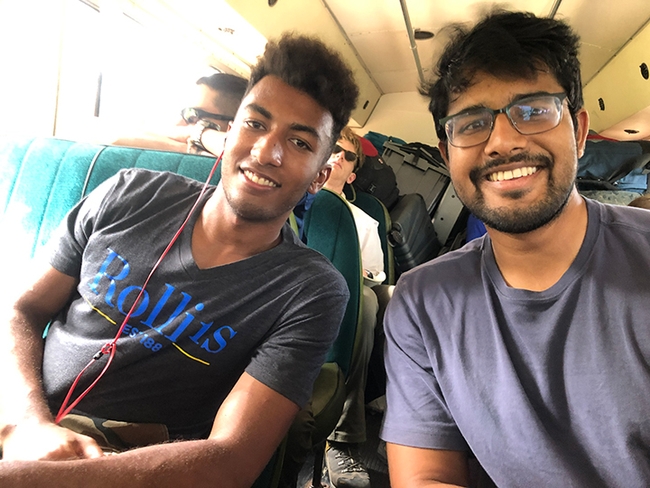 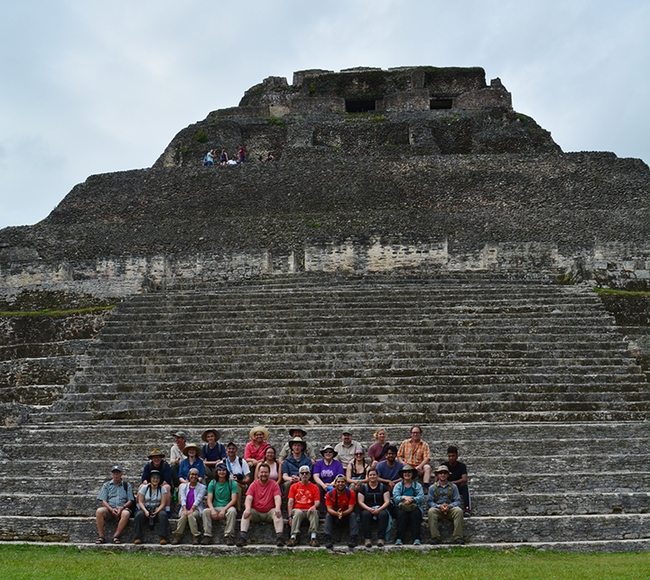 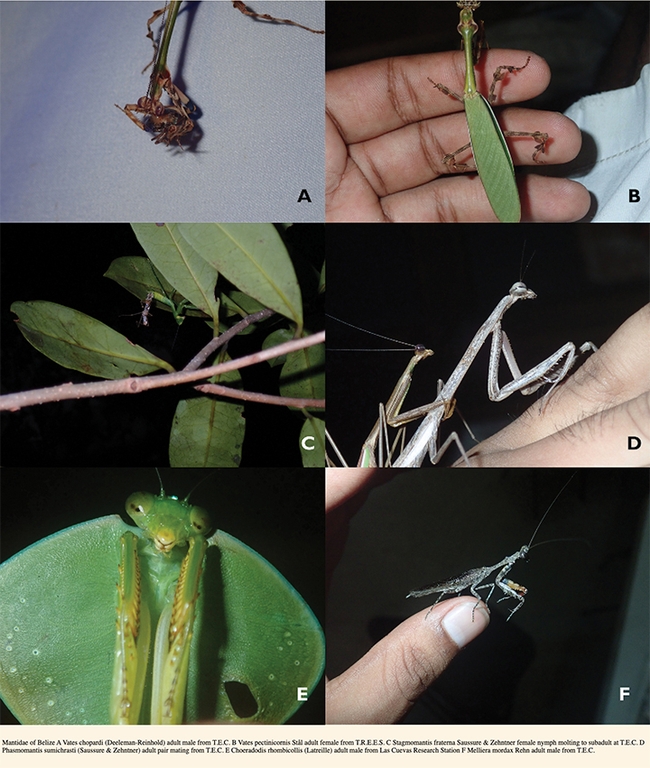 This is one of the illustrations in the publication, “A Checklist of Mantodea of Belize, with a Regional Key to Species” in ZooKeys, co-authored by Lohit Garikipati and UC Davis professor Jason Bond. (Screen shot) 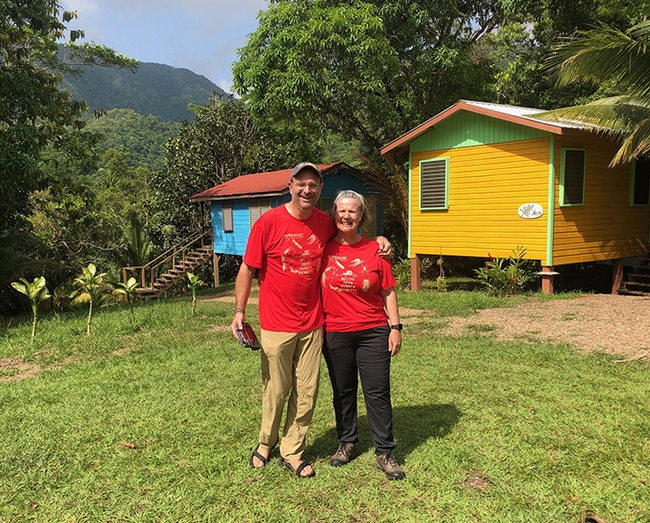