The Sacramento Bee recently warned readers of certain plants that might at first appear to be lovely, delicate greenery, but in time can become the vegetative equivalent of a street gang viciously expanding its turf. The story was picked up yesterday by Scripps News Service.

The most notorious garden thugs, the story said, are bamboo and mint.

Ellen Zagory, the horticulture director for the UC Davis Arboretum, told reporter Debbie Arrington that she has neighbors with running bamboo, which means she has bamboo shoots constantly coming up in her own yard.

"It's really scary," she was quoted. "I've seen concrete patios where every little crack and seam had bamboo coming up. When I see some come up, I dig a big, long trench down as far as I can go and get as much as I can."

"If you really like to divide plants and share them with others, you can grow bee balm," McClure was quoted. "But if not, it's incredibly invasive."

Other problem plants are vinca major, blackberries and Bermuda grass.

UC Master Gardener Bill Pierce added false strawberry to the list. The deep green ground cover with little yellow flowers and berrylike fruit has many Sacramento gardeners pulling their hair out as it rapidly invades lawns and flower beds.

"They're pretty shallow-rooted," McClure said of the false strawberry. "You've got to be diligent."

Some of the plants now considered to be invasive nuisances had in the past been recommended for low-water, low-maintenance gardens, the Bee article said.

"In particular, there's a lot of concern over Mexican feather grass," McClure said. "It's now considered an invasive plant (and a danger to wildlife areas)."

Drought-tolerant Mexican evening primrose, which is attractive to bees, butterflies and birds, was a hit in low-water gardens.

"It's so beautiful, so tough and doesn't need any water," Zagory was quoted. "But if you put it where it has water, it will take over the whole yard." 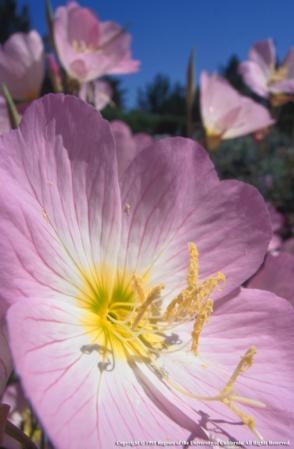 Mexican evening primrose is pretty, but can become an invasive weed.
Tags: garden (38), invasive (3), Judy McClure (2)
Comments: 1
Comments:
by Wendy West
on June 24, 2011 at 3:47 PM
thanks for highlighting the ornamental invasives problem!
Leave a Reply: