Coomer, a member of the laboratory of nematologist Shahid Siddique of the UC Davis Department of Entomology and Nematology, just won a world-wide competition sponsored by the International Federation of Nematology Societies (IFNS) for her three-minute thesis on root-knot nematodes.

She delivered her video presentation virtually on “Trade-Offs Between Virulence and Breaking Resistance in Root-Knot Nematodes.” She will be awarded a busary and plaque at the 7th  International Congress of Nematology (ICN), set May 1-6 in Antibes, France.

Coomer earlier was selected one of the nine finalists in the 22-participant competition, vying against eight other graduate students from the University of Idaho, Moscow; and universities in England, Australia, Brazil, Ireland, Kenya, Belgium and South Africa.

"Our entire lab is glad for Alison winning this award," said Siddique. "This is an outstanding performance and Alison has really been working hard for that. I feel proud about it. I am also looking forward to Alison's presentation at ICN." Copeland discussed "Determining the Spatial Distribution of Pratylenchus quasitereoides/Pratylenchus curvicauda in the WA Wheatbelt, and Understanding How They Find Host Roots."

IFNS hosts the competition, IFNS 3-Minute Thesis, "to cultivate student academic and research communication skills, and to enhance overall awareness of nematodes and the science of nematology." Alison Coomer taking notes on an experiment involving cucumbers in a UC Davis greenhouse.
The competition began with 22 participants. Each was required to present only a single static slide, and not use any props or sound-effects. In the finals, a panel of judges--six nematologists and three non-experts from other areas of plant sciend science--scored them on the quality of their research presentation, ability to communicate research to non-specialists, and the 3MT slide.

In her presentation, Coomer began with: “Root-knot nematodes, specifically the MIG-group, consisting of Meloidogyne incognita, javanica, and arenaria, are the most damaging of the plant parasitic nematodes causing severe yield loss in over 2,000 different plant species including tomatoes. The Mi-gene, which is a resistance gene in tomato, has been used in commercial farming and has been praised for its effectiveness towards the MIG group. This gene has been cloned but the mechanisms of how it's resistance works is still unknown.”

“We do know that with the presence of the MI gene, plants are more durable and will restrict infection and reproduction, by inducing an immune response within the plant,” Coomer pointed. “Although this resistance gene has been reliable for many decades, resistance breaking strains of root-knot nematodes have emerged threatening the tomato industry.”

Coomer related that her research “compares two strains of the root-knot nematode M. javanica. One strain is the wildtype, which has been isolated from fields, we will refer to it as VW4. This nematode can infect tomato plants, but when the MI gene is present, the nematode is blocked from successfully infecting. The other strain is a naturally mutated version of VW4. This strain breaks the resistance provided by the MI gene and therefore infects plants that contain the MI gene. I have labeled this strain as VW5. With the help of research like mine we can stay ahead of the resistance breaking strains and prevent major crop loss in the future.” An image of root-knot nematodes (shown in pink) in infected tomato roots. This was stained with acid-fuchsin.
“Sequencing the entire genome of VW5 when compared to VW4, we can see that there is a large deletion in its genome, but we have yet to find out what genes were deleted and how important they are when it comes to infecting other plants,” she continued. “My research is focusing on what happens when we infect the resistance breaking strain, VW5 on plants not containing the MI gene.” Root galling on a tomato plant that is infected with root-knot nematodes.
In detailing her research, she said “My infection assays have been designed as displayed by the flow chart. Tomato and cucumber were used since neither variety contained the MI gene. 500 J2s were inoculated and at 34 days post inoculation, roots were harvested, and eggs were collected. After staining, galls were dissected, and nematode stage development was recorded for juveniles and females; comparisons between the two roots were made. As displayed by the graph and image, consistently, we see a reduction in the number of eggs produced in plants infected with VW5 than with VW4. The image also shows significant reduction in galls for VW5s as well. Two main objectives remain for this project: How does VW5 break MI resistance and why is VW5 less fit on plants that do not contain the MI gene. With the help of further infection assays and genomic data regarding gene presence and transcription analysis we hope to shed light on this process, identify candidate genes in action, and overall identify how the mechanism of the MI gene works.”

Coomer, a doctoral student in plant pathology with an emphasis on nematology and advised by Siddique, is working on her dissertation, "Plant Parasitic Nematode Effectors and Their Role in the Plant Defense Immune System."

Coomer, originally from the St. Louis, Mo., area, received two bachelor degrees--one in biology and the other in chemistry--in May 2020 from Concordia University, Seward, Neb., where she won the Outstanding Graduate Student in Biology Award. She served as a biology lab assistant and taught courses in general biology and microbiology.

As a biological science aide/intern, Coomer did undergraduate research in the Sorghum Unit of USDA's Agricultural Research Service. Lincoln, Neb.  Her work included collecting, prepping and analyzing DNA, RNA and proteins to identify genes that contribute to an under- and over-expression of lignin in sorghum plants. 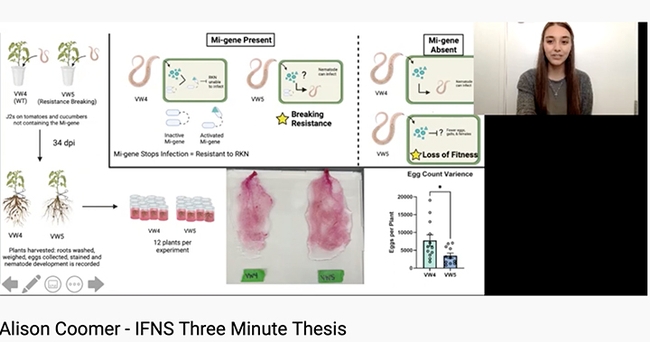