One of the less well understood issues in our industry on the Central Coast is the phenomenon of yellowing of strawberry plants in certain areas of the district, especially in a number of fields north of Salinas.  The following is meant to share what we have found out on this problem so far, and discuss some of my thoughts about the most probable cause.

While there are many causes of yellowing in strawberry plants, for example lack of nitrogen, iron or zinc, the yellowing of strawberry plants in the Salinas area seems to stem from something else and occurs in the same area, year after year.  In fact, some spots no more than a few meters square give the same symptoms every time strawberries are planted there.  Yet, subsequent plantings of other crops such as broccoli or lettuce do not show any yellowing.

To address the thought that the yellowing comes from nutritional deficiency, I have taken many samples with colleagues of these yellow plants and never found anything exceptional nutrient wise.  Consider the table below which is an eightfold replicated comparison taken in a large strawberry field south of Castroville with large areas of yellow plants in a field of healthy green plants:

What one immediately sees from the table above is that the trend is actually for yellow plants to have HIGHER levels of essential nutrients than their apparently healthier counterparts.

Interestingly, manganese is very much higher, and a t-test tells us significantly so, in the yellow plants than in green plants.

So, the assumption that nutrient deficiencies are leading to this yellowing of the plants is not backed by the evidence of a plant tissue test.  To be sure, yellowing from nitrogen tends to be stronger on the outer, older leaves as this mobile nutrient is transported to the younger leaves.  Deficiency of zinc generally has a green halo around the leaf edges.  Perhaps the symptoms are consistent with that of iron deficiency, and indeed the iron from the soil sample from around the plant itself is significantly higher around the green plant than the yellow.  However, the levels of iron in the evaluated plants are well above those described as critical by UC Publication 4098 and Tim Hartz’s strawberry fertility work in 2010.

One of the considerations though all of this research is that the yellowing is caused by waterlogging and a subsequent deficiency in the amount of oxygen available to the plant.  This is not necessarily water or saturation that is easily measurable at the surface and may be deeper down in the bed.  It is also possible that salinity, which has a slight inverse effect on the solubility of oxygen in water, is also playing a role.

Plants respond to decreased oxygen levels, known as hypoxia, in different ways and some species are in fact quite sensitive to this condition.  Roots, as the plant organ which face the hypoxic condition in a waterlogged soil, respond to this stress by switching from respiration to a fermentative metabolism which in turn increases the demand for carbohydrates.   That this metabolic change in strawberry is the cause of the yellowing in our strawberries is something which yet remains to be explored.

As a final thought, consider the the fourth picture below in which the drip tape on the right was clogged and less water delivered to that bed for several weeks.  The result was a lessening in the yellowing of the plants in that bed, and only that bed.  Absolutely, this is not a very scientific evaluation, but it does strongly suggest that excessive water from the plant's perspective has something to do the yellowing we know from around Salinas. 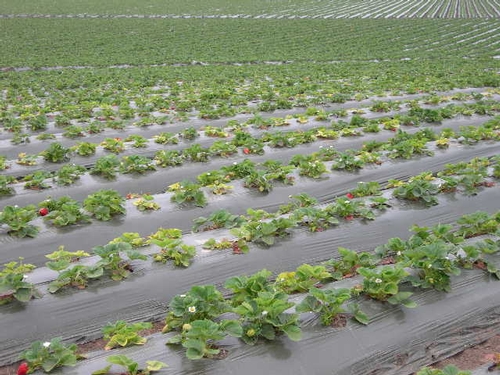 Field of healthy plants interspersed with yellow ones 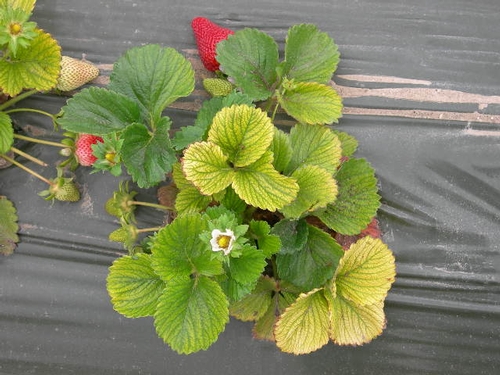 Symptoms of plant yellowing in Castroville 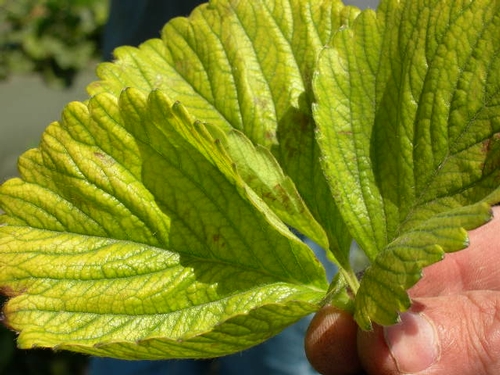 Close up of yellowed leaf. This one was from the Cooper Road area in 2009. 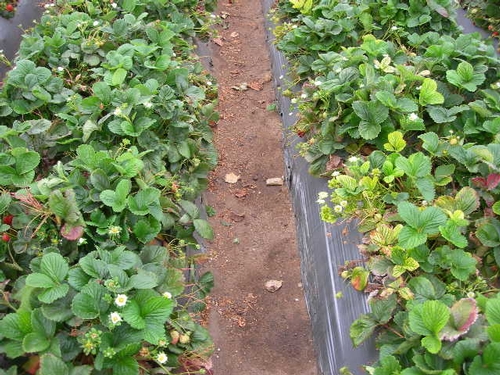 San Andreas strawberry variety. Row on left had problems with the drip tape and consequently was watered less. Yellowed plants are also less prominent and fewer in number.
Tags: hypoxia (1), nitrogen (17), nutrition (4), strawberry (74), waterlogging (1)
Comments: 5
Comments:
by M, Mohsin Ali
on September 11, 2013 at 6:40 PM
I am from Bangladesh. I was cultivated strawberry 5 years. This year my plant do not perform rightway. She was yellowed leaf and do not produce maximum runner. I did not identified what is the problem.
by Mark Bolda
on September 12, 2013 at 6:21 AM
Mr. Mohsin Ali, I am indeed curious as to what might be going on here but I need a lot more to go on than your comment. As you know from some of the other posts I have written, yellowing of plants and a lack of vigour in strawberry can be caused by many things.
To start, some background as to the soil type and environmental conditions of your strawberries would be useful.
I am afraid also that I do not know much about Bangladesh, so you will need to give me some background as to the seasons, pest complex and soil fertility. Regardless, I think we can make some progress in understanding your situation.
Please send me more information in an email, I can't write the address here but it is mpbolda "at" sign ucdavis.edu
by Shelly M Moss
on July 13, 2019 at 10:14 AM
I live in Medford, Oregon which is about 40 miles from the California border. I have struggled this year with yellowing strawberry leaves.
I grow them in hay bales. I don't know what variety the red ones are but I do have Hulu berries in there as well. They have produced a lot of berries at the beginning of the season and tons of runners after.
They aren't bothered by pests except the occasional snail/slug. They are 3rd year in growth with, I don't know how old they were before that.
I read that they may be over watered. I will try a little less until the weather gets into triple digits. I have never had nitrogen deficiency in hay bales gardens but I will try adding more to these strawberries.
Is there anything else you would recommend?
by Mark Bolda
on July 13, 2019 at 7:17 PM
Hi Shelly,
If you've read a lot of this blog, and I assume you have, you will know that there are many causes of yellowing in strawberry plants! I doubt that it is the issue described here, and I agree with you that snails and slugs are not your issue either. It very well could be overwatering (I've seen them go yellow from that, yes), but if you could send a picture this way I could start in on some other ideas.
For sure, if gets hot, water the plants regardless of the yellow!
by Kelly
on November 4, 2020 at 4:21 PM
I must say, my problems with this type of yellowing have followed over-watering episodes, generally combined with heat and humidity in tropical South FL following hot-rainy summers. As all strawberries are in various stages of development, from runners to mature plants, over-watering and recovery affect each stage differently and such yellowing is common afterwards. First stage is the typical over-watering pale green or yellowing pattern; followed by a large leaf die-off (even after being corrected); then sporadic iron-deficiency-like yellow vein status on some leaves; followed by a self-thinning, tall legginess status; and then recovery. It's a factor of the various life-cycle stages in regard to how each plant responds to the over-watering episode. Strawberry is a crazy self-regulator. It just takes some time for it to go though it's recovery process to get water-stasis. As much as it's usually ill-advised, shallow overhead watering is the best temporary treatment to allow deep roots to dry (or die) while promoting new growth via runners; all this, despite being counter-productive in general for strawberries due to fungus proclivities.
Leave a Reply:

Hot on the Trail of Zythia in Strawberry
December 23, 2020