The first indicator cited in a San Jose Mercury-News story about the 2008 drought is the number of phone calls coming into the local UC Cooperative Extension office.

The second paragraph of the article says the "unusual number of calls" are from people asking why their camphor trees and liquid ambars are wilting.

"This year we've had so little rain that for trees that are not adapted — and even those that are — there is simply no moisture in the ground except for (what) we are applying," the Mercury-News quoted Bethallyn Black, UCCE urban horticulture advisor in Contra Costa County.

She said some areas have even less water in the ground because the water table has fallen below the reach of trees whose roots have not adapted to a Mediterranean climate, according to the article.

The Mercury-News article, written by Rowena Coetsee, runs parallel to a press release distributed by the UCCE News and Information Outreach office last week that noted native blue oak trees in foothill areas are losing their leaves and turning color way before normal.

According to UCCE oak specialist Douglas McCreary, the ability to shed foliage early is a survival mechanism of the native trees. When faced with low soil moisture, the trees can either keep their foliage and continue losing water through leaf pores, or drop their leaves and conserve moisture. In the long term, shedding leaves keeps the trees from drying out completely and dying. 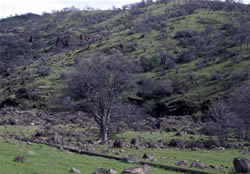