Kathy Keatley Garvey, communications specialist for the UC Davis Department of Entomology and Nematology, wrote the news article on "An Amazing Doctoral Opportunity Few Receive,” in March of 2021. The article won the “writing for newspapers” category. (See https://bit.ly/3MfuaLn)

“An ‘About Me' poster hanging in her childhood home in Concord confirms it: ‘When I grow up, I want to be an entomologist.'

Millena, who over a two-year-period worked as a student researcher in the laboratory of UC Davis distinguished professor Jay Rosenheim, studied the bizarre Strepsiptera endoparasites that attack their hosts, the Ammophila (thread-waisted) wasps. Millena went on to receive her bachelor's degree in entomology in 2021, and a rare four-year, full-ride doctoral fellowship from the American Museum of Natural History.

While at UC Davis, Millena studied Ammophila specimens at the Bohart Museum of Entomology, which houses a worldwide collection of more than 30,000 Ammophila (among the Bohart's eight million specimens). As larvae, members of the order Strepsiptera, known as “twisted wings,” enter theirs hosts, including wasps and bees, through joints or sutures.

Millena drew information and inspiration from UC Davis alumnus Arnold Menke, a global authority on Ammophila and author of "The Ammophila of North and Central America (Hymenoptera, Sphecidae).

“Strepsiptera are very unusual among parasites in that the parasite is visible on the outside of the host's body,” Rosenheim explained. “The head of the parasite protrudes between the sclerites on the abdomen. Looking across a growing list of species, RJ has shown that Ammophila species where mothers have more extended contact with their young--because they provision their nests with many, small caterpillars instead of one giant caterpillar-- are at much greater risk of acting as inadvertent vectors of strepsipteran parasites to their young.”

“RJ has shown that this one feature explains something like 90 percent of the total variation across Ammophila species in the risk of parasitism,” Rosenheim said. “Ecology virtually never works in such a predictable way; this is one truly exceptional counterexample of nature being highly predictable. Anyway, RJ's work shows that sometimes parental care can be a double-edged sword; we usually think of parental care as providing enhanced protection of offspring from predators and parasites. In this case, it proves to be the reverse.”

Also quoted in the news story was Lynn Kimsey, director of the Bohart Museum and a UC Davis distinguished professor of entomology: “RJ is one of those rare students that is focused, task-oriented and simultaneously creative. She was great fun to have working in the museum.”

ACE, an international association of communicators, educators and information technologists who focus on communicating research-based information, will present the communication awards at its 2022 conference, set June 12-14, in Kansas City, MO. 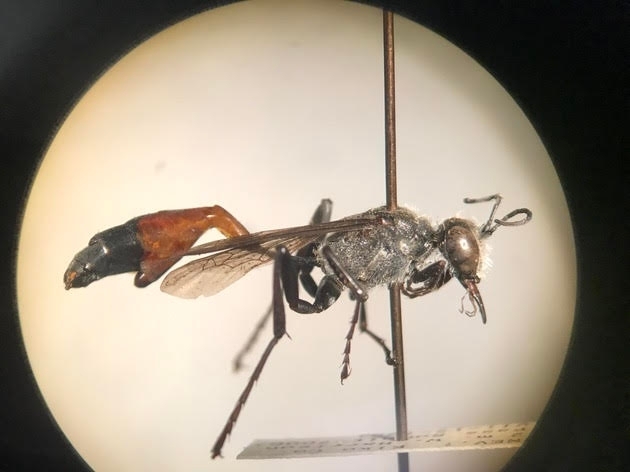 This image of a parasitized Ammophila azteca beneath a microscope is the work of RJ Millena. 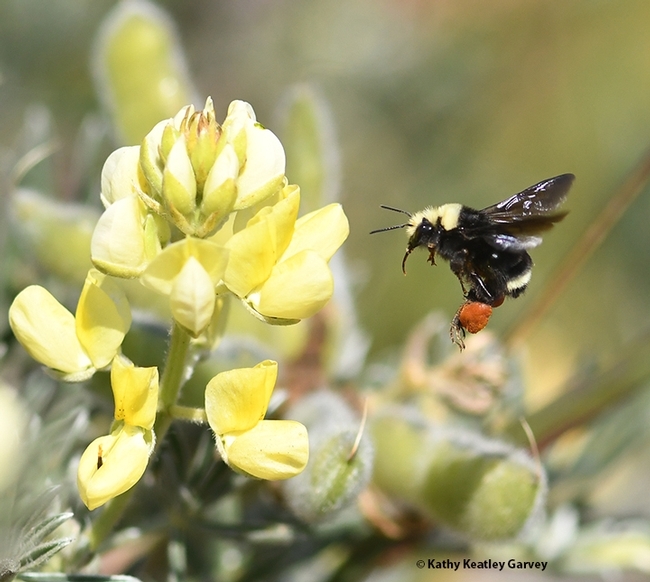