Melon fly (CDFA image.)
CDFA officials have trapped a single male melon fly in a Fresno vineyard, sending shivers down the spines of local farmers who produce its target crops, including cucumber, eggplant, squash and tomatoes, according to a report on the CBS Channel 47 news.

The melon fly is native to Asia, but has spread to other parts of the world, including Africa and the Pacific Islands. Melon flies were first found in California in 1956 and have been captured sporadically over the years, but all infestations have been successfully eradicated. Just last year, eight melon flies were found in Kern County. Trapping last month determined that the Kern County population was eradicated, the story said.

Reporter Tony Botti spoke to UC Cooperative Extension farm advisor Richard Molinar about the potential economic damage of a melon fly infestation to small-scale farms. If the pest is found in greater numbers, CDFA will likely impose a quarantine, which stops farmers from moving any of their products out of the area.

"If they are not able to sell, they are going under," Molinar said. "They’ll take a loss this year and many won't be able to survive a loss." 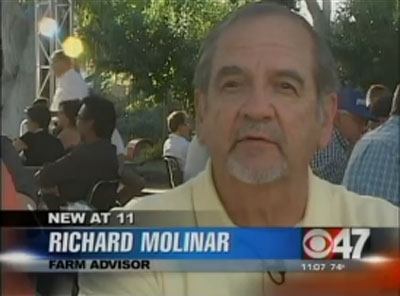