I hide when my husband comes in from working in the yard at the folks' house. It usually involves blood or bruises or swearing. This time it was about how he hates ivy, but this time, no blood was involved.

His parents put this ivy around the house about five hundred years ago. They genuinely loved the look, but being such an invasive plant, it has gotten WAY out of hand despite our attempts to get rid of it. Last summer, we worked hard at pulling it out. At one point, I thought we might have it under control, but not so. It has choked out other plants, climbed trees, woven itself into the shrubs, and clung to the house. When we pulled it away from the house, it seemed like we were pulling it out from under as well.

So, I thought I might be helpful and see if there is a better way to get rid of it for good. Searching the Internet yielded one result from KingCounty.gov in Washington state. Another for our state was Cal IPC (California Invasive Plant Council) where the status of Hedera spp. is high, meaning has severe impacts on how it spreads and establishes.  Unfortunately, everyone else wants to sell it as an indoor plant.

Ivy, Hedera helix, is classified as a Class C noxious weed, and planting it is highly discouraged due to the damage being done to the environment. Four cultivars grow and spread aggressively creating a mat over anything in their path. The small rootlets exude a very sticky substance, and the vines can stick to anything. Then the rootlets grow into the surface. Tree bark is more prone to disease and rot, and structures are damaged. The vines form a mat with the rootlets, and when all over a tree, the mat can act like a sail in heavy winds and potentially blow a tree over! Also, on the ground, water will run under the ivy mat and erode the ground underneath. And if that was not enough, the mat is the perfect hiding place for rodents and snakes.

So, what did I find out about getting rid of it? The most effective way is to pull it out. Not the answer that I was looking for, but good to know that herbicides are not effective on established plants. Once it is out, the area needs to rest and wait to remove any new ivy growth before putting in new plants. Be sure to research your plant selection before planting, it might save you a lot of heartaches. 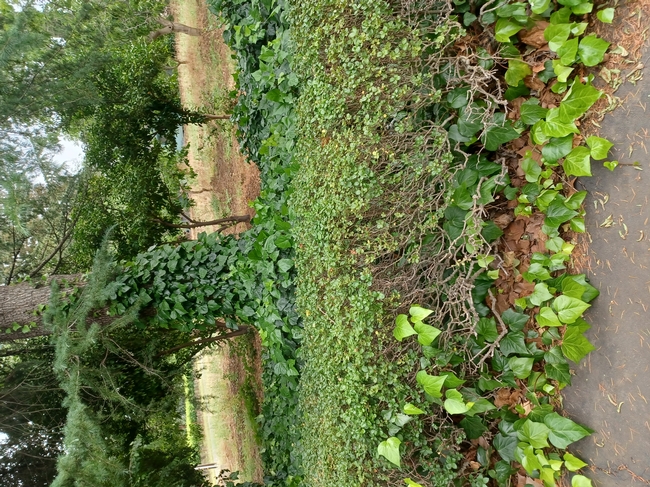 photo by Jenni Dodini
Comments: 2
Comments:
by Howard Fitzpatrick
on July 2, 2022 at 7:18 AM
I totally agree. After a long time and a lot of effort, I have managed to rid our yard of the ivy that was here when the property was purchased in 1978, but it has been a long and constant struggle. The only treatment that I have found that sort of works other than digging and pulling it out is spraying sprouts with white vinegar. I have also discovered that old ivy from a neighbor's yard actually produces seed which migrates to my yard. GRRRR!
by Kathy
on July 6, 2022 at 9:03 PM
Interesting. I'll definitely avoid buying ivy!
Leave a Reply: