A swarm of locusts cast a shadow over Egypt when Pharaoh wouldn't let Moses' people go. Throughout history, locust swarms in most parts of the world have been known to strip farmland and rangeland to the nub. Now, Mariposa County is faced with a devastating population of the voracious insect, according to an article in the Merced Sun-Star.

Reporter Carol Reiter spoke to the interim director of UC Cooperative Extension in Mariposa County, Maxwell Norton, about the 2011 grasshopper population. He explained that this year's wet weather was ideal for the winged pests. When the hills and rangelands where the grasshoppers hatch started drying out, the insects began invading gardens and crops in Mariposa by the thousands.

"They'll eat almost anything green," Norton was quoted. "People all over the foothills have been complaining about the numbers of them this year."

The article said Norton responded to the high grasshopper numbers by offering a seminar to Master Gardeners on how to keep gardens and plants safe from the insects.

He described the use of Semaspore bait for grasshopper control. After eating Semaspore, a product approved for organic gardeners, grasshoppers become sick, eat less and begin to die. The disease spreads to healthy grasshoppers when they eat their dying brethren. The product is safe for people, pets and the environment.

This article also appeared in the Modesto Bee, the Sacramento Bee and the Fresno Bee.

For more on grasshopper management in gardens and landscapes, see the UC IPM Pest Note about grasshoppers. 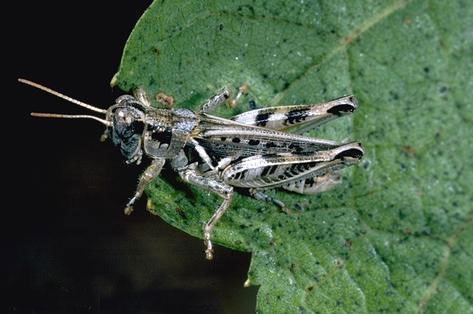