The 1000th tree okayed for growing by California's Citrus Clonal Protection Program happens to be the oldest living orange variety in the state.

The program, housed at University of California, Riverside, is the first of its kind in the world. It began in the 1950s, and its scientists spend up to three years testing and clearing citrus trees of disease so they can be released to commercial and private growers.

By law, every citrus tree newly propagated in California can be traced back to one mother tree created at UCR through the protection program. Program Director Georgios Vidalakis and his group begin their process by testing incoming trees for more than 30 citrus diseases, whether the diseases are known to have emerged in the state or not.

The treatment for any disease identified in that first round of testing is to make a new mini tree from a few cells of the original budwood — short, leafless twigs with buds meant for propagation. “We use special plant cells for this process that diseases cannot penetrate,” Vidalakis said.

After the mini tree grows large enough, program scientists go back and do a second round of testing for disease, making sure they picked the right cells for propagation and eliminating any prior trace of illness

If it passes the arduous second set of tests, the new tree gets a variety index or VI number that accompanies it for the rest of its life, and it is released to the public.

Dubbed the Mother Orange Tree, Bidwell's Bar is a sweet Mediterranean orange brought to California from Mazatlán, Mexico, and planted in 1856. It was first planted near the Bidwell Bar Bridge near Oroville, then dug up and replanted twice.

Its survival skills are some of the reasons Tom Delfino, former California Citrus Nursery Society director, recommended the old orange tree for the protection program.

“Apparently this variety is very rugged,” Delfino said. “Not only has it survived a lot of cold Northern California winters, but the tree has been dug up and replanted twice — once to protect it from impending flood, and again to make way for the Oroville Dam.”

Much of the state's orange industry is based in areas with warm weather. Delfino, who lives in the San Francisco Bay Area, finds citrus an exciting challenge to grow. By suggesting Bidwell's Bar for approval, he was hoping the protection program would clear it so he could buy its budwood.

On the occasions he has visited the original tree, Delfino said the fruit in reaching distance was always gone. “I think it must be tasty because locals grab it for themselves,” he said. “Makes me even more eager to grow and eat my own. I'm extremely pleased the VI testing is completed so I can acquire it.”

Delfino also hopes that this variety will catch on with commercial growers.

“My thought is our citrus industry is concentrated in the southeastern San Joaquin Valley and is subject to a number of pests that like the warm climate there,” Delfino said. “Though this has seeds, which may be a deterrent, it can be grown in colder areas that discourage some of those insects.”

The tree arrived in California nearly two decades before the better-known Washington Navel orange grown by Eliza Tibbets in Riverside. The navel is named for a structure at the bottom end of the fruit, which resembles a belly button. This structure is actually a separate fruit inside the larger fruit. The Washington Navel is also seedless, contributing to its popularity.

“Bidwell's Bar is an example of what was grown in California before the Washington Navel came to dominate, and now that it has a VI number, others can grow it too,” said Tracy Kahn, curator of the Givaudan Citrus Variety Collection at UCR.

Kahn says it's important to preserve the genetic material from a tree with such significance to California. “Some people were worried it was going to die, but now we have an officially cleared source of this historic tree, and it is protected for future generations,” Kahn said. 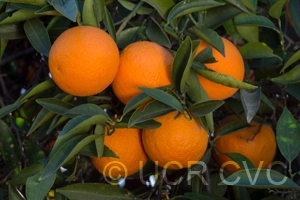 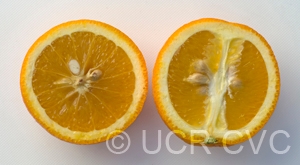 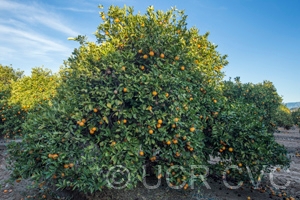