I'm humbled and honored to have received two major awards this week from the Association for Communication Excellence (ACE). It's an international association of communicators, educators and information technologists who focus on communicating research-based information.

Frankly, I prefer to be behind the camera (not in front of it) and I'm accustomed to serving on award-nomination  committees.

I did not attend the ACE annual conference, held June 12-14 in Kansas City, Mo. I was too busy working on faculty award packets and writing and photography projects--and I still haven't figured out how to be in two places at the same time.

However, my Missouri roots run deep. My great-grandfather, Samuel Davidson Laughlin, a six-foot-three Union color bearer in the Civil War, was born in Linn, Osage County. After the Civil War, he ventured west with his family, settled down, and built a round barn in Castle Rock, Wash., now on the National Register of Historic Places.

A distance of about 153 miles separates Linn from Kansas City. It's the "show me" state, so someday I'll show up. Feature Story. The feature story traced RJ's childhood dream of becoming an entomologist to her doctoral fellowship. At age 5, when she entered her kindergarten class in Concord, Calif., she wrote on a poster, "When I grow up, I want to be an entomologist."

How many five-year-olds do you know who vow to launch a career in insect science on the first day of kindergarten?

At UC Davis, RJ worked as a student researcher in the laboratory of UC Davis distinguished professor Jay Rosenheim, where she studied the bizarre Strepsiptera endoparasites that attack their hosts, the Ammophila (thread-waisted) wasps. RJ went on to receive her bachelor's degree in entomology in 2021, and a rare four-year, full-ride doctoral fellowship from the American Museum of Natural History.

Where did she do her research at UC Davis? At the Bohart Museum of Entomology, which houses a worldwide collection of more than 30,000 Ammophila (among the Bohart's eight million specimens). As larvae, members of the order Strepsiptera, known as “twisted wings,” enter theirs hosts, including wasps and bees, through joints or sutures.  Millena drew information and inspiration from UC Davis alumnus Arnold Menke, a global authority on Ammophila and author of "The Ammophila of North and Central America (Hymenoptera, Sphecidae).

As Professor Rosenheim explained: “Strepsiptera are very unusual among parasites in that the parasite is visible on the outside of the host's body. The head of the parasite protrudes between the sclerites on the abdomen. Looking across a growing list of species, RJ has shown that Ammophila species where mothers have more extended contact with their young--because they provision their nests with many, small caterpillars instead of one giant caterpillar--are at much greater risk of acting as inadvertent vectors of strepsipteran parasites to their young.”

“RJ has shown that this one feature explains something like 90 percent of the total variation across Ammophila species in the risk of parasitism,” Rosenheim related. “Ecology virtually never works in such a predictable way; this is one truly exceptional counterexample of nature being highly predictable. Anyway, RJ's work shows that sometimes parental care can be a double-edged sword; we usually think of parental care as providing enhanced protection of offspring from predators and parasites. In this case, it proves to be the reverse.”

Also quoted in the news story was Lynn Kimsey, director of the Bohart Museum and a UC Davis distinguished professor of entomology: “RJ is one of those rare students that is focused, task-oriented and simultaneously creative. She was great fun to have working in the museum.”

As a devoted "bug person" (I've been writing this Bug Squad blog every night, Monday through Friday, since August 6, 2008), it's great to see insects featured in the ACE award presentations.

The sad part: Memories of my first Bug Squad blog, which spotlighted nationally known honey bee guru, UC Cooperative Extension apiculturist Eric Mussen. In the post, titled "A Honey of a Ride," he commented about a swarm of honey bees that "hitchhiked" on a UC Davis commuter van traveling from El Cerrito to the UC Davis campus. Sadly, in an unbearable loss to his family,  friends,  the entomological world, and beekeeping/bee-breeding industries, Eric Mussen died June 3 at age 68 of liver cancer/failure after receiving a diagnosis only a few days before. A celebration of life will take place at the UC Davis Putah Creek Lodge as soon as July or August. 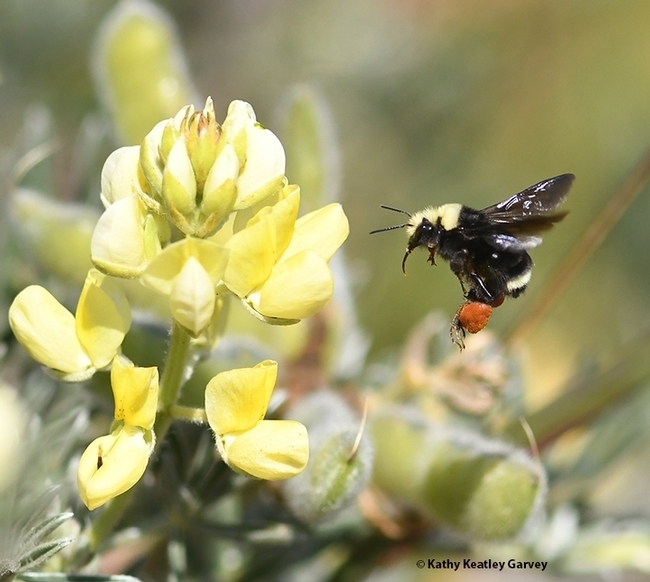 This image of a yellow-faced bumble bee, Bombus vosnesenskii, foraging on lupine at Bodega Bay, was part of a photo series that won an international award from ACE. (Photo by Kathy Keatley Garvey)
Focus Area Tags: Agriculture, Environment, Natural Resources, Yard & Garden
Comments: 2
Comments:
by Rachael F Long
on June 17, 2022 at 7:20 AM
Congratulations! Thanks for sharing! Great work!
by Linda Haque
on June 17, 2022 at 8:19 AM
Congratulations, Kathy! A well-deserved acknowledgement of the value of your work.
Leave a Reply: